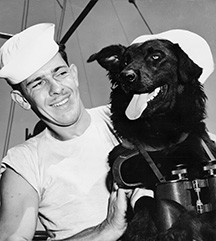 His name was Sinbad and similar to his fellow guardsmen, he came complete with all of the necessary forms and uniforms. He was given his own bunk. He was also disciplined for misbehavior like the rest of them, and “busted in rank a few times.” He was like most other guardsmen, except for the fact that he had four paws and a wagging tail. Sinbad was a sea dog, and a good one at that.

The mixed-breed puppy was adopted by the crew of Campbell in 1938 and served onboard for 11 years before retiring to the Barnegat Light Station. Though he was faithful in serving the USCG, it wasn’t without a few minor mishaps.

As Eddie Lloyd, the late editor of the old Coast Guard Magazine said: “Sinbad was a salty sailor but he’s not a good sailor. He’ll never rate gold hash marks nor good conduct medals. He’s been on report several times, and he’s raised hell in a number of ports. On a few occasions, he has embarrassed the United States government by creating disturbances in foreign zones. Perhaps that’s why Coast Guardsmen love Sinbad – he’s as bad as the worst and as good as the best of us.”

Despite all of that, when he was honorably discharged (they discounted his two Court Martials), his collar included six campaign ribbons and five battle stars. He had attained the rank K9C Chief Dog and was a beloved mascot and morale booster for the USCG (even though he first gained media attention for his presence at bars in ports of call).

It is the story of this lovable pooch that ushers visitors into Door County Maritime Museum’s (DCMM) newest exhibit, Sea Dogs, which opens this Saturday.

“He acted like the rest of the crew,” said Amy Paul, DCMM marketing and communications manager. “He went on leave with the crew, slept with the crew, but there are a lot of World War II clips about him because he kind of became the hero, mascot, a favorite so we’ve got a lot of clips of him and his adventures. They said at one point that they even court martialed him because he missed the boat … the next captain of the ship came onboard and pardoned him so he could stay onboard.” 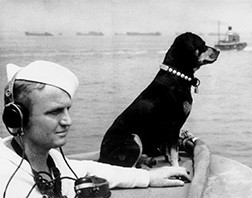 While Sinbad gets the spotlight at the exhibit, a number of other canines (from ships mascots to beach and light patrollers to fishing and lifesaving dogs) are recognized for their contributions to maritime history.

“People ask, ‘Why sea dogs?’” Paul said. “We wanted to bring in something that would be exciting to the public but as a history museum, we are connecting the history of dogs on the water with family-friendly activities. So the sea dogs, for thousands of years they’ve been involved, they’ve been in lighthouses, they’ve been on ships, they’ve been military mascots.”

Paul said DCMM was inspired to create the exhibit after seeing something similar done by Connecticut-based Mystic Seaport: The Museum of America and the Sea. Given Door County’s nearly 300 miles of shoreline, there was a plethora of local maritime pooch history that they were able to bring in to give it a local feel.

The exhibit’s educational aspect comes out in historic displays, hands-on activities, videos and several interactive portions wherein children and adults can assume the role of a sea dog in beach patrol, sounding the foghorn, and maneuvering through a ship.

It’s just another example of how DCMM is bridging the gap between history and technology.

“The interactives are a very important part of new society,” Paul said. “We want kids to learn history, so you have to be interactive. Even adults. These interactives help us experience what might have been in history.”

But it’s not all screens and displays. Museum volunteers came together to build a small children’s play area, complete with dog beds, a “What do you smell?” sensory portion, toys, nautical costumes, and a child-sized dog house that children can play in (after crafting a set of dog ears and sailor hats, of course).

Sea Dogs opens with a morning and afternoon of activities May 16 from 10 am – 2pm, including children’s crafts and games, photo opportunities with Fred the Chicago Fireboat Dalmatian, and dog agility demonstrations with Diana Verhagan and her German shepherd Chaos (10:30 am, noon and 1:30 pm).