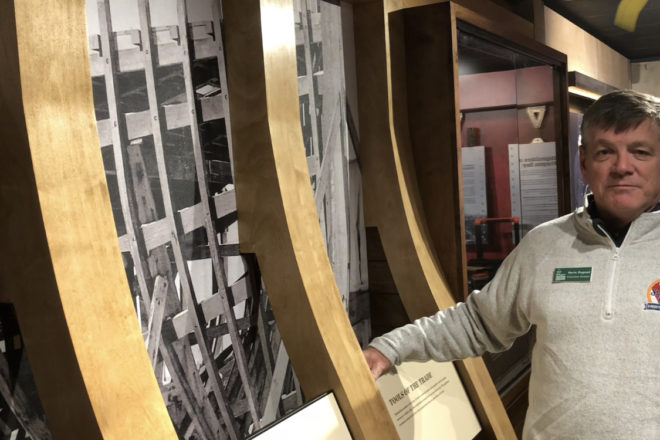 Lit in green and red for the holidays, the Jim Kress Maritime Lighthouse Tower at the Door County Maritime Museum in Sturgeon Bay has been looking good this month on the outside.

Inside, it’s also looking good following the completion of the fifth floor’s Shipbuilding exhibit. During the two weeks before Christmas, installers from Southern Custom Exhibits also put finishing touches on the eighth floor’s People of the Water display.

They spent most of their time on the fifth floor, however, transforming an empty room into a mini museum that tracks Sturgeon Bay’s shipbuilding history, starting with the European wooden-boat builders of the 19th century.

Wooden-hull ribs outline priceless photos from those early days, and miniaturized aluminum girders outline some of the 20th-century exhibits. A ship’s stern and prop make the backdrop for most of one wall, with storyboards hanging from pulleys and representations of industrial overhead cranes.

Kevin Osgood, executive director of the Door County Maritime Museum, said he’s always amazed by how Southern Custom Exhibits expedites installation by fabricating all of the exhibit ahead of time in Anniston, Alabama, before loading it in pieces onto trucks.

Laurence Thomas, a Southern Custom Exhibits scenic director and project manager who previously created the intricate shipwreck exhibits for the tower’s second floor, served as the installation manager for the fifth floor. He described the company’s process.

“We take the footprint of this room, and we lay out all the walls, build all the structures, build all the rails and anything that may go with it, transmit the graphics and measure the wallpaper,” he said. “We install the lights and the electrical parts of it, and prewire all that we can, and then put it all on the truck.”

Thomas pointed to a rectangular box above one wall of displays and noted that electricians wired the header and its small spotlights in Alabama.

“All we have to do is make a connection when we get here. Everything was finished and made to fit through the elevator” of the museum, he said.

“We have several tradesmen who do several different things,” Thomas said.

Osgood said the exhibits throughout the tower made great transformations after the initial conceptual drawings during Phase Zero, when an interpretive planner, project leader and graphics designer spent a week in Sturgeon Bay for preliminary planning a little more than two years ago. The resulting storyboards throughout the museum keep things brief and pithy, Osgood said, so visitors can keep moving, whether in the tower or in the original museum building.

“There’s a lot more content developed than what is on each floor,” he said, “but that will eventually make its way into a digital platform, so when guests come into the tower, if they want that deeper content, they can get it.”

The next exhibits that Southern Custom Exhibits crews will complete in Alabama will be for the ninth floor – a Door County geology story called Our Rocky Peninsula – and for the fourth floor. That one will be Recreational Boating.

Osgood anticipates having all of the tower’s exhibits open sometime in March. Most certainly, all portions of the tower will be ready by the time tourists arrive around Memorial Day, when it’s once again pleasant on the top floor to browse the 10th floor’s interactive Our Working Waterfront exhibit.

He said it’s not unusual to take two years to complete an installation process of this magnitude.

“I think if we rushed it, nobody would be happy with the experience, and I know this team wouldn’t be happy installing less than top-level exhibits,” Osgood said.

He noted that the original museum building will also see updates and a reworking of exhibits during the next two years, allowing for better curation and interpretation of the artifacts, information and documents that fill its storerooms and two off-site storage facilities.