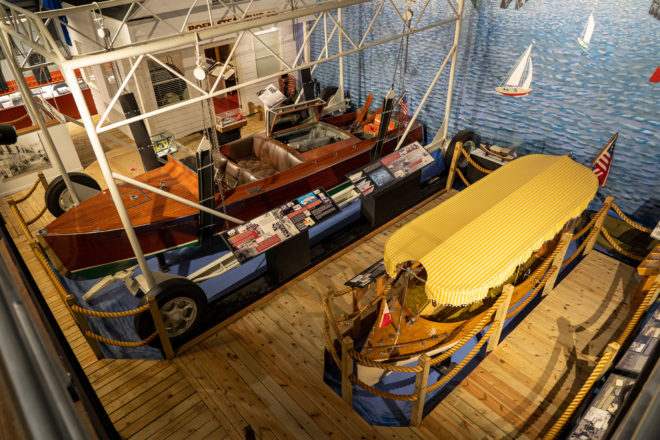 Looking down into a completed exhibit area. Photo by Rachel Lukas.

The news came to the museum via a phone call from the governor’s office at 4:55 pm on Tuesday, Feb. 1, in advance of the press releases.

Perlman finds and writes grants for the organization that’s based at the museum in Sturgeon Bay. This grant for Tourism Capital Investment had a short window of application for the federal American Rescue Plan Act dollars that were received by the state and are allocated by Gov. Tony Evers at his discretion without input from the legislature. The latest grant awards ranged from $29,000 to the maximum of $3.5 million for shovel-ready, tourism-related investment projects that help to promote, maintain or bolster Wisconsin’s tourism industry by building, expanding or maintaining  travel-related infrastructure or public attractions. The grant program received 200 applications, and Evers funded 27 of those across the state, totaling $21.9 million.

Meanwhile, back at the maritime museum, Perlman and the organization’s executive director, Kevin Osgood, did not reveal the news during an executive committee meeting the morning after the phone call because they were still in disbelief that they had received the entire amount of their request.

“You go through this process with all grants asking for the stars and settling for the moon,” Perlman said.

No settling here, as it was soon affirmed, putting a good night’s sleep within reach for the organization’s entire staff.

“This is a team effort,” Perlman said. “Everybody here has been focused on this project for so long.”

A ribbon-cutting ceremony scheduled for Friday, Feb. 11, 10 am, marked the opening of two more floors of exhibits within the Jim Kress Maritime Lighthouse Tower: Shipwrecks on the second floor and Navigation on the seventh.

That makes four thematic floors completed in addition to the Baumgartner Observation Deck. The first two – Working Waterfront, floor 10, and Stewardship, floor 1 – opened during the tower’s christening in May 2021. Next up will be Life Underwater (floor 3), Commerce (floor 6), Shipbuilding (floor 5), People of the Water (floor 8), Our Rocky Peninsula (floor 9) and Recreational Boating (floor 4).

The 118-foot, 10-story tower – the tallest building in Door County and the fifth tallest in northeastern Wisconsin – was christened in May 2021. At that time, only the rooftop Baumgartner Observation Deck and two floors of interactive, educational exhibits had been installed by Southern Custom Exhibits, yet the Alabama company has been pushing forward during the past year with design, fabrication and installation. Two more floors will open Feb. 11.

“Nothing has slowed down; nothing has stopped,” Osgood said. “At this point, every single floor is in some stage of development.”

The exhibit end of the project will cost $2.2 million all in, and “our agreement is we pay them monthly as we go along,” Osgood said. “And then this comes in.”

There’s still $30,000-$100,000 to be raised beyond the grant award, but the museum’s leaders are confident they’ll get there and are looking forward to the grand opening to be held on National Maritime Day, May 22. Osgood said all but two of the floors are expected to be completed by that day, barring any worker shortages due to COVID-19 or supply-chain challenges to acquire basic items such as plywood.

Though the tower won’t be completed until this year, the organization hosted a record number of visitors last year at its properties: the museum in Sturgeon Bay, Death’s Door Maritime Museum in Gills Rock and the Cana Island Light Station just north of Baileys Harbor. Typically, the three properties combined sell 60,000-70,000 admission tickets, but in 2021, they welcomed a record 102,000 visitors: 8,000 to Death’s Door, 37,000 to the Sturgeon Bay location and 57,000 to Cana Island.

“Those are hard numbers, not estimates,” Osgood said, calculated from the admission fees required to visit the properties.

On one rainy Wednesday following the Fourth of July, they had a record 667 guests within the Sturgeon Bay location at one time. On that day, they closed the museum for 90 minutes because the building had reached capacity. Osgood stood outside, redirecting visitors to places for lunch or to other area attractions, such as the Door County Historical Museum.

And that’s the exciting part, he said, for “the whole West Waterfront. Lots of people spent a lot more time in our neighborhood.”

The organization believed 2021 would be a record year, but they closed out this January with a 38% increase in visitation over last January.

“That’s pretty amazing,” Osgood said. “The challenge is going to be hiring seasonal staff. This grant doesn’t pay for that.”