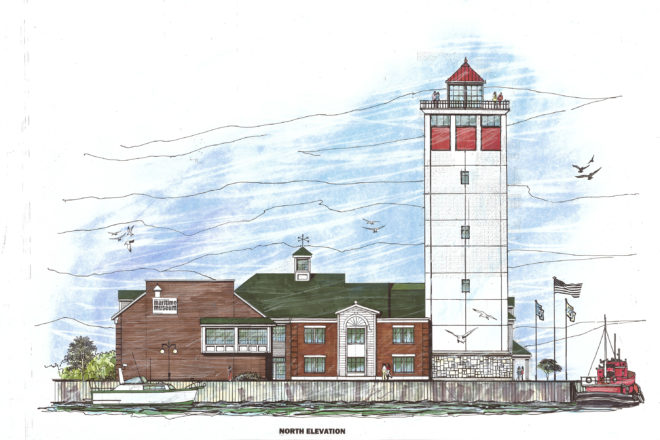 A rendering of the planned 11-story tower addition to the Door County Maritime Museum in Sturgeon Bay. Image by Ben Shenkelberg.

This past fall, the Door County Maritime Museum in Sturgeon Bay announced its intent to expand its facilities with an 11-story tower. The tower is intended to serve as an observation platform and to provide additional space to house new exhibits. Since then, the project has been quietly moving forward.

On May 18 the project received state approval. According to Mike Maves, the museum’s Development Programs Manager, the entire project is estimated to cost $4.3 million. Since active fundraising began in the final months of last year, the project has received close to a million dollars in pledges.

“We have been encouraged by the response and commitment [of the community],” Maves said.

The project has been in the works for a while, but it has only recently become a major initiative for the museum.

“It’s probably been active for 10 – 13 years, so it’s not a new idea,” Maves explained, “but the president of the museum, Bill Harder, has taken this and moved it quite aggressively.”

As steps are taken to provide funding for the tower, the museum must begin to plan its exhibits.

“All of the exhibits we are going to try to make digitally interactive,” Maves said. “Making these interactive so that the people can push buttons, see something happen, and get engaged.”

Topics of consideration include the county’s underwater heritage, weather experiences on the peninsula, recreational boating, fishing and other maritime commerce.

“We have a theme here for the museum,” Maves explained. “We tend to really highlight the traditions, the history of the maritime tradition in the broadest sense in Door County and for Sturgeon Bay in particular.”