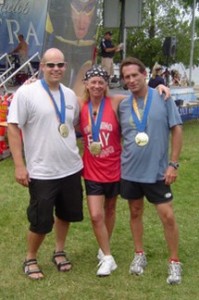 In sweltering heat that blanketed the county all day, 906 participants survived the half iron distance of the Door County Triathlon Sunday, July 18.

Madison’s Mark Harms, fittingly wearing bib number 1, came out on top, finishing with a time of 4 hours, 13 minutes and 41 seconds. Coming in second was Mike Lavery, also of Madison, in 4:23:52. Lavery was closely followed by Cameron Knuth, who completed the race in 4:25:25.

In the sprint course held Saturday, July 16, participants from Milwaukee and Madison finished first in the men’s and women’s divisions, respectively.

Matt Behnke of Milwaukee crossed the finish line in 1:08:38. Finishing a minute and 42 seconds later was Cedar Rapids’ Ron Gierut, who beat Behnke in the bike by over a minute but fell behind in the run. Danny Voelker of Peoria, Il. finished third among the men, with a time of 1:11:08.

For the women, Lauren Bierkel of Madison led in each category, finishing with a time of 1:14:08. Kewaunee resident Tracy Valenta finished in 1:18:39, followed by Green Bay resident Robyn Lauritsen in 1:21:58.

Among the men’s relay teams, the trio of Casey Lamers, Gordy Paulson, and Derek Scheer finished first by far with a time of 4:32:57, nearly an hour ahead of the second place team.

The women’s relay division was headed up by the team of Karen Puchalski, Mary Bolich, and Jodi Gerth, with a time of 5:04:18.

Finally, among the mixed relay teams, the first-place team of Steve Ellenbecker, Cheri Ellenbecker and Ellen Peterson finished in 4:47:34.

In the men’s relay, the St. Louis team of Chris Gorman, Phillip Hoehn and Tim Hoehn came out on top with a time of 1:22:08.

The women’s relay was headed by the team of Angie Mielke, Becky Struck and Kayla Bower, who finished in 1:23:07.

Finally, in the mixed relay, a team led by Sturgeon Bay residents Mary Cram and Kenneth Wright III, along with Waupaca resident Dominic Frandrup, took first with a time of 1:24:03.

The seventh annual triathlon was the biggest yet, with 1091 people finishing the sprint events (including relay participants) and 906 surviving the heat in the half iron events.