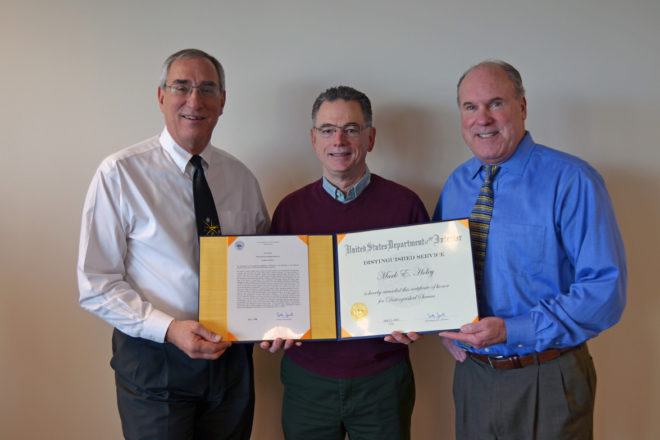 As a kid growing up in Freeport, Ill., Mark Holey developed a taste for trout fishing that he thought he could turn into a career with the Wisconsin Department of Natural Resources.

Holey was introduced to the sport of trout fishing while a sophomore in high school through the owner of a Freeport radiator shop who had no children of his own, but liked to teach kids how to fish.

After high school, Holey decided to attend the college of natural resources at the University of Wisconsin-Stevens Point, where he earned both his bachelor’s and master’s degrees.

“I actually did my master’s work on a trout stream near Stevens Point,” Holey said. “I was all raring to get hired by the DNR to manage trout streams.”

But when he graduated from college, the DNR had only four fish biologist openings.

“I was the last one to get hired and the only position left was in Milwaukee,” Holey said. “You can imagine someone that likes to trout fish going to Milwaukee. Not the place I really wanted to go.”

Suddenly, Holey found himself working with commercial fisherman who were going after deepwater cisco, which are sold as smoked chub.

“That was my introduction to the Great Lakes,” Holey said.

He spent the next five years working with commercial fisherman from Kenosha all the way up to Door County, when the DNR station supervisor position opened in Sturgeon Bay.

“When we moved here from Milwaukee my boys – I have twins – were six months old,” he said. “My dad mentioned that all the stress points in life – new job, new house, having kids and moving – I did all four of those when we moved up here.”

Luckily, he said, there were plenty of welcoming folks that helped his family get through all the stresses that came with the move into a new home, the new job and two new sons, which is why after nine years as Sturgeon Bay station supervisor, Holey took a new job to lead the Green Bay office of the U.S. Fish and Wildlife Service.

“This allowed me to work on a lakewide basis instead of just in Wisconsin waters,” Holey said.

Yet, Holey decided to keep his home in Sturgeon Bay and make the commute to work in Green Bay.

“We enjoy it here,” he said. “Eleven years ago we decided to build a new house, and built it with the idea of being here for a while.”

Now 63, Holey recently retired after 39 years of public service, and was recognized with the Distinguished Service Award, the highest honor to be granted by the Department of Interior, which oversees U.S. Fish and Wildlife.

The award cites Holey’s distinguished service in efforts to conserve native Great Lakes fish species such as lake trout, whitefish and sturgeon. He was also recognized for his work in negotiating and implementing decrees with tribal fisheries in the upper Great Lakes.

In both the DNR and Fish and Wildlife jobs in Sturgeon Bay and Green Bay, Holey oversaw construction of new office buildings for his departments. He’s been involved in the Fox River cleanup and various fish restoration projects, such as collecting deepwater cisco eggs from Lake Michigan and shipping them to Ontario for cisco restoration efforts in Lake Huron.

“We’ve been able to send them more than a million eggs a year,” he said.

There was also the mass tagging of Chinook and lake trout in both lakes.

“Since about 2012, we’ve tagged every Chinook salmon and lake trout stocked in Lake Huron and Lake Michigan,” Holey said. “We’re tagging anywhere between 10 and 12 million fish a year. What that allows us to do is figure out where they move.”

Holey said while he absolutely loved the work he did for the Great Lakes, “I’ve done this for 39 years and there are other things I would like to do.”

He mentions that travel out of state was a requirement of the job, and he realizes now that there are many places in Door County to be explored.

“I might get involved more around the county, maybe at The Ridges and things like that,” he said. “My work was fascinating and very rewarding, but now’s the time to get more involved locally. There’s lot of great stuff being done here in Door County.”