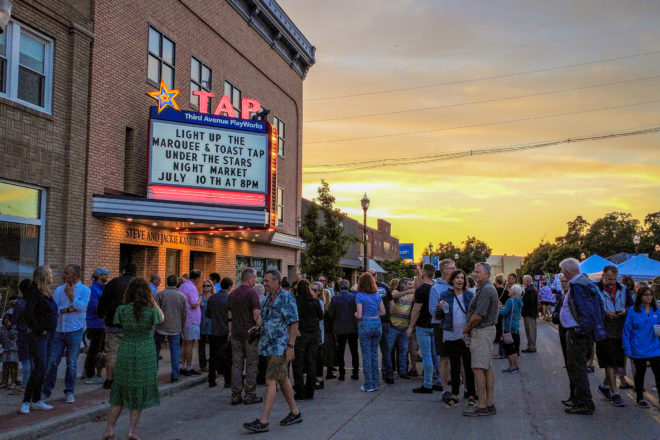 At Sturgeon Bay’s first Under the Stars night market of 2021, Third Avenue PlayWorks (TAP, transitioning from Third Avenue Playhouse) lit up the market with the brightest star of the evening: The historical marquee has been restored with 140 light bulbs, and it shone again on Saturday night, symbolizing the fundraising success for TAP’s renovation and its reopening later this year.

“This is an important part of the arts,” Ward said. “It gives us a lot of balance. We’re a shipbuilding and manufacturing city, but we need the arts for interest and culture.”

Artistic Director Robert Boles recalled TAP’s early days and announced that the first show, once renovations are complete, will be Gutenberg! The Musical!

Gwenn and Joe Graboyes, who contributed one of the first major donations to the renovation campaign, hosted a toast as they flipped the switch to light up the marquee in flashing neon colors that traced a star shape and spelled out “TAP.”