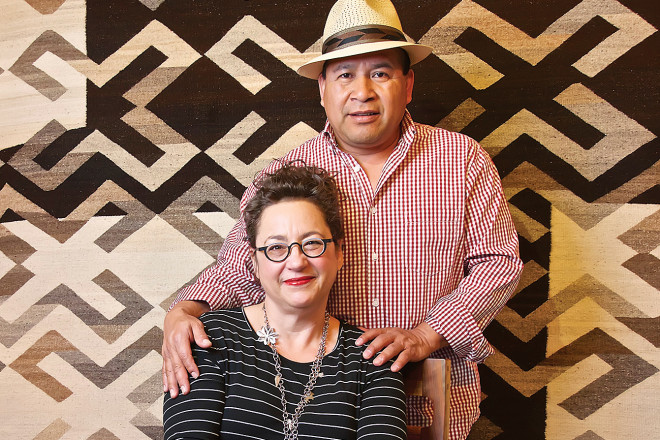 On a late spring day, brilliant with green and sunshine, I arrived at the studio/gallery of Wence and Sandra Martinez, set in a small, whitewashed barn on their Jacksonport property. As I wandered the gallery looking at Wence’s distinctive flat-weave designs and Sandra’s abstract, organic images, I could hear the easy hum of the couple’s give and take upstairs in the studio. A few minutes later, they came down the wooden stairs to greet me and we settled into a semi-circle of chairs. As we began to talk, their warmth and enthusiasm spilled over like the May sunshine pouring through the door. 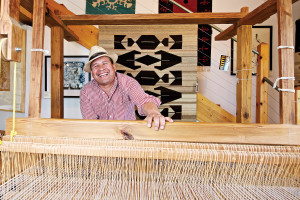 Martinez Studio will celebrate its 20-year anniversary next summer. Wence and Sandra, artistic and marriage partners for 25 years, live and create on their homestead just off of Highway 57 on Door County’s “quiet side.” A master weaver, Wence is a native of Oaxaca, Mexico, and brings his Zapotec heritage and more than 40 years of experience to bear on the gorgeous flat-woven wool tapestries he creates. The weavings feature patterns of his own design as well as those of his wife, Sandra. Sandra’s intuitive and primitive glyphs are informed by automatic writing and Haitian metal work, and are also translated to large-scale paintings on paper as well as functional art such as handbags and scarves.

The couple met in 1988, when Sandra, upon the advice of two Door County friends, traveled to Oaxaca to seek a weaver for her designs. Trained as a potter, Sandra had recently given up ceramics to focus solely on drawing. “I was travelling a lot at the time and I wanted to be able to do my work wherever I was, even if I just had pen and paper,” she says. And she was becoming increasingly interested in the abstract graphic images her mind was creating as she engaged in what she sometimes calls “shamanistic drawing.” 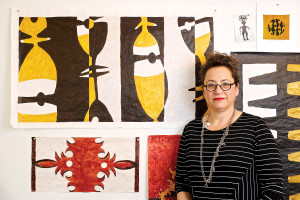 Finding a weaver who would take on the job of creating an original design was a challenge – until she met Wence. “I really love a challenge,” he says. “And I was bored with the traditional production of the same patterns over and over.” Their collaboration in Oaxaca was the beginning of a fruitful union, and their resulting work was immediately recognized by Chicago institutions, including The Field Museum and The Mexican Fine Arts Museum (now the National Mexican Museum).

The couple moved back to Door County, where they started a family and continued to make art, but living in a small apartment above Egg Harbor’s Greens ‘N Grains Natural Foods Market limited the scope of their work. “We had no place to dye wool,” says Wence. “And we had a loom in the boys’ bedroom – they had to have a bunk bed,” laughs Sandra.

Wence and Sandra asked a friend if they could use her chicken coop as a studio/gallery, and shortly thereafter Martinez Studio was born. They relocated to their present space in 2001. “It’s key to be in a place that is not so crowded,” says Wence, referring to their location on the lesser-travelled east side of the peninsula. “We need time to do our work.”

Sandra’s background as a potter informs her perspective. “I come at this from a craft background,” says Sandra. “The work is purely functional – meant to be hung on a wall or used on the floor. I love the change in perspective when people put our work on the floor.”

The Martinez’s favorite spinners in Oaxaca, Dona Maria and Lucina (below). Photos by Wence Martinez.

Wence’s work continues to change and evolve. “His love of pattern is in his bones,” says Sandra, “but he’s not creating the traditional patterns.” As for Sandra, she is deeply influenced by Wence’s use of color, which consists of the strikingly beautiful varieties of wool produced in his home town of Oaxaca – both naturally occurring shades of brown, grey and black, as well the wool Wence dyes by hand. “He mixes three or four different dyes in a pot,” says Sandra. “He’s like a painter that way.”

And Sandra’s designs are constantly shifting, too. “My drawing is a meditative process, the images dictate themselves.” She admits her glyphs have lately referenced both plant and human figures. “That makes sense,” she explains. “It reflects people wanting to be connected to everything, since we are living in a world that is so disconnected.”

The couple feeds off of each other, finishes each other’s sentences, and laughs often. “We’re always collaborating,” says Wence. Sandra puts it a little differently:  “We’re in each other’s faces a lot.”

For years, Wence and Sandra have been focused on the joyful union of their talents, nurturing their gallery and their relationships with collectors, and living and raising their two sons in Door County. They take pride in the fact that they don’t have gallery staff, and that collectors and visitors who come to the gallery are welcomed to sit, visit and discuss – just as they welcomed me. “Our customers like dealing with us directly. And we’ve developed such wonderful friendships over the years – we know each other’s stories and we ask about each other’s children. Galleries in the cities, where many of our customers come from, can be formal, but when they come to Door County, they cross that bridge, they can breathe, they’ve got their comfortable shoes on. We’re so happy to be a part of that feeling,” says Sandra.

Wence and Sandra are grateful that they have had a chance to develop their work over many years. “Because people have supported us, and bought our work, we’ve been able to continue creating and developing,” says Wence. 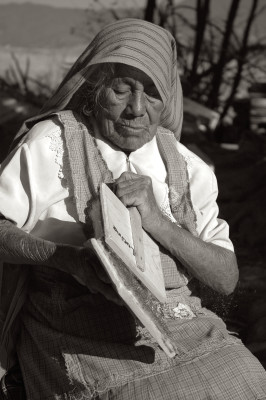 But last fall, their careers took a heady turn when they were selected to participate in the 31st annual Smithsonian Craft Show, an honor that is often sought and rarely bestowed. “We had applied the year before, and we hadn’t gotten in, we weren’t expecting to get in. But we tried again, and when we got the letter that we’d been accepted we were so excited. It’s an incredible honor.”

The couple spent the winter preparing for the show, and the five days at the Smithsonian went beyond their wildest dreams. “People at this show are dedicated lovers of craft,” says Sandra. “They knew about weaving, they knew about the traditions of Oaxaca. It was a different kind of conversation.”

There were also plenty of visitors who knew about Wence and Sandra and their ties to Door County. “We had people from the county come and seek us out,” says Sandra. “There was a lot of hugging and squealing.” Visitors unfamiliar with their work were intrigued. “There were strangers,” says Wence, “who wanted to know all about Door County and where we are from. They told us, ‘I hope you come back again next year.’”

And, of course, there was Martha Stewart, who was the guest of honor at the event. She stopped by the Martinez’s booth, touched the tapestries and remarked several times, ‘Beautiful work!’ “She even took some pictures with her cell phone,” says Sandra.

But to Sandra and Wence, one of the most meaningful encounters was with a collector who works as an attorney specializing in mediation and divorce. “He came to us and really wanted one of our pieces,” Sandra says. “He told us that it was the kind of work that he wanted in his office because it would help calm people who were under a great deal of stress. That was a huge compliment to us.” 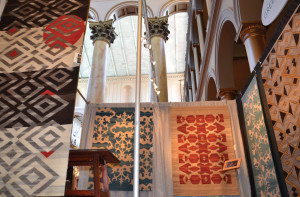 Sandra and Wence plan to apply to the Smithsonian show again next year, and will also reprise their appearance at the Architectural Digest Home Design Show in New York City, where designers from around the world source materials for use in high-end homes.

Despite all the attention they received, Wence and Sandra have no plans to move on. “There are so many beautiful people here in Door County, and so many other artists who are incredibly supportive of each other,” says Wence. “What we want is to keep on doing a better job on our designs every day.”

The Martinezes are obviously most at home in their studio. As they prepare to head back upstairs to the weavings, mock-ups, clippings and drawings that comprise their works-in-progress, Wence says, “I can’t see myself anywhere else. We’re just happy here.”