In 1992, the Door County Historical Society named Mary Ann Johnson Historian of the Year and presented her an engraved plaque and a lovely hand-lettered certificate. It would have been appropriate to include a kungenskrona (that’s Swedish for tiara) with Baileys Harbor spelled out in gold letters. 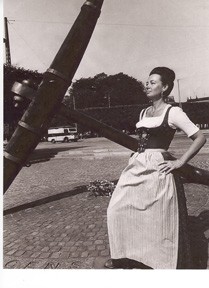 In 1990, Mary Ann was the force behind the establishment of the Baileys Harbor Historic Research Society. The group sponsored many lectures and other activities in hopes of getting residents interested and involved. No one has done more to discover and preserve the history of her adopted town.

Mary Ann and her husband, Jim, first vacationed in Baileys Harbor in 1963, when their children, Lisa and Chris, were two and eight. They stayed at Maxwelton Braes, where ladies still dressed for dinner in long gowns and their best jewelry. They fell in love with the friendly little town, where life was slower paced than in Lake Forest, Illinois.

They asked Harry Ridings, manager of Maxwelton Braes and a nephew of the McArdle family, if he knew of land for sale, and he referred them to a woman who lived near the Baileys Harbor Yacht Club. A recent widow, she was eager to sell a lot on Frogtown Road with a fine view of Lake Michigan. The Johnsons bought it and began to search for a design for a Scandinavian-type house. In 1964, they rented a cottage in Egg Harbor that belonged to the Cowles family, owners of Horseshoe Bay Farms, and hired Willard Erickson as their contractor. Their home was completed in 1967.

Two years later Mary Ann opened Hjertehjem, a Scandinavian import shop. She was well prepared for a business venture. At St. Olaf College, she’d majored in history and Spanish and minored in French. While working at her first job with an export/import company in Chicago, she studied German. Because of her fluency in languages, she was sent on selling trips to Mexico and Central America. She also became adept at clearing goods through customs at O’Hare, a skill that was invaluable when she began to import her own merchandise.

That first year, Hjertehjem was located in what is now Nelson’s storage building, then owned by Florian Kwaterski. Mary Ann’s store was also located in a building originally owned by Ernald Viste, now part of Nathan Nichols, and finally in the old home of Voeks Grocery Store. Mary Ann operated the shop for 42 years before closing it in 2011.

Beginning in 1972, she made annual buying trips to Norway, Sweden, Germany, Austria and Iceland, traveling alone by train, staying and eating at hotels and restaurants favored by businessmen and local residents.

“I saved money and ate well,” she says. 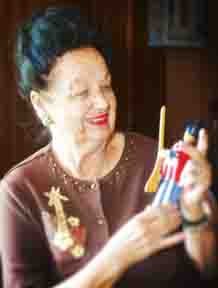 Mary Ann Johnson at her home in Baileys Harbor with a Danish Royal Guard figurine, one of the many Scandinavian items she has imported over the course of her life. Photo by Len Villano.

Hjertehjem, with its unique stock of European clothing, along with home accessories with rosemaling and furniture created by Evelyn and Bob Helm, drew many customers to Baileys Harbor, and Mary Ann loved visiting with them. She once outfitted an entire wedding party in Swedish garments and, for many years, staged fashion shows and luncheons at Maxwelton Braes and the Baileys Harbor Yacht Club. But the shop was just one of her consuming passions.

As Mary Ann made friends with “old-timers” in Baileys Harbor – Janette and Catherine McArdle, Olivia and Lee Traven, Elsie Anclam, Pat Tishler, Roland Peil, Kenneth and Marguerite Zak and Ernald Viste – she became fascinated with the town’s history and began to write it down.

“Chan Harris, then editor of the Door County Advocate, encouraged me to record the old stories, and starting in 1990, he printed everything I wrote,” she says.

Dozens of detailed accounts appeared in the newspaper, and Mary Ann also created 24 videos that were made at dinners she organized over many years. The videos can be checked out from the Baileys Harbor library, and another set is stored at the town hall.

In 2000, Mary Ann achieved the rare feat of simultaneously getting three Baileys Harbor buildings on the National Register of Historic Places: the “Bird Park” home of Albert Zahn, the Grandma Moses of wood carving; the Blacksmith Shop and Inn, once the home of Albert’s nephew, August, who also owned the blacksmith shop next door; and the town hall and library donated by noted businessman Michael McArdle.

In 2003, Mary Ann organized a cemetery walk, with Kristin Peil and Sue Bauldry, wearing dresses from Mary Ann’s collection of antique clothing, riding in a white carriage pulled by a white horse rented from Mayberry’s in West Jacksonport. Residents told of the lives of the people buried in the local cemetery, and the Baileys Harbor Women’s Club, always supportive of Mary Ann’s activities, served coffee afterward at the town hall, along with a cake bearing a picture of the cemetery.

Mary Ann is a proud alumna of St. Olaf College in Northfield, Minnesota. Every August since 1985, she’s hosted a luncheon at Gordon Lodge for about 50 alumni, friends and incoming freshmen. For many years she assembled a group to march in Baileys Harbor’s July 4th parade, chanting their college cheer. (Now in their 80s, they cheer from the sidelines.)

Another of Mary Ann’s consuming interests is the history of her own family. All she had to start her search was a 1906 photo of the farm in Sweden her mother’s ancestors left in 1874. She set out, 114 years later, traveling across Sweden by train, photo in hand, stopping at every little town she’d ever heard her mother mention. Lutheran pastors promised to keep looking but had no immediate contacts. Finally, a bank clerk in Nasum, Sweden, recognized the farm in the picture and called the current owners, who left the fields and rushed to town to meet Mary Ann.

“We always wondered,” they said, “whatever happened to Inger Oldsdottir and Per Anderson who went to Minnesota!” The next year, eight relatives came to the United States to visit Mary Ann, and she has been back to Sweden to visit them.

“It’s astonishing,” she says, “what one little picture could do.” She’s currently working on a family history for her children and grandchildren, and Scandinavian Airlines has requested a copy.

Mary Ann misses visiting with people at Hjertehjem, but these days she does her socializing at Espresso Lane. And, as has been the case since 1963, she remains one of Baileys Harbor’s biggest fans.