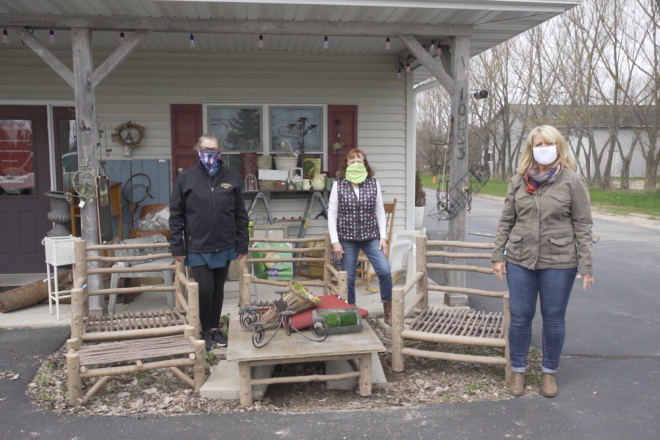 If federal, state and local agencies are recommending face coverings, why isn’t everyone wearing them?

Fighting COVID-19 together doesn’t mean everyone is united on how to stop the spread, especially when it comes to wearing face coverings in public.

A quick trip to an open store will reveal that some people wear masks and others do not. On social-media posts where masks are the topic, some passionately out “non-maskers” while others passionately rise to their defense.

This divide on mask-wearing makes it even more challenging for Door County business owners who are preparing for a safe seasonal opening under the cloud of a global pandemic.

That was the case this past weekend for Todd Frisoni, owner of the Door County Ice Cream Factory in Sister Bay. He had installed multiple signs to keep customers moving within safe distances from each other, and he and his crew wore face masks for what they believed would be a trickle of locals, given Wisconsin’s Safer at Home order.

What he was unprepared for was the steady volume of visiting customers – he estimated they made up close to 75 percent of his business that weekend – and enough arrived without masks to make him nervous.

“To be quite frank, it was scary,” Frisoni said.

He closed shop for a few days after the weekend to reassess in preparation for the long lines that form during his high-volume business periods. Among the changes he was considering, he said, was a requirement that customers wear a mask to enter the building.

That requirement would produce exactly what federal, state and local officials recommend.

In early April, as the accumulation of data revealed that asymptomatic people could transmit the coronavirus – and merely by speaking – the White House announced a significant change in messaging after the Trump administration’s initial advice against healthy people using masks.

The revised guidelines from the Centers for Disease Control and Prevention (CDC), introduced on April 3, recommend that people continue to maintain six feet of social distancing, but also wear a basic cloth face covering over their mouth and nose when social-distancing measures couldn’t be guaranteed, such as when shopping at stores.

The CDC considers that basic cloth coverings – as opposed to the surgical and medical-grade masks worn by health-care workers – are a broad community approach to prevent the wearer from inadvertently transmitting the disease to others in public places.

“What people don’t fully appreciate is that putting a mask on yourself is more to prevent you from transmitting to someone else,” said Dr. Anthony Fauci, a member of the White House Coronavirus Task Force, in April, immediately prior to the announcement of the CDC’s revised guidelines. “And if everybody does that, we’re each protecting each other.”

“Certainly if you cough or sneeze when wearing a mask, it will prevent the droplets from going any distance,” she said. “And that’s how it’s transmitted – from the droplets of the virus.”

Yet all the official mask-wearing guidelines are voluntary recommendations. That means individuals and businesses are responsible for how they practice COVID-19 spread prevention.

Large retailers such as Walmart and Lowe’s require all employees to wear masks, but not customers. Others, such as Menards and Costco, include a “no mask, no service” policy for customers.

That’s an approach advocated by Wallis and John Tinnon, owners of Gordon Lodge in Baileys Harbor. For them, it’s like the “no shirt, no shoes, no service” public-health policies some businesses adopt, but it’s far more necessary, given the seriousness of the coronavirus and its ability to hitchhike with the thousands of visitors who come to Door County.

“It is up to us as individuals to do the right thing and follow best practices,” Wallis Tinnon said by phone Monday from Chicago, where she and her husband have elected to remain until it’s safe to return to their Door County business and home.

Not everyone is convinced that masking works, however. Some of those people own local businesses, such as Gary Nelson, owner of Nelson Shopping Center in Fish Creek. He said Monday that he heard early on that cloth masks weren’t an effective barrier for the microscopic virus.

Ever since then, he has respected those who are making masks and his customers and employees who wear them, but he has embraced the voluntary nature of the guidelines by opting for a policy of “freedom,” he said. “If you want to wear a mask, you’re more than welcome. But you don’t have to wear one.”

Nelson said he witnesses a lot of improper mask-wearing, which renders the mask ineffective. This has also been the observation of Rob Scaturo, owner of Scaturo’s Baking Co. and Cafe in Sturgeon Bay.

“In our experience, the people wearing the masks are wearing them in a way that isn’t protecting anybody,” he said Monday.

By this Scaturo meant that either they take them off when they talk, let them fall down, or “it winds up making people touch their face more than when they’re not wearing it.”

Scaturo doesn’t require his employees or customers to wear face coverings because they interfere with communication. They rely instead on constant hand washing and safe social-distancing practices. He also said the recommendation to wear a mask is voluntary, and he’s not sure what kind of message that sends.

“If the government says you have to do it, we’re going to do it,” he said. “By not mandating it, maybe they’re saying it’s not that important.”

The White House has repeatedly said that requiring people to wear masks is something an authoritarian regime would do.

“Require by what?” Fauci said during the same April interview before the CDC recommendations on masks came out. “Penalty? Putting people in jail? That can be counterproductive. It could perhaps be OK in China, but here, it’s more important that people understand the importance of this.”
Locally, Powers explained that Door County Public Health is not a regulatory agency, so education rather than mandates is what the public and local business owners can expect from the department.

To that end, the Partnership for Infection Prevention – a collaboration between Door County Public Health and Door County Medical Center – issued guidelines this week “for local businesses that are serious about the safety of our visitors and residents.” One commitment that those guidelines ask both businesses and customers to make is to wear masks.

In the end, Powers stressed that face coverings are only one of the ways in which everyone can help prevent the spread of the disease.

“The first recommendation is to stay home,” she said. “Stay the course.”