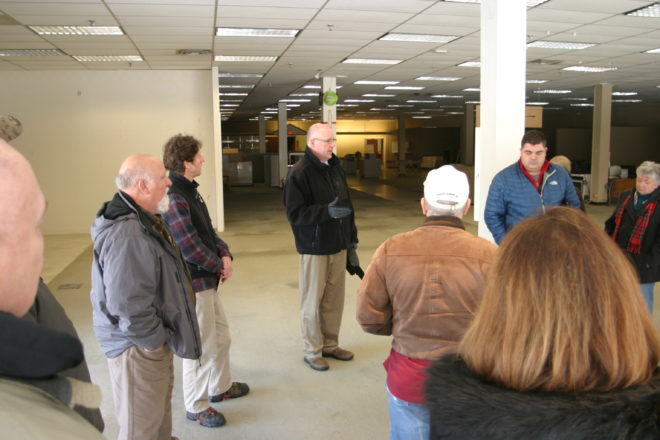 County Administrator Ken Pabich talks about the Younkers building before members of the county board take a tour of the 22,000-square-foot space in 2019. Photo by Jim Lundstrom.

Its location was attractive for the county because the 22,000-square-foot building is next door to the Door County Historical Museum, which is badly in need of archival space and parking, both of which could be accommodated by the purchase. The idea was to use the rear sections of the building for museum and county archives and storage, and the front space for a youth exchange or open-space concept for an incubator or maker space. But initial cost estimates to renovate the 62-year-old building put a damper on those plans, coming in between $5.1 and $6 million.

“That cost was a bit of a shock,” said Ken Pabich, Door County administrator. Even alternatives carried high price tags, “so the county paused,” Pabich said.

Last year, the county commissioned a campus-wide Master Plan to determine the highest and best use for the Younkers building, but also the Door County Historical Museum, a museum Archive Storage Facility, the Sturgeon Bay Library and the Miller Art Museum. That Master Plan was presented last week during a public meeting before the county’s Facilities and Parks committee.

“For the Younkers building, the key takeaway is there’s no specific need for county use except to retain the parking,” Pabich said.

The Master Plan option proposed for the Door County Historical Museum and Archive Storage Facility includes an expansion project for $4.6 million. For the Library and Miller Art Museum building constructed in 1975, five different options were presented from a renovation of the existing space that starts at $4.4 million, all the way up to the construction of a three-story addition out to Third Avenue with housing on the second and third floors for $22 million.

Nothing has been decided about any of the plans that were presented last week, and they’re waiting on a refined version of a space study to define the needs versus wants for the library and art museum spaces.That refinement should be done by the first quarter of this year.

Pabich said stakeholders had more consensus on the historical museum and archives space project, which could land on the county’s capital improvement plan in preparation for drawings and a more solid cost estimate. Decisions for any of the projects, including the fate of the former Younkers building, would have to wind through the public approval process before being decided.