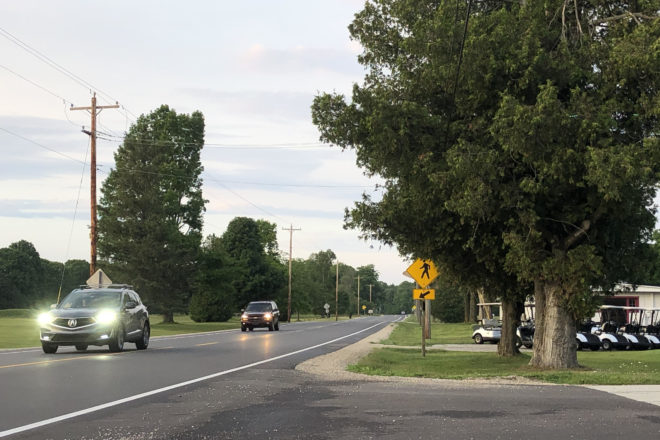 Two cars head south on Highway 57 past the Maxwelton Braes Golf Course crosswalk and the Maxwelton Braes resort driveway. A group of residents in the subdivision and condominiums next to the resort just south of residential Baileys Harbor are not giving up an effort to persuade the state to lower the speed limit and create a no-passing zone near the course and the County E intersection. Photo by Craig Sterrett.

Highway 57 through Maxwelton Braes Golf Course in Baileys Harbor becomes a straight, flat, half-mile stretch – and it meets the standards for a 55-mph zone and passing zone, according to the Wisconsin Department of Transportation (WDOT).

But Jim Musiel and fellow members of the Maxwelton Braes Condominium Owners Association aren’t giving up on trying to persuade the state to lower the Highway 57 speed limit or to create a no-passing zone. Musiel and WDOT officials have been invited to a Baileys Harbor Town Board meeting July 12 at 6 pm, and Musiel hopes he can persuade the WDOT at that time to reconsider its findings from a fall 2020 traffic study.

Brian Brock, northeast Wisconsin DOT systems planning and operations chief, said the July 12 meeting will give the WDOT a better chance to explain why that stretch of highway is safe for 55-mph speeds and the cautious passing of slow traffic.

Town officials this spring said the WDOT would, at most, allow the town to put up a flashing yellow light – at the town’s expense – near the Maxwelton Braes resort entrance and crosswalk between the golf course’s front nine and back nine. Musiel said he didn’t see how a flashing light would help anything – especially in a passing zone.

The WDOT study, conducted late last year, concluded that the section of highway in question met the criteria for a passing zone and a 55-mph speed limit, and it “seemed to imply there have not been enough accidents on this stretch of highway” to warrant changes, Musiel said. “They went by the book, but I told them they missed one thing: They missed common sense. The potential for what could happen there is pretty significant. There are so many close calls, but they don’t get recorded.”

Brock said the WDOT has provided responses to the town as well as to Musiel. The safety survey included a crash study, which found no reported accidents in 2019 or 2020, and five crashes from 2014 to 2018. Crash reports showed that weather conditions factored into some of those accidents, and Brock said that driver behavior, not the highway itself, caused most of those crashes.

Musiel previously requested that the WDOT lower the speed limit and restrict passing for an entire 3.5-mile stretch from the Town of Jacksonport to County E.

Brock said the study concluded that the existing signs and pavement markings met state and federal standards, and the no-passing zones were marked correctly throughout that stretch.

As part of the fall 2020 study, WDOT radar detectors discovered that, under normal traffic conditions, 75% of drivers were observing the 55-mph speed limit, Brock said.

“If we arbitrarily or artificially lowered it to 45, our compliance would be 30%,” the WDOT study concluded. Brock said that’s a concern: More drivers would drive well over the speed limit while others obeyed the limit, which creates dangers that go along with “speed variability.”

“We are always looking for effective speed limits,” Brock said.

Musiel noted that the state did not conduct its study during the height of the tourist season, when traffic was heaviest. And that’s true: Brock said the WDOT avoids doing traffic studies during congested times because in heavy traffic, drivers’ decisions and reactions – not roadway markings and speed limits – tend to have the most safety ramifications.

Musiel said he will continue to urge town officials to pressure the state to take three specific actions: create a no-passing zone along the golf course property, lower the speed limit from 55 mph to 45 mph, and rebuild the intersection where County E meets Highway 57.

“County E comes in at a 45-degree angle,” providing a poor view of traffic for County E motorists, Musiel said.

He said he speaks for himself, his Bonnie Brae Drive condominium complex neighbors, and homeowners in the subdivision northeast of the course.

Maxwelton Braes Golf Course owner Jim Bresnahan said he also has concerns about the traffic and supports the condominium association in its efforts.

“I think it’s a concern for everybody,” Bresnahan said. “If they won’t reduce the speed limit, at least eliminate the passing zone.”

Bresnahan can look out the clubhouse window and see cars flying by at much more than 55 mph, he said. He sees a lot of risky passing maneuvers, and he and his wife were almost struck near the crosswalk. Bresnahan said the northbound traffic must slow for a 30-mph zone less than a mile north of the course, so he doesn’t see why it’s so important for the state to keep the speed limit at 55 around the course and the County E intersection.

The Town of Baileys Harbor has not taken a position on the WDOT study or the condo owners’ concerns. The town received information on the study this winter but has not formally placed it on the agenda for discussion until now for the July 12 meeting.