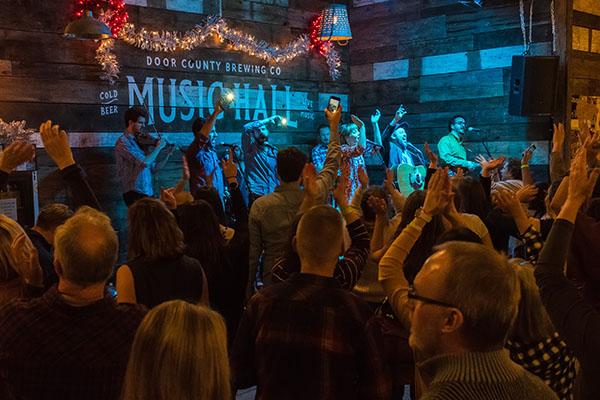 At Door County Brewing Co. Music Hall, they like to say that good music will make you dance. Photo by Len Villano.

It’s routine for a touring band to hit certain staple cities on a Midwest tour: Chicago, Milwaukee, Madison and the Twin Cities. Door County, on the other hand, isn’t a place you can just pass through: it’s a deliberate destination that requires added hours on the road just to reach the peninsula, let alone travel north of the county line.

Even acknowledging this potential distance problem, the McMahon family, owners of the Door County Brewing Co., committed to making music a prime focus when they opened their brewery on the site of a former feed mill in Baileys Harbor in 2013. They installed a small stage in the cozy space, and Ben McMahon — son of Angie and John, and brother of Danny — began recruiting bluegrass and brass bands from throughout the state and beyond to play in the space. 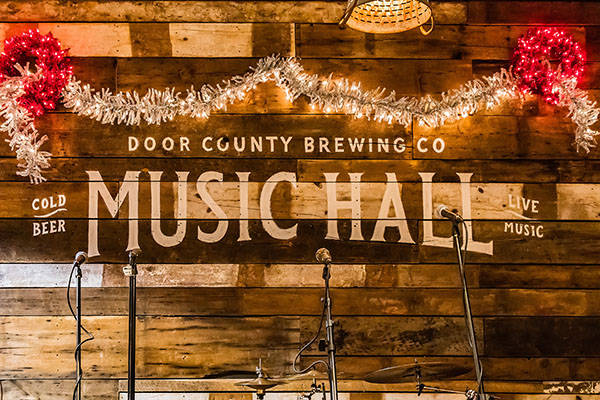 In 2017, the family decided the brewery and taproom needed more space — in part because they had big plans for bringing more and bigger sounds to Door County. Construction began on a new building in the center of town — approximately 500 yards away from the original space — that would immediately become a centerpiece of the peninsula’s music scene.

By July of 2017, the doors were open at a venue the likes of which the county had not seen before. The stage was bigger; the sound system was state-of-the-art; and the name was expanded to the Door County Brewing Co. Taproom and Music Hall, putting beer and music on an equal footing.

The new building has a style inspired in part by Angie’s home state of Texas, and in part by the barns that dot the Midwestern countryside: two moods that come together to give the hall a rustic energy all its own. The walls are clad in reclaimed barnwood salvaged from two barns in Luxemburg, just a little south of the Door County line. Thick, natural beams give the structure a broad-shouldered toughness, and behind the bar, taps emerge from the rough edges of bricks from an old building in Valmy, a neighboring community about 20 minutes from the taproom.

“We love Baileys Harbor,” said John McMahon upon the hall’s opening. “When you go in there, you will see this as our expression. This is who we are, and we’re just going to have a good time here forever.”

That expression comes through in worn edges, unfinished woodgrain and a tall, wide hall that shouts that all are welcome — especially to dance. The atmosphere moves in its own natural direction: an organic growth that arises from the effort the McMahons have put into booking bands of all genres: Americana and roots to hip-hop and heavy metal. A summer Friday evening might have a roadhouse feel, with cool lake air wafting in through open doors as an outlaw-country singer wails from the stage. A night later might feel more like a muggy, rustic club, with a crowd of beards and sundresses bobbing to a 10-piece brass band. 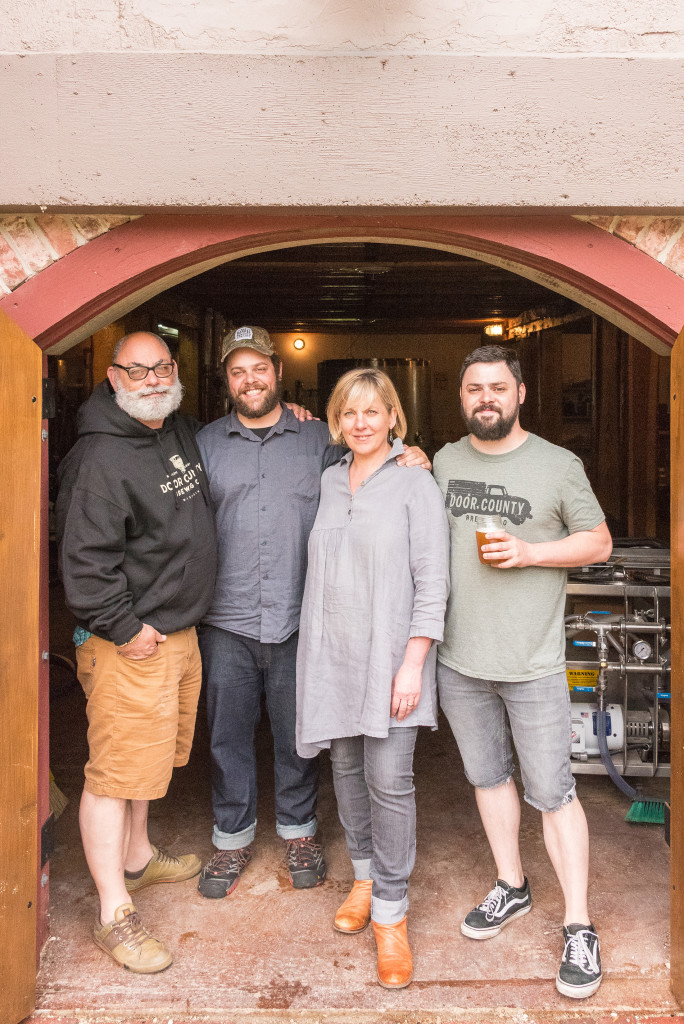 The McMahon’s at the original location of Door County Brewing Company in Baileys Harbor. From Left: John, Ben, Angie, and Danny McMahon. Photo by Len Villano.

As business roles within the McMahon family shifted, Angie took over the band-booking duties from Ben when he was tapped to hit the sales beat. She receives suggestions about musicians to consider and spends a lot of time working with bands and their management teams to overcome that Door County distance problem and lure them up here.

“One of my favorite things is discovering small, up-and-coming bands,” Angie said. “The first year we opened, we had Dead Horses play for next to nothing. Now we can’t touch them financially, which is a really cool thing.”

Whatever show she books — a sit-down-and-listen type or a get-up-and-dance type — she hopes it will offer lots of entertainment and energy.

“We like to see the taproom dancing,” Angie McMahon said.

In fact, “Good Beer Makes You Want to Dance” is one of the family’s mantras. There are nights when the crowd is happy to sit at the front tables and listen, but there are also nights when the staff pushes the tables aside so customers can dance all night.

Creating a thriving social scene and premier music venue is a lot of work, a learning process, and a game of risk. The McMahons haven’t been afraid to try new things or spend big on good bands. The result has been a quickly earned reputation for quality music and a good time. You don’t need to know the band’s name to count on a good experience — you count on the Music Hall to deliver.