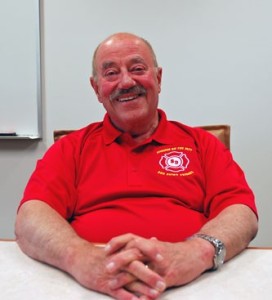 Steve McNeil wasted no time in explaining why he is retiring as administrator of the City of Sturgeon Bay at the end of this month.

“It’s time,” he said as we were about to get started on an interview in the city’s conference room. “Hold on. Let me get my phone and I’ll show you why.”

He goes to his office around the corner and returns with his phone, and pulls up a photo of his only grandson, Braden.

“Braden is due to have a brother. His mother is due on Aug. 21st,” McNeil said.

Then he pulls up another photo, this one taken a few weeks before at Camp Pendleton in Southern California when his oldest son, Steve, was promoted to the rank of major in the U.S. Marine Corps.

“We went out for his promotion ceremony. I was standing there with him and holding Braden and said, ‘You know what, I didn’t make the wrong decision.’ I don’t want to be the grandfather who sees him for three days at Thanksgiving every year,” McNeil said. “It’s time, and I’m 69 years old. I tell everyone, it’s time. I don’t know if I can explain it better than that. When you get there, you’ll know it. Clearly, I want to spend more time with my family.”

Having come to Wisconsin shortly after the turn of the century after having lived most of his life on the East Coast, and with a son in California and another in Moab, Utah, and his wife Ellen’s two sons and a granddaughter in New Jersey, the question has to be asked, where will you live in retirement?

“Here,” McNeil answered without hesitation. “We’re not leaving here. We love Sturgeon Bay. But now we can spend some time with the kids, and spend time with each other. We love traveling.”

Some of that traveling will be on motorcycles.

“We have four motorcycles,” he said. “We each have two. I hope to spend a lot of time on those.”

McNeil said the decision to remain in Sturgeon Bay was an easy one.

“I think Sturgeon Bay is an infectious place to live, I really do,” McNeil continued. “A unique thing is that the majority of people who live in Sturgeon Bay work in Sturgeon Bay. It probably doesn’t sound like much of a statement, until you think of the average American community. People commute. Here we are in this city and everybody stays here. I think that causes people to feel more of a sense of ownership than other places I’ve been. It’s a positive thing. When I’m out mowing my lawn and someone stops to talk to the city manager, they’re talking about good things. They’re not coming to complain about things.”

The other big question McNeil has been getting is will he be getting involved in city committees or seeking elective office?

“The answer is no,” he said. “Not right now. First of all, I want to step back and be Steve and I want to be Ellen’s husband and my kids’ parent. Now, maybe a year from now if I’m interested and the community’s interested, maybe I’ll get involved. But I’ll always be involved in the community. My wife and I belong to the Door County Maritime Museum. We volunteer at most of their events. We’ll continue to do that. We volunteer with the Sturgeon Bay Visitor Center. We’ll continue to do that.”

“Most of my life was spent in the construction business,” he said. “This was almost a second career. I sold the construction company and was asked. I became a manager of a village in Vermont, then came to Wisconsin (he served as administrator of the Village of Winneconne for five years before being hired by Sturgeon Bay in 2008). This has been about a 20-year journey for me. The opportunity came and I’ve enjoyed it ever since.”

“I can’t say enough about Steve McNeil,” said Sturgeon Bay Mayor Thad Birmingham. “I don’t know that there’s another Steve McNeil out there. I hope that people don’t expect Josh (Van Lieshout, the Village of Egg Harbor administrator who was hired on July 2 to replace McNeil) to be another Steve McNeil. I think that’s impossible.”

“I’m going to live here, so it’s important to me that the guy does a good job,” McNeil said about his replacement.

“I’m excited. I know Josh very well, very well,” McNeil continued. “And he’s a city resident. I know Josh well because he’s an administrator. I’ve worked with Josh. The added pluses are he lives in the city of Sturgeon Bay. He’s a part of the community. He’s involved in various organizations. He has children in the school system. That’s a huge plus. One of the reasons I can say I know Josh well, certainly the administrators in Door County work very closely together. That may not be seen from the outside. Maybe the perception is that we compete with each other, but please believe me, the absolute reverse is true.”

McNeil expects no great fanfare upon his departure, wants no plaques erected in his memory. He is just happy to see a bustling, vibrant downtown.

“Two weeks ago my wife called me on a Tuesday and said she had been downtown and couldn’t find a parking space on 3rd Avenue,” he said. “I’m thinking, whoa, that wasn’t the case seven years ago. The city’s come a long way and I think I’ve come along for the ride. I wouldn’t claim credit for that, but the joy has been watching it happen.

“My big reward is the people of the city, the people I work with. They just don’t get any better. One of the things I think a lot, the folks in Sturgeon Bay just don’t understand the quality of the people who work here and the commitment to the city. I can’t overstate that and I think I’m understating it by telling you that.”

He looks around at the empty chairs in the conference room.

“Every one of these seats has a face on it because this is where we meet. Seven years here, I’m the junior guy,” McNeil said. “Tim Herlache is retiring Jan. 1 after more than 30 years with the fire department. Arleigh Porter, 35 years with the police department. That speaks highly of Sturgeon Bay. I can tell you personally, most of them have been recruited by other municipalities, but they stay.”

McNeil said the decision to retire has made him think about his entire career and life.

“You look back where you’ve been, where you started, where you’re at,” he said. “I graduated from college in 1968. Less than a year later I was in Vietnam. I was a Marine Corps 2nd lieutenant. I spent 13 months over there. I think one of the things you learn quickly, you’re not going to come home based on your smarts, you’re going to come home based on the collective commitment of everyone. I think young 2nd lieutenants learn very quickly how humble and small they are in the big picture, and how important that group of people you’re with are. That group was obviously a good one because I came home. They will always have a special place for me, as you would expect. But what I find so fascinating is the group I’m ending with, the 10 department heads I’m working with here, are equal to or exceed the group I started with. So how fortunate am I to have started, a 22-year-old 2nd lieutenant with a bunch of 18- and 19-year-olds over there. We did what we had to do and most of us came home. And now I’m ending with a group of 10 department heads that I work with every day that are the best I’ve ever worked with. How does life get better than that? The start and the end, wow! Then you can retire with a smile on your face. What a talented group of people they are and how fortunate the city is to have. That’s why I’m staying.”