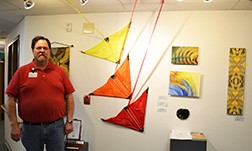 Scott Smith with one of his many kites at The Meadows Art Gallery in Scandia Village.

April is National Kite Month, a month-long celebration dedicated to celebrating one of the world’s greatest pastimes. In Door County, The Meadows Art Gallery in Sister Bay will honor the wonderful qualities of this universal activity with its newest exhibit, “The Kite Show.”

It has long been a tradition of Scandia Village to display kites every spring, thanks in part to the nearly lifelong hobby of Scott Smith, nutrition manager at the facility.

Smith has been collecting kites since he was a teenager. He and his family spent summers at their cottage on Europe Lake and it was in Fish Creek that he purchased his very first kite – a green, white and black checkered Nantucket delta kite.

Today, Smith still owns that kite, along with nearly 100 others.

“I enjoyed flying them and they were beautiful,” Smith said. “When we would come up to stay in the summertime, we’d stay at the lake and there in Gills Rock was a big open field and I would go over there and fly the kites. As time went by, I would get different kites – different box kites, different delta kites, things like that.”

When he first got into collecting and flying kites, Smith turned to catalogs, books and eventually joined a kite club to learn all about the aerial hobby. He started out with single line kites and as he experimented with kites of different size, he learned to master dual lines (also referred to as “stunt kites”) which are maneuvered using two lines, as well as arguably the most challenging kite to fly (and Smith’s favorite) – the quad line, which is maneuvered using two sets of lines.

“You can actually hover it across the ground, you can run it sideways, you can go up, you can go back, you can spin it at the top,” Smith said. “It’s hard to fly but it’s really fun once you master it.”

Within his collection are kites from across the globe – a 125-foot-long Dragon Kite from Hawaii, hand-painted silk kites from China, and Indian kites printed on tissue paper, which themselves add a whole new dimension to the sport of kite flying. 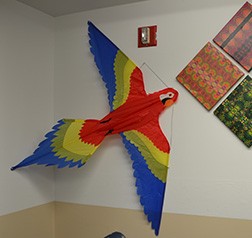 “You use lines with glass chips in them,” Smith explained. “They’re like dualing kites, so you try to cut the other person’s kite.”

Despite the dozens of kites in his possession, there are a few out there that Smith has always longed to own, namely kites used by various countries during the World Wars.

According to Gomberg Kite Productions International, during World War I, the British, French, Italian and Russian armies used man-lifting kites to observe their enemies and while much of this stopped when airplanes were introduced, the German Navy continued using man-lifting kite boxes to increase their viewing range of submarines on the surface.

During World War II, the United States Navy used kites to prevent airplanes from flying too low over targets, and pilots lost at sea could raise a box kite to be found by search crews. But the ones Smith most wants are ones that you might think a kite enthusiast would cringe at – military kites used for target practice.

“On the battleships, they would have these special kites that they would fly to help the soldiers learn how to shoot the guns on the ships,” Smith explained. “They would put the kites in the air and… the people on the ships would practice shooting at them with the big naval guns.”

Smith has been the dietary manager at Scandia for the past 15 years. It was about seven years ago when his mother, a resident at the facility, encouraged him to set up his kites for all the residents to see. Smith happily obliged, bringing dozens of beautiful kites to the walls and ceiling of Scandia.

“That first year, there were probably 50 or 60 kites all around,” Smith said. “They loved it. The bright colors, the signs, it was really exciting for people to see that.”

A few years later, Tom Seagard started The Meadows Art Gallery within Scandia Village. The residents loved the kites so much that Seagard began incorporating them into the art exhibit every April. Each year, Smith goes through his collection and picks out different kites to feature. Seagard then finds artists who use a rainbow of color in their artwork and matches those pieces of art to the kites.

For Smith, walking the halls of Scandia Village and seeing his kites matched up with artwork brings a whole new dimension to his collection. 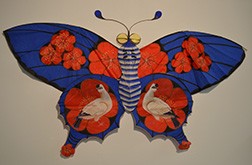 “I think it’s great that they started The Meadows Gallery,” Smith said. “It’s a nice way to get different things in for the residents to see and it’s a nice way for Door County artists to display their work.”

“I think the art and kites both benefit,” Seagard said of the exhibit. “I know that personally I have my head and heart de-winterized by the color.”