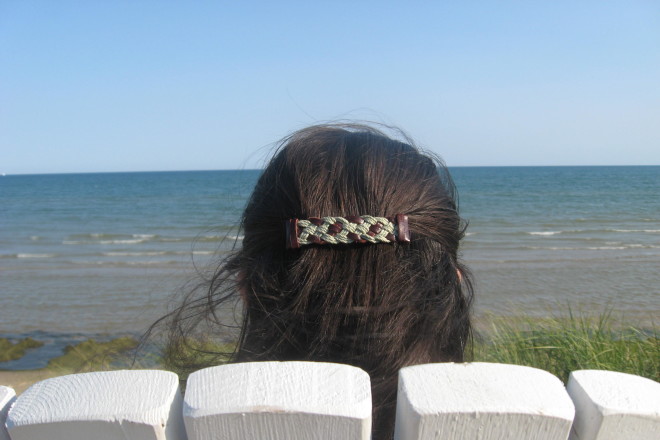 A number of authors have used the Door County peninsula as a setting for their fiction; among the earliest and best known to do so is LaVyrle Spencer in her 1990 romance Bitter Sweet. But more recently, murder mysteries have scattered their clues on the terrain.

Patricia Skalka’s Death Stalks Door County (2014) is the first in a series of traditionally gritty novels dealing with the investigations of fictional former detective-turned-park ranger Dave Cubiak, who came to Door County seeking refuge from his former life in Chicago but discovers crimes waiting to be solved in Northern Door just as he had in the Windy City. 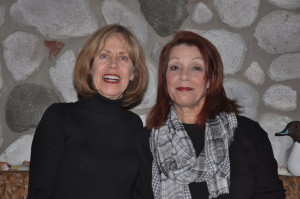 Co-writers Rosalind Burgess and Patricia Obermeier Neuman include in their Val & Kit Mystery Series their third book Death in Door County (2013). Val and Kit are good friends as well as amateur sleuths and bring a light-hearted, and at times comedic, approach to solving crimes, the murders tastefully executed in the style of a BBC crime series.

Elizabeth Rose offers yet another perspective on solving mysteries with her Murder in Death’s Door County (2012). Annie Malone quits her day job in Milwaukee to accept a ghost writing assignment in Northern Door. Her amateur attempts at crime solving put her in danger, but also bring romance. This cozy mystery avoids potentially offensive action in its pursuit of justice.

But murder in Door County? Visitors to the peninsula enjoy the friendly small-town atmosphere where strangers greet each other on the street, where the innocent optimism of the arts inspires, and where calendar-perfect scenery offers tranquility.

Isn’t murder out of place in such a setting?

That contrast is one of the reasons that Skalka chose the peninsula as the location for her series of Dave Cubiak mysteries, an environment that she knows well because she has had a rustic cottage on a Door County beach for 30 years. When she found herself gazing at bright blue sky and water during the day but clouds and darkness at night, she began thinking “about the contrast between light and dark, good and evil,” the possibility of “the veneer of natural beauty and positive atmosphere” of the peninsula opposed to “a sinister feeling beneath the surface.” She imagined old grudges and the need for revenge, events of the present linked to the past, a protagonist not from the area who would not know the back story and would have to ferret it out.

Neuman, too, finds the county “a good setting for a murder” because outwardly, the landscape is “bucolic, beautiful, with a sense of peace that juxtaposes murder.” And like Skalka, she has a cottage on the peninsula, and as a seasonal resident has a firsthand familiarity with the area.

While Neuman has spent her life living in the Midwest, her writing partner is from London and now lives in Houston, Texas. Burgess visits her co-writer in Door County and enjoys the contrast to a big city, as “everything is close by – so accessible. I love the relaxing atmosphere, the nice mixture of people.”

In an earlier novel, the writers had located the mother of their amateur sleuth Val in Door County. Burgess thought, “What a wonderful place for Val and Kit to take a road trip visiting her!” And what possibilities the people and places of northern Door can offer the imagination of crime writers.

Rose had initially planned to set her novel in the town Omro, near Oshkosh, where she was living at the time.

“But Omro didn’t click,” she said, and when she spent a weekend on the peninsula, “it all came together.” Her story seemed to take a life of its own and “almost wrote itself.” She stayed at a Door County inn very similar to the one in her novel, and took a ghost tour, inspiring the one in her story.

And as for a murder mystery in Door County? “Why not!” she laughed.

Because Neuman and Burgess are good friends and enjoy creating together the adventures of the amateur sleuth characters Val and Kit, readers might assume that the crime solvers are the alter egos of the writers. Without hesitation, Neuman asserts they are not, but rather “an amalgam of us,” she explained. “They are truly themselves by now,” she added, “and they do it [the writing] for us!”

Burgess agreed, pointing out “there is a little bit of both of us in Kit and Val.” While Kit “can be outrageous, neither of us would be.” And then she added, tongue in cheek, “But I’d like to be more assertive.”

On the other hand, Rose writes what she knows. She shares a number of autobiographical similarities with her Annie Malone character who was raised by grandparents in Milwaukee, attended Marquette University, and moonlighted as a ghostwriter – even having a bad telephone interview with a client. Annie’s new Door County friend Lizzie was based on Rose’s good friend and former college roommate.

Skalka has “always been a fan of mysteries” but spent her professional career writing nonfiction. She believes “a mystery should not only solve a crime but provide insight into human character, both the person who solves the crime and the perpetrator, not just what happened, but the reason why.”

While Death Stalks Door County is Skalka’s first Cubiak Door County mystery, it is not her last. The sequel Death at Gills Rock was published this June, and she has outlined future Cubiak novels set on the peninsula with recurring characters moving forward in time.

Skalka has shared her writing expertise with students at Write-On, Door County (she will offer more classes this summer) and her fiction at local readings (including the Maritime Museum in Gills Rock this July).

Unlike Skalka, Neuman and Burgess dispense with plot outlines, preferring instead to use the creative writing classroom technique of alternating chapters between the two. Neuman generally writes the first one and sends it to Burgess who edits and adds another chapter before sending it back, and so the novel progresses. As a division of labor, Burgess’s specialty is adding “sparkles” and Neuman’s, careful editing.

“We begin by trying to paint the other person in a corner,” Burgess laughed. Once the pair has finished moving passages about, revising, and editing, the chapters become seamless and belong to neither writer in particular, she said.

Their Door County murder mystery is the third in a series of four, all featuring Val and Kit and recurring characters, but the only one set on the peninsula. Number five, Palm Desert Killing, came out this June with the characters traveling to Palm Beach and number six is planned to be set in Burgess’ native England.

Like Skalka, Rose created an outline before writing this, her first novel. But like the other novelists, she envisions a series of Annie Malone cozy mysteries. The crime-solver Annie has taken up residence in Door County, but may return to Milwaukee for her next adventure.

The response of Door County readers to the three novels has been good, the authors report. Skalka laughed when she said that she doesn’t believe her fictional murders in Peninsula State Park will keep visitors away. Rose sees a cathartic value in mysteries, as after all, the reader doesn’t know the victim. And Burgess explained that she and Neuman enjoy “a lot of laughter, a lot of fun writing together,” a joy that they hope to pass along to their readers. 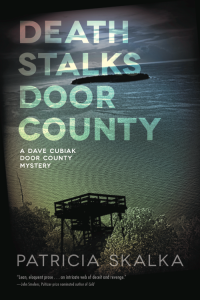 Patricia Skalka’s Death Stalks Door County, a Dave Cubiak Door County Mystery, brings the genre to a setting that has been anything but threatening to visitors and residents alike.

The fictional character Cubiak, a former Chicago homicide detective whose grief and guilt after the deaths of his wife and daughter at the hands of a drunk driver have made him unfit for work with the department, has moved to Door County to work as ranger in Peninsula State Park hoping to get his life back on track. But when tourist recreation in the area is threatened by a series of gruesome murders, all occurring in or near the park, Cubiak finds himself back in his role of law enforcement, an outsider dealing with the local establishment as he ultimately gets to the bottom of the crimes.

Cubiak is a classic detective, a loner dealing with the burden of his past while bumping heads with those in charge, discovering dark secrets, and respecting a higher moral order.

The author admits that she has taken liberties with the reality of Door County, but readers who know the area will enjoy familiar landscape and speculating as to the possible identities of businesses whose names have been changed. In addition they will be intrigued by the glimpses of a fictional under-belly of year-round life in Door County, and just maybe, glance over their shoulders from time to time when they explore Peninsula State Park. 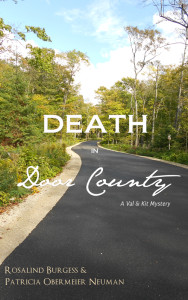 Death in Door County is the third in a series of Val and Kit mystery novels written by Rosalind Burgess and Patricia Obermeier Neuman, the first to be set on the Door County peninsula.

When Val visits her mother Jean in Door County on Mother’s Day, the occasion becomes more than a celebration of mother-daughter relationships. On the drive from Downer’s Grove, Val brings not only her adult daughter Emily but her best friend and co-sleuth Val.

The first victim is a mother whose daughter, because of their troubled relationship, becomes a suspect in the case. Val has troubles with her own mother as well, and is concerned about the problems her daughter is experiencing. Mother’s Day becomes considerably less than a happy occasion.

Despite the discovery of a second victim and a considerable range of suspects, the narrative is written with a light touch. The zany personality of Kit brings comic relief to the tragedies, as she and Val, with less than professional expertise, resolve the mysteries, dealing with colorfully amusing characters.

Readers who know Door County will enjoy the familiar terrain; fans of romances will be entertained by the sorting out of relationships; and mystery readers will be satisfied by the answers to the questions of whodunit, solutions that ultimately reveal hidden motives. 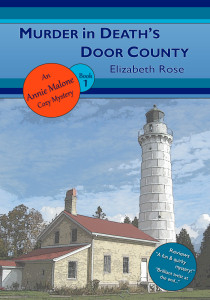 Elizabeth Rose’s novel Murder in Death’s Door County is an Annie Malone cozy mystery, one in which crime invades the Door peninsula leaving murder in its wake. Young Annie Malone has a mind-numbing business day job in Milwaukee but freelances as a ghostwriter for a vanity press. When the opportunity arises for her to accept a large stipend that allows her to relocate to Door County and ghostwrite the autobiography of an alleged crime figure, she resigns her position and travels to Egg Harbor to begin her work.

But something about the assignment doesn’t make sense to her, especially when she has a unsettling telephone interview with her eccentric reclusive subject. However, she is distracted from the project as she quickly makes new friends among the local population and meets a guy who reciprocates her interest in him.

Then disturbing events occur: she discovers a body in the inn where she is staying, finds mysterious evidence, and realizes that she has become the target of criminals.

Her adventures take her to different settings in Northern Door as she decides to take on the mystery with the help of her new friend Lizzie. Events are not always what they seem, and people are not always who they appear to be.

But this is a cozy mystery that gently disturbs the universe, and Annie Malone triumphs.