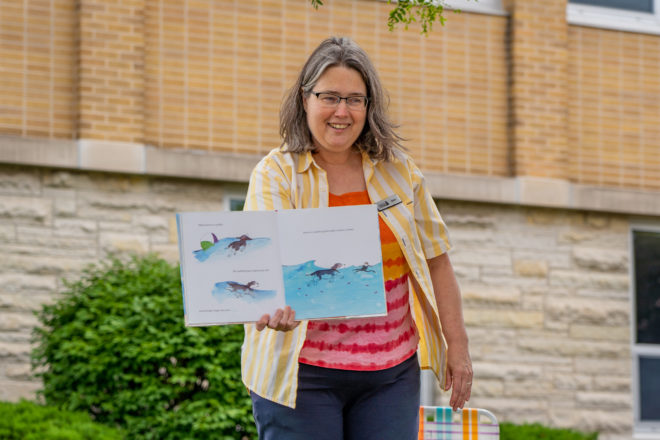 Beth Lokken during a storytime in Sturgeon Bay. Photo by Rachel Lukas.

To say that Beth Lokken is passionate about her work as the youth services librarian for the Door County Library is an understatement. Every decision she makes and every program she develops is done with the kids and teens she serves at the forefront of her mind.

In Door County, she’s been known to many for more than 20 years as, simply, Miss Beth, but her library-services career began in Fort Lauderdale, Florida, where she worked mostly with teens. She spent her time there learning the ins and outs of library operations and how she would want to lead her own department.

A search for library jobs led to a posting by the Sturgeon Bay library branch, and in January 1999, Lokken and her husband moved back to their home state.

The job posting was for a children’s librarian, but with Lokken working with young kids as well as teens, she updated the position to encompass that wider age range, changed the title to youth services librarian and adapted her programming to match. As the head of a one-person department, Lokken could make those changes.

She wants kids to love reading, and she helps to foster that love by getting materials into their hands.

“I think kids should own their own books,” she said. “I think that kids should have access to books that they love.”

And if young people are going to have access to books they love, Lokken believes she needs to learn their preferences. That means that instead of curating a list of books “all” kids “should” read, she takes the time to talk with them to find out what they like and picks out titles that match their interests. During her 23 years with the Door County Library, that adds up to a lot of books that Lokken has personally put in the hands of the community’s youth.

Even before getting books to kids, however, she works with the youngest library patrons through programs such as story time – a program she’s been leading at the Sturgeon Bay branch since she started it the first month she arrived at the library.

On the outside, story time may look like an adult reading to children, but that’s not in any way how Lokken sees it.

“Interacting with another human being, using words – for infants – builds brain capacity,” Lokken said. “So the little neurons, they’re touching each other, they’re building, they’re growing, and they’re getting stronger, and that is human-to-human interaction. Using books to do that increases the vocabulary, gives an additional thing.”

Lokken also helps parents to make the most of their at-home story-time experiences by offering tips about how to read aloud to children. She encourages a high level of interaction with the children and the book, conversations about the images and giving kids the time and freedom to respond to the story and point things out.

Lokken has been in her position long enough to have watched some of these children grow into adults, and some are now parents themselves who take their own children to Lokken’s story time.

“I love this, I love these people, I love doing this job, and I will do this job happily until the day that I retire,” she said.