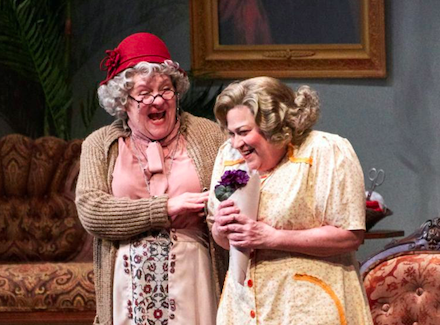 (From left) Penny Slusher as Miss Marple and Cindy Gold as Bunny in Peninsula Players’ “A Murder Is Announced.” Photo by Len Villano.

The latest play to grace the Peninsula Players’ stage is the murder mystery A Murder is Announced, based on the novel by the great English writer Agatha Christie. Well known for her 66 detective novels involving Hercule Poirot, Miss Marple, Tommy and Tuppence Beresford, and more, Christie has long been a treasured literary name. Unfortunately, though, I have not had the circumstance to read or watch anything Christie before seeing this adaptation. Despite a lack of familiarity with the characters or Christie’s storytelling style, I enjoyed and was greatly entertained by my first encounter with the brilliant Miss Marple.

The play’s action springs from a strange advert placed in the local newspaper in the small village of Chipping Cleghorn. It reads, “A murder is announced and will take place on Friday, October 29th, at Little Paddocks, at 6:30 pm. Friends accept this, the only intimation.”

The village is abuzz, especially at Little Paddocks: a lavish, Victorian home owned by Leticia Blacklock. This home, the production’s sole setting, hosts several boarders, including Blacklock’s niece and nephew, Julia and Patrick; a young, widowed mother named Phillipa; and Blacklock’s old friend Dora “Bunny” Bunner. Tending to the whole clan is a boisterous, Hungarian housekeeper, Mitzi. Additional faces join the household group, creating a cast of confounding characters – and more suspects – who will keep you guessing until the very end.

Penny Slusher plays Miss Marple as both endearing and steadfast in her inquiry into the crime. During one moment of Miss Marple’s overt curiosity, Inspector Craddock, played by Lee Palmer, asks her sarcastically, “Do you want my job?” She responds, “Well, yes! But I am too short to be a policeman.”

Miss Marple was not a lead character, but she did play a key part in unraveling the plentiful plot twists. With her mild demeanor and grandmother-like likability, I understand why there are so many fans of Agatha Christie’s iconic female detective.

Other standout performances included Christie Coran as Mitzi, whose flair for the dramatic keeps you fixed on every humorous word. By far the loudest personality, she delivers convincingly with her lines and body language. Cindy Gold, donning bunny slippers as Dora Bunner, was memorable as Blacklock’s charming, yet dim-witted childhood friend. Her infectious chuckle and childlike reactions lent their own form of humor.

A Murder is Announced was first published in 1950; Leslie Darbon translated it for the stage in 1977; and this is the first time when Miss Marple has been introduced to Peninsula Players audiences. The translation from book to stage must have been an undertaking because the plot involves a lot of information to relay through characters. This isn’t the sort of play that allows you to sit unthinking – you need to pay attention to follow the leads and discoveries. You’ll find yourself second-guessing your initial opinions and suspicions as the second half begins and layers of the plot reveal themselves.

A Murder is Announced, directed by Joe Foust, will run through July 28, Tuesday through Saturday, 8 pm; and Sunday, 7:30 pm (except 4 pm on the final day, July 28). To learn more and purchase tickets, visit peninsulaplayers.com.