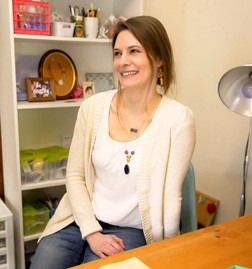 Jeweler Melissa Clark’s home studio showcases her artistic journey: a painting she created while attending Sturgeon Bay High School rests against one wall and a wooden architectural model she pieced together while attending Cornell University sits on the floor. “One professor called [the model] ‘sassy’,” laughs Clark. “I can’t get rid of that.”

The corner features her workspace, a table strewn with pieces of her current project: vintage photographs of flowers coated in a bubble of resin, almost ready to be clasped to a chain. With NPR or Downton Abbey playing in the background, Clark creates her Prettywar jewelry, featuring one-of-a-kind pieces crafted with vintage and upcycled items: old beads, antique pendants, rhinestones coated with colorful nail polish, even vintage Door County postcards.

“Prettywar. I know it’s a weird name,” she smiles. “It’s from a Wilco song, ‘She’s a Jar.’ I like word soup, word combos that make you think, ‘What are these words doing with each other?’ And those words seem weird together, but then I sort of thought that it was lovely because it’s like contradicting and complicating, they are a source of beauty.”

She pauses and laughs before adding, “Once in awhile people will look at me like I’m a degenerate. Usually people don’t think twice.” 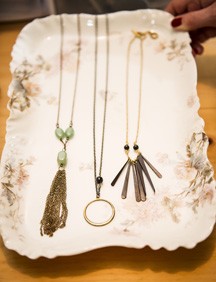 All of Clark’s jewelry is one-of-a-kind. Photo by Len Villano.

The name can be interpreted in any number of ways, but the jewelry speaks for itself. Her work is varied and fresh, simple and complex, inspired by “art and fashion,” she says. “I’ll get a color palette from a painting, for example. Also I think that studying architecture influenced my design – it teaches you how to see things and how to communicate ideas visually.”

Clark’s accidental foray into jewelry, influenced by all her artistic endeavors, first began with an art class at Sturgeon Bay High School. “I was kind of nervous about taking art class because you always think you’re not going to be as good as everyone else,” recalls Clark. “And then I took it.”

She put a portfolio together and applied for architecture school at Cornell University, an Ivy League school in Ithaca, New York. “So I went to architecture school for a year and then I got mono and I got really sick,” says Clark, who was diagnosed with chronic fatigue syndrome. “I sleep a lot.”

She then switched to an English major. “I couldn’t stay up for days at a time making models anymore.” 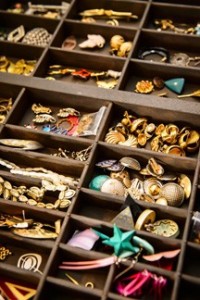 Clark often begins creating an original piece of jewelry by picking and choosing from her vast collection of vintage and broken jewelry. Photo by Len Villano.

Clark graduated with an English major, which also influences her jewelry making. “I’m always thinking about characters and narratives when I’m making pieces,” she says. “I think about the woman who is wearing something and what her story is and using vintage things that have a history of their own enhances that, or imbues, if you will. I do sometimes think of it as showing versus telling. I feel like sometimes it’s easier to show a story or idea and sometimes it’s easier to tell it, which is why I make iffy sketches with lots of words on them until I find a way to visually convey that idea.”

Showcasing and selling her work began in 2011 when she started crafting accessories – primarily leather and paper flowers – as a hobby and artistic outlet, which friend and fellow artist Kelly Avenson displayed when she opened Greco Gallery in downtown Sturgeon Bay.

“I owe a lot to Kelly. I made a lot of accessories, they were not that great, but she encouraged me to put them in her gallery. She let me do commission, which was awesome,” says Clark, who checked out books from the library, subscribed to Martha Stewart Living, and taught herself to make intricate jewelry.

“I like assemblages. I like mixed-media stuff,” says Clark who sometimes incorporates doilies or magazine fashion ads into her work. One of her favorite finds: “bags of broken things –that’s the best. It’s like they are all ready,” she laughs. 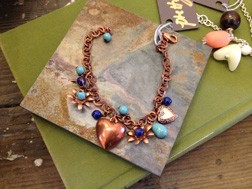 Clark displays and sells her work at Greco Gallery in Sturgeon Bay. Photo by Sally Slattery.

Now Clark displays her jewelry line in Greco Gallery. “I finally feel like I’m starting to make it more of a business,” said Clark, who is pleased to offer affordable jewelry to customers.

Looking ahead, she hopes to showcase her jewelry in boutiques one day. “That would be awesome. And I want to get my Etsy store up and running. I recently checked out Starting an Etsy Business for Dummies,” she laughs.

For now, she continues to explore her new craft, her varied and everchanging artistic journey.