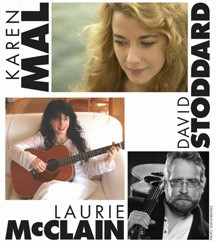 Third Avenue Playhouse will have music on the main stage on April 12 at 2 pm with Karen Mal, David Stoddard and Laurie McClain in concert.

From raw sensuality to shimmering bell-like clarity, Mal’s voice is both tender and powerful, and as effortless as a waterfall. There’s a river that flows between Mal and her audience.

McClain is a singer/songwriter based out of Nashville, Tennessee. She tours nationally on the folk/Americana concert circuit, and occasionally tours internationally. Her original heartfelt songs are messages of hope to a weary world.

Noted lyricist and composer Stoddard is a songwriter and teacher living in the snowy wilds of western Minnesota. He tours sporadically throughout North America and plays mostly concert venues, living rooms, and other dedicated listening environments.