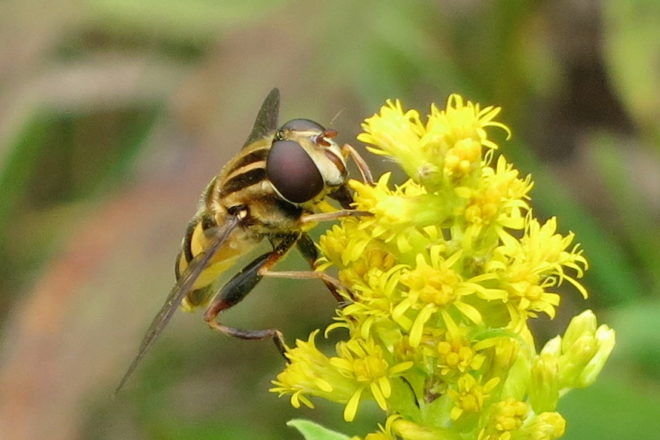 Courtesy of Wild Ones, Door Peninsula.

by Dale Goodner of Wild Ones, Door Peninsula

As I look across my lawn here in July, dandelions are pretty much invisible. That distinctive green foliage blends in perfectly with the grasses, clovers and dozens of other mostly broadleaf species. Dandelions are abundant, but in midsummer, nobody cares.

Back in May, their yellow flowers were plentiful and on display, prompting poison pushers to promote their products to solve this “problem.” But once applied, chemical toxins don’t know when to quit. They contaminate the watershed and do damage downstream.

According to Beth Huxta in “The Dark Side of Lawns,” lawn chemicals get tracked indoors, often onto surfaces where kids play. The National Academy of Sciences reports that 50 percent of contact with pesticides occurs within the first five years of life. Such repeated contact has been linked to numerous diseases in children. For example, researchers reporting in the Journal of the National Cancer Institute found that “exposure to garden pesticides can increase the risk of childhood leukemia almost sevenfold.”

Back in March, a promotional flyer from a lawn-chemical-application company appeared in my mailbox. It said the company could make mine “the best lawn on the block” using the drug Weed and Feed to deal with those stubborn flowers: dandelions. What the flyer didn’t mention is that a major component of the infamous Vietnam-era defoliant, Agent Orange, known as 2,4-D, is the “weed” part. The “feed” part is fertilizer that is unnecessary for a diverse mix of plants.

The company offered to eliminate dandelions along with anything else that isn’t grass. I used the enclosed envelope to send a note saying that I’m not about to downgrade my healthy yard into a foolishly flawed and fake ecosystem. Furthermore, the company failed to convince me that the much-maligned medicinal health food called dandelion is a problem that’s serious enough to risk my health or that of kids, pets, neighbors and wildlife.

The U.S. has more land in lawn than in corn by 32 million acres. Ten thousand gallons is the amount of water beyond rain that the average American lawn sucks up annually. Each year, some 90 million pounds of herbicides and pesticides are dumped on lawns by 80 million American households. American homeowners use up to 10 times more pesticides per acre of lawn than farmers use per acre of crops. Unnecessary lawn fertilizers are applied annually and quickly run off, entering water sheds. From there they often head south, ultimately contributing to a dead zone the size of Connecticut in the Gulf of Mexico.

Of the 30 most commonly used lawn pesticides, 16 pose serious hazards to birds; 24 are toxic to fish and aquatic organisms; and 11 have adverse effects on bees. Yet promoters go to great lengths to convince potential customers to buy these products to effortlessly create smooth, barren grass monocultures. (For more information, Google “dark side of lawns.”)

An FYI to the pesticide pushers: I already have “the best lawn on the block.” As I write this, I’m looking at a complex community that is our lawn. The majority of our flowers, shrubs and trees are native. Healthy cottontails visit as I’m working at my computer on the patio table. Numerous varieties of birds are a constant presence. Countless insects and spiders consider our yard theirs, and it is theirs. We are just temporary visitors who try our best to do no harm. We truly feel at home here as part of this amazing community of life that is greater by far – and older – than ours.

For a healthy and safe home environment, avoid “lawn treatments,” and don’t worry about dandelions. Their tap roots bring nutrients from deep in the soil, making the nutrients available. Their wide-spreading roots loosen and aerate soil and help to reduce erosion.

Broadleaf plants in lawns are a barometer of environmental quality. For example, when our son and daughter were young, we often took them to parks, zoos, botanical gardens and nature centers. If we didn’t see dandelions and clover, there was a very good chance that the broadleaf herbicide 2,4-D was being sprayed over the lawn to promote a grass monoculture. Rather than subject our kids to the unnecessary risk of exposure to toxins, we simply went elsewhere.

Dandelions represent both the “wild” and the “tame.” Even though they have long been propagated in gardens, they also thrive in the wild. “Wild” comes from “willed.” They grow pretty much wherever there’s space, and they’re very good at growing in sparse conditions. Seeds are often blown as far as five miles from their origin, so don’t blame your neighbors for your dandelions! This familiar garden plant is now found around the globe.

We humans are clever enough to invent poisons to kill broadleaf plants but not wise enough to know that unnecessary toxin use will cause extensive and unpredictable collateral damage downwind, downstream and throughout the food chain. As Pogo pointed out, “We have met the enemy, and he is us.”

Or, as Henry David Thoreau wisely said, “What are we to think of the doctor whose cures are worse than the ills he treats?”