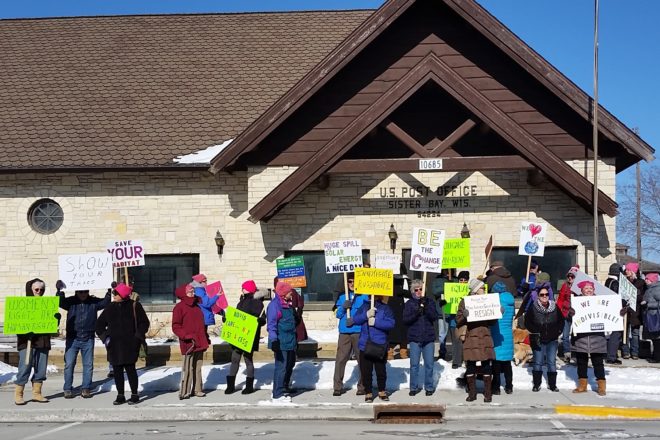 On March 15, more than 40 local members of Indivisible met in Sister Bay and peacefully marched to the Post Office. Close to 650 postcards were mailed to the White House expressing concerns about the proposed repeal and replacement of the Affordable Care Act, cuts to the EPA, alleged Russian entanglements in the election, the immigration ban, unethical businesses and political relationships and more.

“We have been calling our representatives, sending them emails and writing Letters to the Editor,” said Karon Winzenz, one of the participants, “and we felt it was time we sent a direct message to the White House.”

Carrying signs that read “Women’s Rights are Human Rights” and “Show us your Taxes” as well as other statements, the group chanted “This is what Democracy looks like” and other positive slogans. They were greeted by passing cars with honks of support and encouragement. “It is an energizing experience to be with others who share your concerns and to express them peacefully and collectively,” said Judy Brodd one of the organizers of the event.