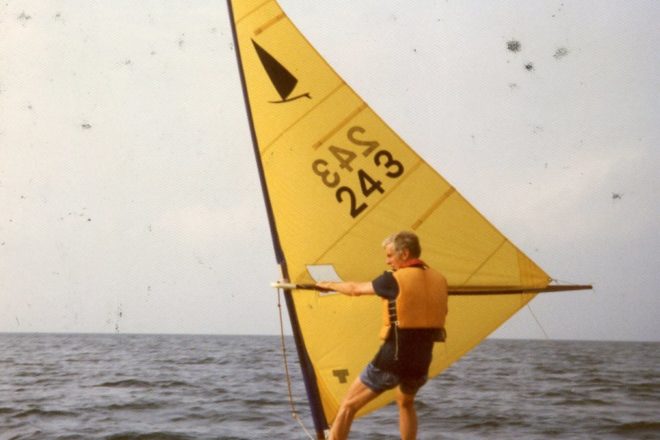 Perhaps you saw the obituary last week. Bob Davis, 92, died Nov. 30 in his Ephraim home with his wife of 66½ years Nancy by his side.

Despite the fact that Bob and Nancy were named Door County Philanthropists of the Year in 2015, you won’t find their names emblazoned on things.

Bob Davis did things quietly. He worked behind the scenes, pulling strings to make things happen. It appears he was a natural mover and shaker.

“My dad’s mode of operation was not to join any boards up here. He had done enough of that in his professional life,” said Rob Davis, the firstborn of five Davis children. “But he was in the background everywhere with advice and help and fundraising for projects. I wish I knew how much money he raised. It was just amazing.”

Others can confirm his uncanny fundraising ability, especially when tight deadlines were imposed.

“Bob was a wonderful, wonderful guy, a great friend, and when he got behind something, it happened,” said Tim Stone, who recalls when a deadline was imposed on the final amount needed to buy 16 acres to establish Grand View Park in Ellison Bay.

Rob Davis said his father’s love for Door County is a family affair that began more than 100 years ago with his great-grandfather, Robert Davis, a Chicago-based passenger officer for the Goodrich Steamship Co. 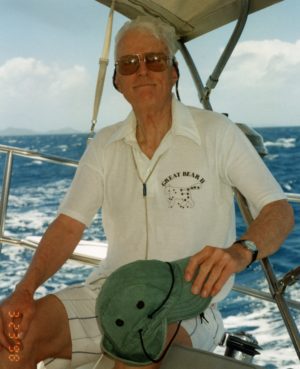 “Door County was one of the stops and he just fell in love with Ephraim and started bringing his family here,” Rob said, adding that the first record of Robert Davis I in the county is his name in the Anderson Hotel register in 1906, but adds that he was certainly here earlier than that “because there is a picture of my grandpa (Warren Davis) at about 3 or 4 standing in front of a log cabin where the Anderson Hotel now sits.”

His grandfather Warren continued the family tradition of summering in Ephraim when he built a cottage there at the age of 28. “My dad was 4,” he said. Warren Davis is one of the founders of the Ephraim Yacht Club.

In 1965 Bob and Nancy Davis built a cottage in Ephraim, and eventually began spending summers here rather than in Lake Bluff, Ill.

“I was 12 when they built the cottage,” Rob said. “During high school years, I was here all summer and involved in the yacht club. I taught sailing for a couple summers. It’s probably the best part of my growing up, here, not Lake Bluff. We called this home. We all really considered this home here.”

In the late 1980s, Bob and Nancy bought a former farm at the corner of Norway and Settlement in Ephraim and moved there full-time sometime in the mid-1990s. Both Bob and Nancy were named individually as chieftains during the annual Ephraim Fyr Bal, and they served as honorary co-chairs of The Ridges fundraising campaign.

Three years ago, Rob retired and bought the home next to his parents.

“I was jealous of my parents for 20 years, of the life they had up here. I moved up and never looked back,” he said. “My biggest problem in the first year, going around the county, people would come up and ask about mom and dad and say, tell them I say hello, and I didn’t have a clue who they are. They all knew who I am. It was everywhere. It’s a nice problem to have.”

Rob said although his father did not want to get involved in the board functions of organizations, he was still deeply involved in the Ephraim Yacht Club, the Door County Land Trust, Ephraim Historical Foundation and The Ridges Sanctuary.

“He did it all pretty quietly,” he said, recalling when his father set his sights on raising money to buy the Anderson Pond. There was a deadline to raise a quarter-million dollars.

“We all have fond memories of Anderson Pond,” Rob said. “He and I had a similar memory of skating on that pond. For me it was on New Year’s Eve. It just happened to be an idyllic night. We built a bonfire in the middle of the ice and skated. Besides being ecologically important, for years he talked to the Anderson family, are you ready to sell? It was always on his to-do list, and finally the Anderson family relented. He just wouldn’t relent. He made a significant contribution himself, but I called him Dialing for Dollars Davis.”

“When he was trying to get the Anderson Pond going, if the phone rang and it was Bob, you kind of ran the other way,” said George Carey, joking about his friend’s persistence once he had set his mind to a task. “He raised the money for Anderson Pond in five days or something like that.”

“But that’s exactly what his father did,” adds George’s wife, Linda. “In 1948 when they were going to tear down the Pioneer Schoolhouse, Helen Sohns couldn’t stand the thought of that and went to Bob’s father and said can you help me raise some money so we can buy this and we can think of what to do with it later? Sure, says Warren. So they did. They bought it and didn’t know what to do with it right away. It became one of our museums later.” 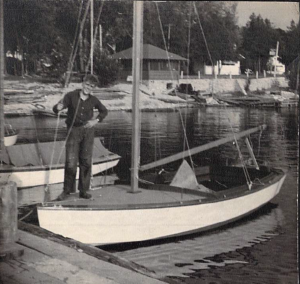 Bob Davis at the Ephraim Yacht Club in 1939. Submitted.

The Careys are the authors of Celebrating One Hundred Years: The Ephraim Yacht Club. Sailing and the yacht club were passions of Bob Davis, so he became a fact-checking source for the Careys.

“His recall was amazing,” Linda said. “I called him several times a week while we were going through all the archives of the yacht club we could put our hands on, and he would confirm things for us.”

George said while they were doing the yacht club research, they learned just how much Bob Davis was quietly involved in things.

“He never blew his own horn,” Linda added. “The thing I remember about Bob, he was always warm. Not the kind who exuded it, but you knew it was there. So if you had any sort of problem, you could ask him about it. [Tears begin to flow.] I’m going to miss him so much. It’s hard when it’s somebody you’ve known since you were born.”

She mentions that she liked to tease the Davises about their birthdays.

“They were both born on the first of the month,” she said. “I always thought it was hilarious that Nancy was born on All Saints Day [Nov. 1] and Bob was born on April Fool’s Day.”

“He loved to tease people or be teased,” Rob added. “He loved the give and take. His humor was pretty amazing. He loved word play and puns. He was great at it. He always corrected people on grammar. He was a publisher. So was his father.”

Rob mentions that one of his father’s legacies is a winter hike and pub crawl series through The Clearing.

“It spawned a lot of hiking groups among people who had been participants in his classes,” said Rob, who is now leading his own hikes.

Rob said while he lived the Door County life vicariously through his parents before he retired and moved here himself, in the last years of his life and the onset of Parkinson’s disease and macular degeneration, Bob Davis lived the outdoor Door County experiences through his son, who would describe his experiences to his appreciative father. The rugged natural beauty that attracted him to the county could now be accessed only through memory and his son’s experiences, which must have been a huge burden to a man who sailed alone on his sailboat into his 80s.

“As his disease progressed, he never complained,” Rob said. “He said, ‘How could I? I’ve lived such a blessed life’.”