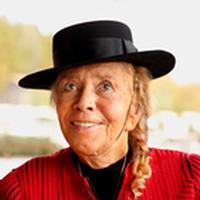 On Aug. 1, 2016, the Door County art community lost one of its most vibrant, optimistic and colorful artists with the death of Ellen Kate Sprogø-Topelmann, of the Hanseatic Art Gallery.

Born in Hamburg, Germany, on April 29, 1926, with a childhood growing up in WWII, it was hope for a better future that led Ellen to America in 1953. It was while living and working in Chicago (she worked as a waitress and then as an animator for Lewis and Martin Films) that she met Karsten Topelmann, whom she married in 1959. The couple had three children: Tanja (deceased), Lars and Lisa, between 1961 and 1965.

In 1969, Ellen and Karsten were introduced to Door County. After spending many summer holidays on the peninsula and dreaming of opening an art gallery, they moved from Chicago to Ephraim in 1970. Two years later, they opened the Hanseatic Art Gallery (named for Ellen’s hometown of Hamburg, located in the Hanseatic Trading League in Medieval Europe) where Ellen displayed her charming acrylic paintings of picturesque villages in Door County and Europe, vibrant florals, and olden-day scenes of children and families in good cheer.

Virginia Maher, archivist with the Peninsula School of Art, first met Ellen at the Hanseatic Art Gallery four decades ago and recalls a woman who was “as gracious and charming then as she was the last time I saw her earlier this year.” Ellen’s profile will appear in Maher’s upcoming art book, Selected Artists of Door County.

Some of those paintings have graced the covers of magazines and books, including Paul and Frances Burton’s Ephraim Stories and Door County Stories.

While her art captured the eye of the gallery’s visitors, it was her warmth and interest in their lives that captured their hearts. She was known for remembering her customers’ life stories and the pieces they bought, and was particularly interested in hearing the love stories of the couples who came in.

As Door County native Melissa Ripp recalls, Ellen both painted and lived from a place of deep optimism, love and happiness. Ripp was an impressionable eight-year-old visiting her grandmother on Spruce Lane in Ephraim when she met Ellen, and maintained a relationship with her and Karsten as she began working for The Hardy Gallery.

“Ellen was just one of the most warm, interesting people I probably had met as a young girl,” Ripp said. “She had these headbands and she always had her hair in these long, blonde braids and I just always remember thinking how cool of a woman she was. She was always so delighted to see you … she was so happy to see you and so wanting to share her stories.”

During the off-season, Ellen and her husband traveled the world with canvases and paints in hand, and had a special fondness for the Canary Islands and Rothenburg ob der Tauber, Germany. But her heart remained in Ephraim, the “pearl of the peninsula.”

What remains today is a generous spirit that will live on in her artwork and the memories of family, friends and gallery visitors.

A family ceremony will be held at a later date. In a tribute to Ellen’s warmth and love of friends and community, the family requests that instead of flowers or donations, “friends simply let memories of Ellen warm their hearts and to not cry because she is gone, but to smile because she was here.”