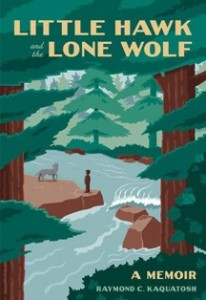 Ninety-year-old Raymond Kaquatosh was born in 1924 on Wisconsin’s Menominee Reservation. In his Wisconsin Historical Society Press memoir Little Hawk and the Lone Wolf, Kaquatosh tells the stories of his reservation boyhood, Indian boarding school days, and military service and shares how the lessons he learned from a wolf he had befriended as a boy guided him along the way.

Kaquatosh, also known as “Little Hawk,” was the son of a medicine woman. He spent a Depression-era boyhood immersed in the beauty of the natural world and the traditions of his tribe and family.

When he was eight, Kaquatosh’s father died and the tough times that followed forced “Little Hawk” to an Indian boarding school in Keshena. There he experienced isolation and despair, but also comfort and kindness. Upon his return home, Kaquatosh remained a lonely boy in a full house until he met and befriended a timber wolf. The unusual bond they formed would last through both their lifetimes.

Kaqautosh’s memories are framed with a foreword by Dr. Verna Fowler, president of the College of Menominee Nation, who writes that the memoir is, “must reading for all of us to aid our understanding of other cultures, particularly young American Indians growing up on reservations because it connects them with their elders.”

For more information or to order a copy, visit wisconsinhistory.org/shop.