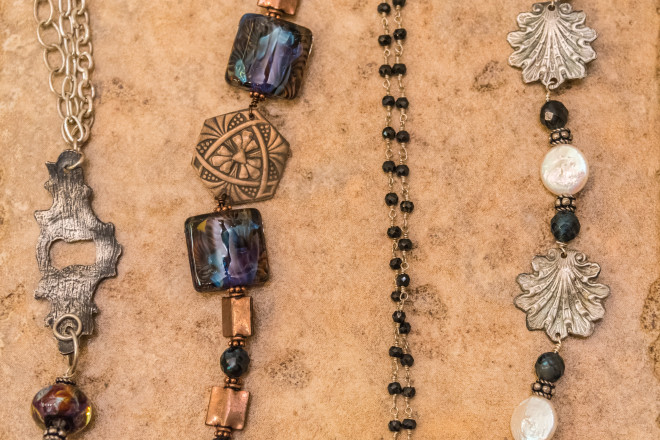 For every art gallery dotting the Door Peninsula, there are a number of “silent artists” in the county content with creating art for few, if any, eyes but their own. Occasionally they will jump from their home studio – often a second bedroom filled to the brim with art supplies or half of a kitchen table of organized chaos – to show in public, but for the most part, they get their joy from creating when it suits their fancy.

Egg Harbor artist Jean Fritschka is one of these artists. This spring, her metal clay jewelry was part of Meadows Art Gallery’s Colors to Spring exhibit, highlighting color use, textural play and technical skill – all of which are defining elements of Fritschka’s creations. But once the show came down the second weekend of April, she wasn’t too worried about where people would see her work next. 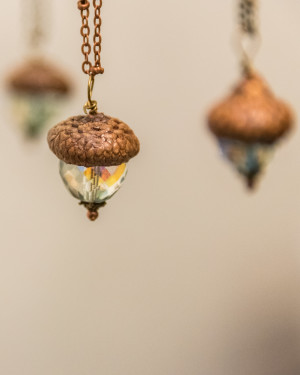 That attitude, mixed with a good dose of curiosity and fear of boredom, has been a longstanding part of the Sturgeon Bay native’s approach to art.

“It isn’t even a matter of being artistic,” Fritschka said. “It was more a matter of I wonder how they did that or I can’t do that, but maybe I can do it a different way.”

After decades of trying out different arts and crafts – from hand felting and weaving to woodworking and painting – Fritschka finally landed on a medium that suited her style and most importantly, kept her engaged.

For the past 10 years, she has melded her passion for nature and inspirational quotes with her skill in working metal clay to create bronze and copper pendants. These items are prepared using one of three molds – the organic-inspired ones of leaves, driftwood and twigs created by Fritschka using a two-part silicone mold, the commercial molds that reflect her love of nature, or the photopolymer plates that she designs using Photoshop.

As Tom Seagard, facilitator of Meadows Art Gallery, said of Fritschka’s designs, they “give viewers a pause to consider the things we may overlook.” One of her pieces at the gallery’s exhibit this spring was her pendant, “Not Today,” inspired by the HBO show Game of Thrones.

“In Game of Thrones, they say, ‘What do we say to the god of death?’ when they’re going into battle,” Fritschka said. “And they all yell, ‘Not today!’” 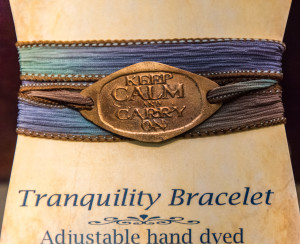 But the statement quickly took on more meaning as Fritschka saw it applied to everyday life, from the baby girl with cancer whose family heard of Fritschka’s designs and asked specifically for a small “Not Today” pendant to put on her hospital wristband to Fritschka’s friend’s mother who was also battling cancer.

“It isn’t necessarily even for people with cancer, though it’s appropriate, but it’s for anybody,” Fritschka said. “Today’s not the day I’m going to give up. Anything that you’re fighting, today is not the day. That resonates with me and that gives people pause.”

Fritschka is particularly drawn to sayings that resonate with strong women and to designs that reflect antiques. She is currently designing a medal for hospice caretakers based on Hebrews 13:2, “Be not forgetful to entertain strangers: for thereby some have entertained angels unawares,” and another molded after a World War I Victory Medal.

No matter the immediate appeal of the design or saying, it’s all about the artistic journey for this silent Door County artist.

“I just kind of do what makes me happy and I think that just resonates with other people who may or may not be like me, or may be like me a little bit,” Fritschka said. “I like organic. I like things that don’t look structured, that looks like something you just might happen on. And it’s like a little gift.”