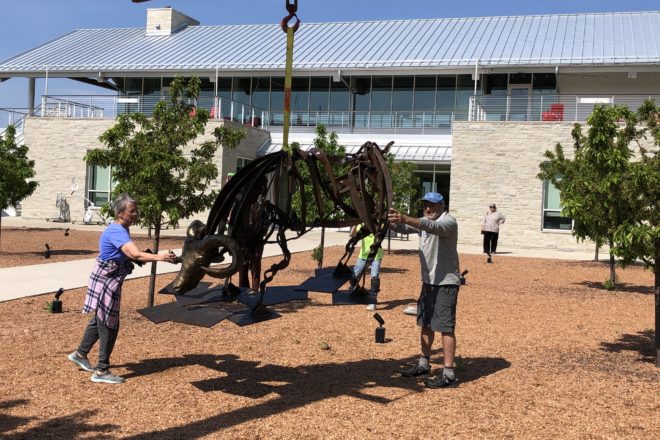 Milwaukee sculptor and metal artist Richard Edelman helps to guide his “Ram in the Thicket” piece into its location for a yearlong exhibition made possible by the volunteer-supported Public Arts Initiative of Egg Harbor. Helping him is Kathy Beck of the arts initiative. Photo by Craig Sterrett.

Two truckloads of art sculptures – some abstract, others not at all – arrived in Egg Harbor last week and will remain on public display for the next year in the form of a free exhibition inside and outside the village’s Donald and Carol Kress Pavilion.

Milwaukee metal artist Richard Edelman sold one artwork to the Public Arts Initiative of Egg Harbor in 2010 to coincide with the dedication of the marina, and he and his wife recently donated another: the new red, yellow and green “Three Dancers” near the Peg Egan Performing Arts Center, which is behind and across Church Street from the Kress.

On June 4, Edelman helped to guide a crane operator and construction crew as they placed his linear work titled “Adam and Eve” near the front door of the Kress Pavilion and library, and as they hoisted his massive “Jacob’s Ladder” bronze sculpture onto the second-story, wrap-around deck.

Edelman had nothing but compliments for the crew from Hunzinger Construction – a large Milwaukee contractor that builds massive projects such as a Komatsu plant, but took time on Friday to deliver, set and secure Edelman’s artworks.

The sculptor will return to Egg Harbor for a dedication of “Three Dancers” on Thursday, June 17, 4:30 pm, as well as a reception and program during which people can meet him and hear more about his artistic processes and work. They might also hear how much the volunteer-driven Public Arts Initiative of Egg Harbor impresses him.

“Kathy [Beck] and Dawn [Patel] and the arts group proposed to have a show associated with the dedication of the ‘Three Dancers,’” Edelman said. “The arts committee went to my website and picked their favorites, and then they worked out how the pieces would be placed.”

Edelman is also donating a large piece titled “Little Dancer” for installation at the intersection of County G and County T, uphill from the village beach.

“I have stuff all over the world, and this is the best group I’ve ever worked with in terms of the community aspect of it,” said Edelman, who had a good relationship and success through Woodwalk Gallery prior to helping the Egg Harbor committee. “They are looking at arts as integrated into the community. They are passionate about the arts.”

Edelman’s sculptures demonstrate his abilities in three metalwork methods: welding and cutting, shaping and forging through blacksmithing, and the traditional method of creating bronze sculpture. And he enjoys all three – from the new methods to the 5,000-year-old process of making a clay model, then a mold, filling it with wax, and then pouring in molten bronze that displaces and replaces the clay in the mold.

Contest and More inside the Library

Kathy Beck said it’s not too late to enter a contest for the best single photograph of just one topic: the new “Three Dancers” sculpture near the Egan center.

“The artist already did this sort of thing in Poland when one of his pieces was brought over there,” Beck said. “There will be prize money of $50, $100 and $150, and it will be for children up to 12, amateurs and professionals.”

A display about Edelman and his artistic processes will also remain inside the Kress Pavilion until Oct. 1.