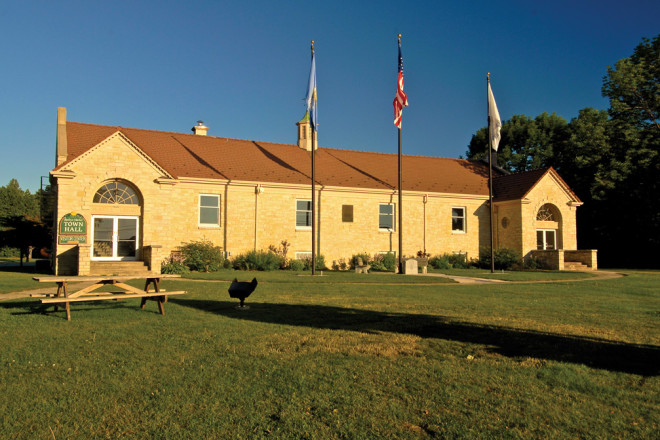 He was Baileys Harbor’s own Horatio Alger character – the fifth of eight children of Irish immigrants James and Anne Fegan McArdle, born in 1874 in a modest frame house south of the village, who rose to the presidency of a national corporation.

Michael McArdle earned the equivalent of a high school diploma at 15 by doing extra work assigned by the teacher at the local elementary school. He attended two summer sessions at the Wisconsin Teachers Institute in Jacksonport, and received his teaching certificate in 1890. The family raised his tuition by selling butter, eggs and produce from their garden.

At 16, he began teaching in Sister Bay, bicycling to work in good weather and boarding with the Judson and Wiltse families in the winter. After two years, he moved on to the log school in Ellison Bay, now owned by the Ellison Bay Historical Society and located on the Hanson Centennial Farm. He spent summers as a book salesman, traveling through Wisconsin and Michigan with a borrowed horse and buggy, earning money to complete a Master’s Teaching Certificate from Oshkosh State Normal College in 1893. His father mortgaged the family farm to help with his son’s tuition for law school at the University of Wisconsin – Madison, where he graduated with honors in 1901.

It proved to be an excellent investment. Armed with a law degree, Michael spent two years as a legal aid, settling government land claims in Montana and Washington, and for a short while had a private practice in Washington. He also found time to write five arithmetic self-help books for children and adults – under the pen name of Alvord G. Robinson – with story problems full of familiar Door County names. He worked for the U.S. Government in Panama while the canal was being built, and in 1903 he settled in Chicago, working as a business correspondent and salesman from a small bedroom furnished with a bed, a chair and his trunk. His starting salary was $12 a week, gradually increasing to $1,500 a year.

In 1905, he began working his way up the corporate ladder of the Chicago Flexible Shaft Company that produced industrial furnaces, clippers for humans and animals, and automobile heaters. Michael began work in the sales department, soon became advertising manager and from 1915 to 1925 was general manager of the company. In 1927 he was named president and CEO. Under his management, the company not only survived the Great Depression, but also diversified and expanded with subsidiary plants in Canada, Europe, Australia and New Zealand.

In 1910, the Chicago Flexible Shaft Company had begun producing its first Sunbeam-branded household appliance, the Princess Electric Iron, and it later became noted for other items like electric clocks, toasters and mixers, although the company name was not officially changed to Sunbeam Corporation until 1946.

Michael helped to design many of the Sunbeam products, as well as the tools and processes used to manufacture them. A chrome coffee set he designed was recently displayed in an online antiques and collectibles site for $225.

He often brought the prototypes of Sunbeam products back to Baileys Harbor to be tested by his sister-in-law, Anna, and he credited her with many subsequent improvements. (Anna, one of 16 children in the DeJardine family of Jacksonport, had worked as a servant on the McArdle farm. Michael and his brother James both wooed her, but in 1913 she married James. Michael lost a special woman friend on the Titanic and never married.)

There was probably not a person in Door County at that time who did not know the name Michael McArdle and take pride in the local boy who had done so well in the business world.

Michael made his home in an apartment at the Drake Hotel in Chicago. Although he enjoyed the advantages of city living as a supporter of the arts and a member of several prestigious golf clubs, he always considered Baileys Harbor his home and returned often. On one of those visits, he and his brother James discussed the possibility of building a golf course on the 350 acres that was formerly the McArdle family farm. A group of local businessmen, headed by Frank Blakefield, had options on the property for a similar project several years earlier but failed to raise the necessary funds.

Michael and James sketched the course on a piece of paper and walked the land to discuss a possible layout. A few weeks later, Michael returned with the professional from Westmoreland, his home course, and the concept of Maxwelton Braes began to take shape. Michael chose the name from a line in the song, “The Ballad of Annie Laurie” – “Maxwelton braes are bonnie.”

The course was designed by Joseph Roseman of Chicago. The nine holes west of Highway 57 opened in 1929, with the east-side nine completed two years later. VonHolst and Elmelie of Minneapolis were the architects of the Tudor-style lodge built of locally-quarried limestone, a tearoom, the Wee Inn at the entrance, and five cottages behind the lodge on the path to the lake. The facility also included tennis courts and a garage for guests’ vehicles, with accommodations for chauffeurs. The construction gave many local people jobs during the Depression, doing everything from picking stones on the fairway to laying stone on the buildings. The clubhouse was originally open for selected members and invited guests only. When construction was completed, Michael bought the McArdle homestead and restored the house for himself.

Michael had undergone surgery for cancer in the mid-1920s. It returned in 1932, and in April 1935, as his condition worsened, he wrote to parishioners of St. Mary of the Lake:  “Fifty years ago I served on this spot as an altar boy. More than once, I tumbled over in a faint from the bitter cold. Even then I had an ambition to see a nice, warm, comfortable Catholic church here, but I didn’t dream I could ever take part in it. But I am glad to say all is now ready to go ahead. You will have a larger lot to build on – plenty of room to build a church and rectory that will be extra nice; and further, you will have the means to do it with.”

Michael died five weeks later, at the age of 60. A memorial service was held at Cathedral of the Holy Name in Chicago, followed by visitation in the clubhouse at Maxwelton Braes. A funeral mass, officiated by the Reverend Father Darley, was held at the little frame church where Michael had once served as an altar boy. He was buried in the family plot at St. Mary of the Lake Cemetery on Red Cherry Road.

Ed Olson Construction of Sturgeon Bay was the general contractor for the new church. Henry Seiler of Baileys Harbor directed the construction, and Ferdinand Jorns of Baileys Harbor was the stonemason. Most of the construction was carried out by local craftsmen. The site of the old frame church became a parking lot. The new church was dedicated on May 30, 1936, a year after Michael’s death.

Michael’s generosity toward his home town was also reflected in his will, which provided $20,000 for the construction of a town hall capable of seating at least 300 people, and $15,000 for equipping and maintaining a public library room in the hall with dimensions of at least 16 feet by 16 feet. Michael’s brother James and his friend, William Oldenburg, supervised the building project. The town hall and library were dedicated August 21, 1938. Michael’s niece, Margaret McArdle was the first librarian. She reported that 109 cards were issued during the first month of operation. The library was eventually moved to space at the old Baileys Harbor School (now Orphan Annie’s) and, in 1995, to the spacious new facility attached to the town hall, still bearing the name of McArdle Library.

Appreciation for the treatment he received at UW Madison resulted in a large bequest to the university for a cancer research center at the medical school. The McArdle Memorial Cancer Research Laboratory celebrated its 50th anniversary in 1990 and remains dedicated to treating patients and finding a cure.

Seventy-seven years after Michael McArdle’s death, his generosity to the little town he loved continues to be visible. Many of his family members still live in Baileys Harbor. Incidentally, his great-grandnephew Doug Smith, the town clerk, works in an office in the basement that Michael specified was to be built under the town hall.

Information for this article was provided by Michael McArdle’s grandniece, Kristine Schorer, and a 1978 publication of the Wisconsin Historical Society.