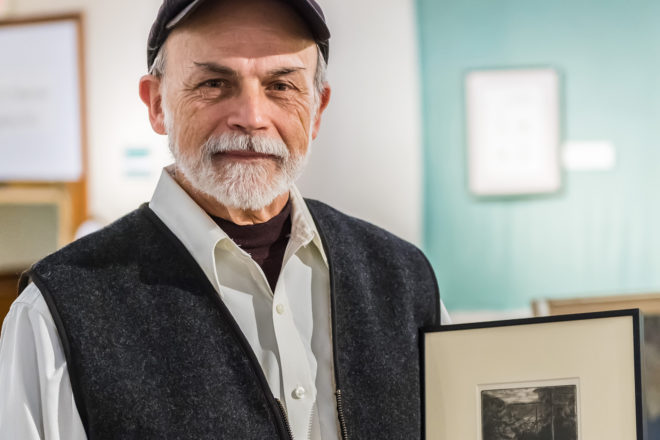 Michael Nitsch, assistant at the Miller Art Museum in Sturgeon Bay, holds his print of “Back Alley, Bayfield.” Photo by Len Villano.

The garden was a centerpiece of childhood for Michael Nitsch.

“As I child I was surrounded by gardeners,” the Sturgeon Bay resident recalled. “Between my grandparents and my aunts and uncles, they spent a lot of time in their gardens. It was important for preparation of food.”

He remembers the kitchen preparation of fresh produce, from picked to plated, and the way that preparation encouraged dialogue between everyone involved. It was a key ingredient to his decision to pursue life sciences in college.

“After the Navy I went into UW-Parkside, concentrated and focused on life sciences, mostly botany, and minored in art,” Nitsch said. “But then the art muses grabbed me and then I went into a full-blown art background from that point on.”

He remembers apologizing to a botany instructor for discontinuing his class, and the instructor’s thoughtful response:  “You see plants in a different way.”

Since making that decision 40 years ago, Nitsch has shared his visions of northern Wisconsin’s changing landscapes through various media, including intaglio, acid and non-acid printmaking methods, relief printmaking and mixed media.

A collection of these works, covering more than 20 years of Nitsch’s plein air sketches of his travels through the state, are now on display in the Door County Community Foundation’s winter exhibition, alongside works of fellow printmaker Bonnie de Arteaga.

“West of Omro” by Michael Nitsch.

Bayfield County, abutting Lake Superior, is home to a majority of Nitsch’s landscape sketches. He remembers vividly an area near Copper Falls that inspired some of his work – the plants in the understory, the orchids and ferns, the aroma of dirt – and a nearby wooded area that inspired his senses the same way. He also remembers coming back a year later to a different scene:   “the only thing that remains are tree stumps, and the vegetation is gone.”

“You start realizing how fragile things are,” he said. “And whether you deal with photograph, painting or printmaking, when you do your sketch, you capture that moment in time of what that image looks like and you appreciate it even more.”

Nitsch’s appreciation for the environment mirrors his love of printmaking, which he was introduced to by his UW-Parkside professor, the late Doug DeVinny.

“He just got me going to the surface,” Nitsch said. “It’s the idea of how you manipulate a surface. With printmaking you start to scratch and dig into a certain surface; whether it’s woodcuts or anything like that, you’re removing pieces out to create your image.”

Nitsch primarily works with copper plates and, despite advances in printmaking papers, inks and engraving possibilities, remains loyal to hands-on engraving. After moving to Sturgeon Bay eight years ago, where he works as museum assistant at the Miller Art Museum, Nitsch converted a chicken coop into his printing studio. There, with the help of a 400-pound, Italian etching press he has owned since 1982, Nitsch translates his landscape sketches into small-scale, monochromatic and texturally interesting works that imbue mystery and an appreciation for nature.

And for Nitsch, a trip down memory lane to those quiet days spent capturing the intricacies of the northwoods.

The Community Foundation is located at 342 Louisiana St. in Sturgeon Bay.