In the first sentence of his new book, Montaigne in Barn Boots, Michael Perry attempts to test an electrified pig fencer by seizing it with both hands. Two chapters later, while packing his van for a book-and-performance tour, Perry keeps reminding himself not to forget the cash box. He jumps into his van, heads down the driveway, belatedly remembers the cash box, dashes off to retrieve it, leaps into his car (the family’s second vehicle), blasts down the driveway, and suddenly confronts his idling van.

Perry’s beloved wife, Anneliese, watches from the kitchen window. Perry suspects that she may be taking notes. “I sometimes worry that she is just biding her time,” he writes, “gathering the evidence necessary to place me under professional supervision.” Perhaps she was taking notes when Perry settled down in his recliner, pointed his toes toward the warm hearth, fell asleep, and awakened to find his slippers on fire. 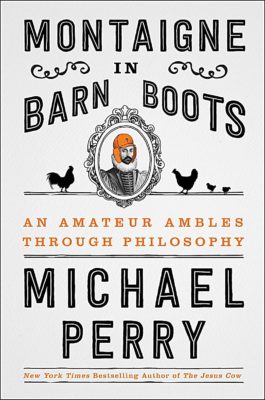 As of this writing, the absent-minded Perry is still at large, living somewhere in rural Wisconsin with his wife, two daughters, and a flock of chickens. He is, among other things, a radio host, a writer of “three-chord songs,” and the author of a stack of books that have titles like Danger, Man Working: Writing from the Heart, the Gut, and the Poison Ivy Patch. He has also produced a live-audience recording:  Never Stand Behind a Sneezing Cow. An affectionate father, Perry once took his daughters to a festival in Minnesota, where they saw a production of Shakespeare’s Twelfth Night and then had “a blast” at a demolition derby.

The writings of Michel de Montaigne (1533-1592) might appear to be an unlikely enthusiasm for a man such as Perry. Montaigne was a well-educated French nobleman who is usually given credit for inventing the essay form; Perry is a farmer “who still marks a second-place finish in the sixth-grade spelling bee as an intellectual pinnacle.” Perry’s interest in Montaigne came by way of a painful kidney stone. When Perry learned that Montaigne had written about kidney stones, he decided to investigate, and he discovered that Montaigne had written about almost everything:  thumbs, cannibalism, marriage, flatulence, freedom, religion, politics, radishes, impotence, and kinky sex. Perry was hooked. “You read Montaigne, you feel like you have a friend,” he writes. Perry’s book is an expression of his gratitude to Montaigne.

One of Montaigne’s greatest interests was himself and the workings of his mind. Perry admits that for some readers, Montaigne might seem like “the patron saint of the selfie generation.” As a disciple of Montaigne, Perry studies and dissects his own thoughts in an endless effort at self-improvement. “I have a photographic memory for useless details,” he writes. “The frost-fuzzed roofing nails visible on the underside of a haymow roof in January; Grandma’s Teaberry gum stuck to the plasticine of her cigarette box; the ringlet of hair just below the earlobe of that girl at the gospel service….But useful retention? The struggle is never over. And so I read and reread.” Perry snatches at his most flickering thoughts, and the last sentence of his book is “I must do better.” One might wonder whether all of this self-analysis is really healthy. Self-knowledge and self-improvement are good things, to be sure, but a measure of self-acceptance is also necessary if one is to keep in control of his wits. Too much self-evaluation is the hypochondria of the mind.

Perry himself sometimes wonders about the state of his wits. A clinical psychologist once informed him that he might be suffering from manic-depressive disorder (also called bipolar disorder). Perry is uncertain, but he admits that he sometimes falls into a “self-loathing fetal hunker,” followed by a burst of “sweet, giddy relief,” during which he dashes exultantly to his office and types up a flurry of rough drafts. Perry also suffers from a rare and painful digestive disorder that is usually diagnosed as the result of “stress.”

But readers occasionally glimpse another side of Perry:  among his many accomplishments, he is a nurse, an emergency first responder, and a firefighter. He has run toward an exploding ammunition cache to rescue a friend. He has been told “to pluck femur shards struck dart-like through a sheer metal car door.” Perry has lived an astonishing life. He has written books, composed songs, performed on the radio, farmed, built a happy family, saved lives, and fought fires – he has done all of these things while suffering from debilitating physical and psychological pain. He is disinclined to boast, but one conclusion is obvious:  Michael Perry is a hero.