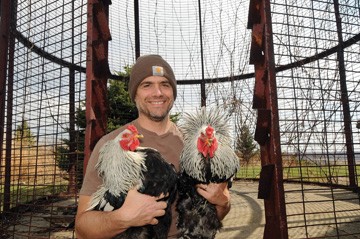 It comes as no surprise that New York Times bestselling author Michael Perry was voted class clown in high school. Since publishing the witty, humorous, and poignant memoir Population: 485, based on Perry’s experiences and observations moving back to his hometown of New Auburn, Wisconsin, he has released a number of equally witty, humorous, and poignant memoirs about his experiences since moving back to New Auburn: falling in love (Truck: A Love Story), starting a family and a chicken farm (Coop), and learning more about an elderly friend (Visiting Tom). He also became a well-received public speaker and humorist, sharing stories about the dangers of sneezing cows, the astronomical price of guinea pig hay, and the twists and turns of his brother’s dating life.

What may come as a surprise: Perry grew up a self-described “stoic Scandinavian, [who was] very shy in public.” To deal with his shyness, the young, proactive Perry signed up for forensics and community theater. “I didn’t have any idea it would have anything to do with my livelihood,” he laughs.

Fast-forward many years later, Perry draws large crowds with his stories and music (yes, he is a singer/songwriter as well). “It’s essential as a writer to get out there and meet people and entertain to sell your books. I really enjoy it. My favorite thing is to stay in a tiny room alone and write, but I have come to enjoy and anticipate live performances,” explains Perry, who will host Tent Show Radio, a Wisconsin Public Radio program, on April 25 at Door Community Auditorium in Fish Creek.

“It’s fun to say things and hear people laugh,” continues Perry. “I find myself opening up to people the way I wouldn’t if I met them in a grocery story. You connect in a way you never expected. My ultimate favorite thing about speaking and performing: looking people right in the face and telling them, ‘Thank you.’ As a writer, you’re not there when they read your work, when that exchange happens.”

As a regular reader and listener of Perry’s work and recordings, powerful and profound exchanges have occurred: crying at the death of his sister-in-law in Population: 485, smiling at the homebirth of his daughter in Coop, and laughing at the inappropriate jokes of his one-eyed butcher in the recording Clodhopper Monologues.

Recently one of Perry’s lines struck a chord in me, an aunt of just a few years: “Kids will break your heart with joy.”

“That line in particular just sprung to mind,” explains Perry, who felt its essence just last week when his six-year-old asked him if he would attend a father/daughter dance with her. “Joy and heartbreak were shoulder to shoulder,” he says.

Perry quickly admits to often struggling as he searches for just the right words. “Right now I’m doing a story about a country singer and he has a distinctive walk. You want to put it on paper so someone can see it. I’m excited there will be bad tries and false starts,” says Perry, adding, “A book has been percolating for a long time and there’s one phrase that I was really trying to convey. I went into old notes and there was a page and a half of the same line made slightly differently each time.”

Capturing details is essential for Perry, who often writes non-fiction that focuses on everyday people and situations, primarily people and situations in New Auburn. “I feel very grateful that I’m allowed to write about people and places I care about, not out of some romantic notion,” explains Perry. “Those people raised me, not to be a writer, but to be a person. I do my best to portray people I know.”

Recently, Perry delved into a completely different genre: young adult fiction. Why the drastic change? “I needed a gig. That’s the short, smart-mouthed answer,” laughs Perry, adding, “A few years after Population: 485, an editor approached me and asked if I would consider writing a young adult novel. I didn’t have a burning idea at the time. Three or four years later an idea suggested itself, I made some notes. It took me three more years to get the thing done.”

The post-apocalyptic tale, The Scavengers, will be released this fall. “I’m tentatively excited,” admits Perry. “I’ve always been on the record as a real respecter of genres. I don’t assume that I can just hop over and write fiction.” Yet, Perry also admits to enjoying the process: “It was fun to write a book where I was really trying to think like my daughter.”

Genre aside, Perry’s a damn good writer who participates in many extra-curricular activities: playing music, volunteering for his local fire department, and more recently, agreeing to judge the non-fiction category of The Hal Prize, a contest presented by this publication and Write On, Door County. “My advice [to writers]: just write with an open heart and an open mind,” say Perry, who adds that the stack of his submitted writings that received a ‘no’ would certainly rise higher than the stack of his submitted writing that received a ‘yes.’

“Write, submit and keep writing. The minute you submit, start working on something else,” suggests Perry. “Everybody has to find their way. I’ve been helped by so many teachers and writers; it comes down to the decisions you make all alone at the keyboard.”

Michael Perry will host and present a monologue at Tent Show Radio on April 25 beginning at 7 pm at Door Community Auditorium in Fish Creek. The program will also feature live music by the Blue Canvas Orchestra, Corey Carlson, and Katie Dahl. Tickets for the program range from $18 to $28. For more information or to reserve tickets call 920.868.2728 or visit dcauditorium.org.

To learn more about Michael Perry and his writing visit sneezingcow.com.