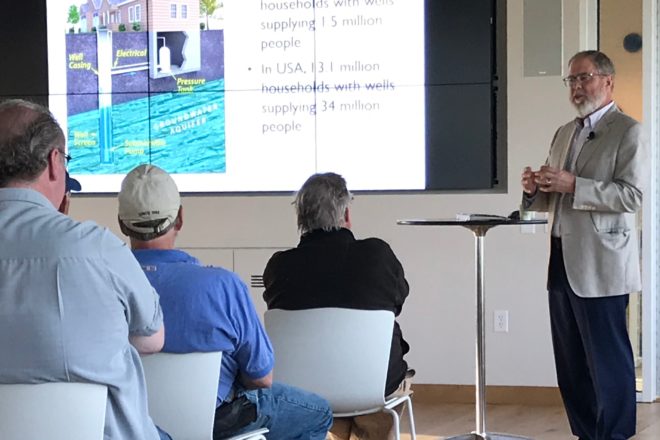 At a presentation at the Kress Pavilion in Egg Harbor on June 19, Mark Borchardt talked about the historical and ongoing leaky landscape that leads to contaminated water supplies in Door and Kewaunee counties.

Referring to a 1955 newspaper clipping about a contaminated well at the Ephraim Men’s Club, “People in Door County have been dealing with this problem for 64 years,” Borchardt said.

More than 60 people showed up for the presentation, hosted by the Door County Environmental Council.

“My job as a scientist is not to have an agenda,” Borchardt said. Instead, he analyzes data to come up with answers – particularly the answer to the long-burning question in Kewaunee County: who or what is polluting the wells?

Add to that leaky landscape:

When Borchardt and his team conducted a randomized sampling of Kewaunee County wells, they had three main goals in mind: Test for coliform bacteria; determine the fecal source; determine risk factors for private-well contamination.

The big takeaway for Borchardt? “Depth to bedrock really matters,” he said. “The deeper depth around your well, the less likely it is to be contaminated.”

The team also encountered a couple of surprises. Borchardt said that for the first time ever, Rotavirus C was found in the United States. “Previously it had only been seen in China and India,” he said.

The other rarity was salmonella. “We rarely see it in groundwater,” Borchardt said.

For his next round of data collection, Borchardt tapped into the excellent geographic information system that Kewaunee (and Door) County has on its website.

Borchardt said he wanted to do “what hadn’t been done before.”

He pinpointed the contaminated wells and then determined the land use around those wells, which led him to form this hydrogeologic aphorism:

“Land use around your well is far more important than well casing,” Borchardt said. “The state would like to spend more money on replacing wells. I’m not convinced that’s the best way to spend money. You can’t construct your way out of this.”