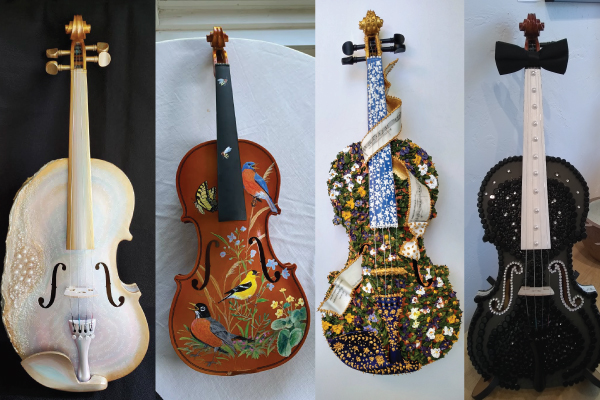 From left to right: “Pearls of Wisdom” by Bethany Kirwen, “Spring Symphony” by Fran Vail, “Sweet Joy” by Mary White, and “Symphony Under the Stars” by Liz Heller.

It’s enough of a challenge to transform a blank canvas into a work of art, but it’s even more so when that canvas is a violin. Fortunately, when Allyson Fleck, assistant artistic director of Midsummer’s Music, presented local artists with violins, the unconventional form generated an immensely creative reaction.

In honor of its 30th anniversary, Midsummer’s Music asked 10 local artists to transform violins into works of art to be auctioned off during a virtual anniversary gala in October. The artists will receive 50 percent of the high bid on their piece, and the other 50 percent will go to support Midsummer’s Music.

“When I delivered the violins, I have to tell you, the reaction from each artist was just so positive and beautiful and bright,” Fleck said. “They loved the idea that they were going to be artistically transforming a musical instrument.”

Each artist received the same violin to work with, but the resulting pieces are unique representations of each artist’s style and perspective. Some were inspired by a specific piece of music. Fran Vail painted her violin with some of her favorite Door County birds – a robin, goldfinch and bluebird – whose songs remind her of a spring symphony. Appropriately, her violin is titled “Spring Symphony.”

Some artists used media other than paint to transform their violins. Angela Lensch decorated hers, titled “The Gift of Tears,” with a mosaic of abalone shell, onyx, vango glass, ceramic tile, mirror tile and glass rod. Like Vail, she was inspired by a piece of music – a song that she wrote with her partner.

The inspiration for Bethany Kirwen’s violin creation, titled “Pearls of Wisdom,” coalesced under the overarching image of an oyster and a pearl: The shell of an oyster is tough and unyielding in order to protect the organism within, but when sand breaches the shell’s barrier and creates an abrasion within, that abrasion becomes a beautiful pearl.

Using a molding paste mixed with paint, Kirwen built an oyster-like texture on the back of the violin. Then, using a cake-decorating tool, she piped the medium onto the violin according to the organic patterns she saw on a reference oyster shell.

On the front of the violin, she used construction foam to build out the waist of the violin to resemble the wavy edge of an oyster shell. There, she placed several glass beads painted iridescent white to resemble pearls.

In May, when Kirwen began brainstorming for the project, she was in strict lockdown, and, along with the rest of the world, she was feeling uncertain and afraid. She felt an urge to record the complexity of the terrifying situation that the global community had suddenly found itself facing, as well as the moments of surprising hope and strength that arose in reaction to the crisis.

On the violin, written in subtle silver marker, Kirwen inscribed words that she came up with while in lockdown to describe the state of the world. The back of the violin includes words that reflect some of the fears and anxieties she observed, and the front features words that reflect a more hopeful attitude and the productive takeaways that Kirwen believes we can gain from this crisis – in other words, the pearls of wisdom.

“It was kind of a dual project between recording what’s going on in the world and honoring Midsummer’s Music by transforming the violin into an art piece,” Kirwen said. “I felt it was important to both tell the real story and to honor the wisdom we will gain through working together and expressing our creativity at this time.”

This is not the first time Midsummer’s Music has collaborated with local artists. For its 25th anniversary, the organization partnered with artists as part of a project called Musical Chairs, in which artists received chairs to paint that were later auctioned off at a gala. The main difference is that the 30th anniversary gala must be held virtually.

Although it will not be what Midsummer’s Music originally envisioned to toast its anniversary, Fleck is optimistic. Because of the virtual format, an event that was once limited to 100 participants can now be open to more people than ever before.

“We take lemons and make lemonade,” Fleck said. “We are fulfilling our mission of bringing music to Door County, but now we can say ‘and beyond’ with an underline and an exclamation point.”