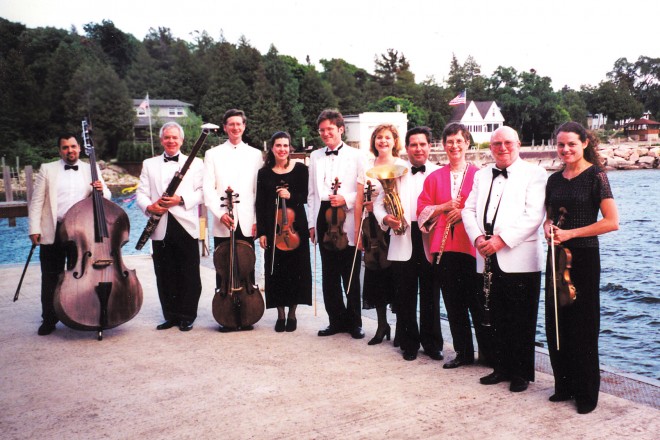 As with so many good things in life, Midsummer’s Music Festival began as a conversation among friends. And, as often happens in Door County, those friendships were formed amid the excitement of building a long dreamed of home on the peninsula. In this case the home belonged to Jim and Jean Berkenstock, longtime visitors to Door County, and principal bassoonist and flutist, respectively, for the Lyric Opera of Chicago.

In a sense, their story is all about building – friendships, a home, a thriving musical organization, a community of musicians and music lovers, and the amazing things that can happen when people follow their dreams.

The idea for an early summer music festival grew out of conversations between Jim Berkenstock and Bob Hastings. Jim and Jean had met Bob through Hugh Mulliken in the course of building their home near Gills Rock in the late 1980s. Their mutual interest in music and in creating cultural offerings in Door County during the “shoulder” seasons soon led to meetings with many other like-minded enthusiasts.

Early on, the name Midsummer’s Music was floated as a connection to the summer solstice (a time joyfully celebrated in areas of Scandinavian heritage). And soon, planning for a first season in 1991 began, with five concerts arranged around Ephraim’s Fyr Bal Festival (itself a solstice celebration).

A total of eight musicians performed that first season including several who are still in the ensemble: Bill Koehler, Mel Warner, Walter Preucil, and Jean and Jim Berkenstock. Stephanie Preucil was in attendance that year, but didn’t perform (she has every year since).

During those early days The Peninsula Arts Association offered much needed logistical and financial support. And, a key figure throughout this period was Alicia Mulliken, who volunteered many hours to help organize and implement the festival.

As the organization grew over the years, concerts were added, new venues were tried, new musicians came to play, and a wider audience began to experience extraordinary and exciting programs for piano, winds and strings in historic, romantic and intimate settings all around the Door Peninsula.

Summer 2006 marks the 16th Anniversary Season for Midsummer’s Music Festival under the artistic direction of Jim Berkenstock. Twenty-two performances are scheduled for the June/July season, with four more taking place over the Labor Day weekend. A Holy Week performance of The Seven Last Words of Christ, and two Renaissance Christmas concerts in December have become popular annual events. And, Midsummer?s Music is proud to again present the renowned Pro Arte String Quartet at Bjِrklunden Lodge on May 10th.

Happily, Jim and Jean’s dream has evolved into the delightful reality that is Midsummer’s Music today. Musicians from the Chicago Symphony Orchestra, the Lyric Opera of Chicago, the Pro Arte Quartet, and artist/faculty from leading Midwest universities come to Door County throughout the year to combine their talents in some of the most inspiring classical music performances one is likely to hear anywhere. If you’ve never attended a concert, dress is casual, and the atmosphere is welcoming. For information please visit www.midsummersmusic.com or call (920) 854-7088.