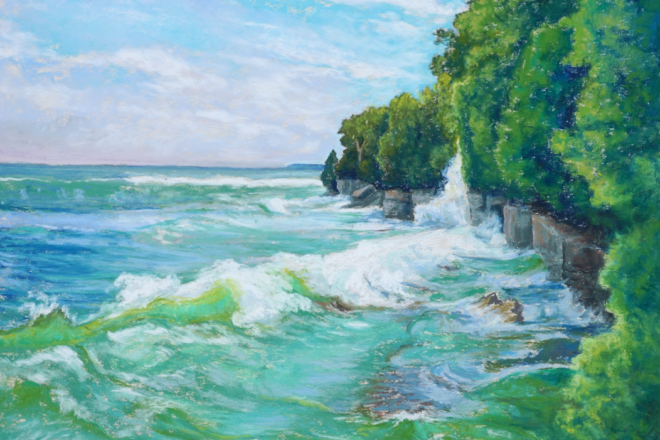 Niki Kaftan’s pieces are inspired by Edvard Grieg’s Quartet in G Minor, Op. 27, which are a part of the “Musical Mountains and Fjords” program. Submitted.

The Midsummer’s Music annual concert series has adapted to the times by using technology to celebrate its 30th anniversary and deliver chamber music to audiences near and far through livestreaming.

During the first week of August, the group began using its website, Facebook page and YouTube channel to livestream performances every Wednesday, Thursday, Friday, Saturday and Sunday. For each concert program, Part I is performed Wednesdays, 7 pm; and Fridays, 8 pm. Part II is performed Thursdays, 7 pm; and Saturdays, 8 pm. Both parts are combined Sundays, 3 pm, with live interviews added.

After the first two weeks of virtual live performances, Russ Warren, the marketing and media director for Midsummer’s Music, reported that tens of thousands of viewers had tuned in to the concerts through the digital platforms.

On Aug. 21, 22 and 23, fans can catch the final performances of the third program, titled New Voices, featuring the work of three contemporary composers, including Jacob Beranek, Midsummer Music’s composer-in-residence.

The fourth concert program, titled Trois Compositrices for the three women composers whose works will be performed and livestreamed, will debut beginning Aug. 26, hosted by Lori Skelton of Wisconsin Public Radio.

The fifth program – Musical Mountains and Fjords – will debut Sept. 2, hosted by John Clare of 107.3 in St. Louis and Sirius XM. The title reflects the landscapes of the two featured composers: Elfrida Andrée of Sweden and Edvard Grieg of Norway.

The sixth and final concert program – Friends of Old – will debut Sept. 9, hosted by Wisconsin Public Radio’s Norman Gilliland. The title refers to the relationship between the two featured composers, Anton Reicha and Ludwig van Beethoven.

“The two actually became friends after Reicha moved to Bonn, Germany,” Warren said. “The two quintets in this program suggest their close and lifelong musical relationship.”

In addition to the world-class music performances, viewers are also treated to other art forms during the matinee shows, including poetry reading and visual art.

“The poetry is done in collaboration with Write On, Door County,” Warren said. “We’ve worked together since 2016, where poems – usually specifically related to a piece of music Midsummer’s is performing – are read during certain concerts. For our virtual season, the poetry is inserted at ‘intermission’ during the Sunday matinees.” Jerod Santek, Write On’s executive director, also participates to introduce the poet.

There’s a similar partnership with Woodwalk Gallery in which artists are asked to create works based on inspiration from pieces that Midsummer’s Music is playing. Art from two Woodwalk Gallery artists – Niki Kaftan and Ken Vonderberg – will be part of the schedule in the future.To learn more and watch livestreamed performances, visit midsummersmusic.com, facebook.com/MidsummersMusic, or Midsummer’s YouTube channel.

Join Midsummer’s Music on Saturday, Sept. 5, for a live, socially distanced, outdoor performance of the Friends of Old program on the grounds of Woodwalk Gallery in Egg Harbor. The starting time has yet to be announced.

The safety of the audience and musicians is of utmost importance to Midsummer’s Music, so the outdoor area will be set up for every two patrons to have their own eight-foot-by-eight-foot block. Concertgoers should take their own chairs, refreshments and masks, and they should dress for potentially cool weather. All are welcome to take their own picnics.

Tickets will be available shortly and must be purchased in advance. No walk-ups will be permitted.

Midsummer’s Music follows all COVID-19 guidelines from the Centers for Disease Control, the state and the county, including wearing masks except while eating or drinking, limiting the crowd size to 50, and social distancing. Attendees understand that there is a risk to being in crowds, and they indemnify Midsummer’s Music from liability.

Those who have been around someone who is ill from COVID-19, are ill themselves or suspect they might be ill should not attend.