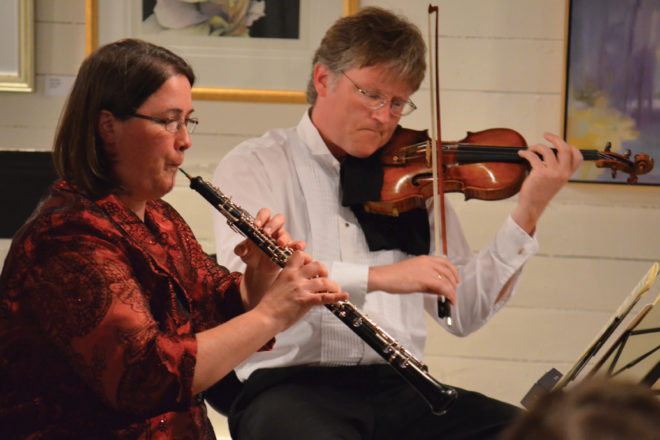 The three works on this program all possess a kind of heartfelt, homebred sentiment that is honest and forthright without being overly sentimental. They seem to suggest inner feelings rather than those worn on the sleeve.

The first two composers have much in common in addition to being unknown to most contemporary audiences. They both are of German birth and come from familial lines of musicians.

Braun, who composed “Adagio for Oboe and String Quartet,” studied oboe under his father, Johann Friedrich Braun, and became a member of the Berlin court orchestra at the age of 13. “Serenade in A Major, Op. 10,” is by Naumann, who is best known now as an arranger and editor of the music of J.S. Bach, Mozart and Mendelssohn. “Sextet in A Minor, Op. 94,” is the first of four Dvořák pieces being performed by Midsummer’s Music this season.

Concerts play at 3 pm on June 24 at Sister Bay Moravian Church; 7 pm, June 25 at Woodwalk Gallery (a memorial concert for Nancy Eriksson); 5:30 pm, June 27 at the Old Gibraltar Town Hall; and 7:30 pm, June 28 at Björklunden. An optional dinner at Alexander’s is available for the June 27 concert.

Most concerts are $29 for adults, $10 for students, and children 12 and under are free. Premium prices apply toward opening night, salon/home concerts, dinner concerts and other special events. Subscriptions consisting of four concert tickets and flex-packs of six or eight tickets are available. For tickets, call 920.854.7088 or visit midsummersmusic.com.