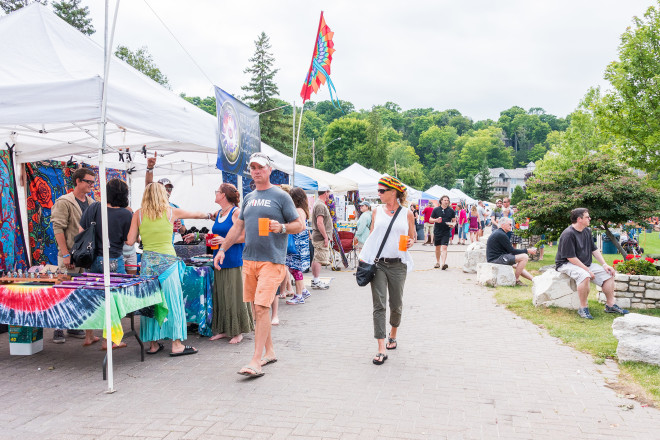 A joint meeting between the Sister Bay Parks, Finance and Marketing Committees with members of the Sister Bay Advancement Association (SBAA), focused on the future of the Midwest Sunsplash Music festival. The committees took no action at the meeting but discussed possible changes to the festival for next year.

Village Administrator Zeke Jackson opened the meeting with data on ticket sales and finances. While hearing anecdotes of both passionate support and vehement opposition to the festival, Jackson felt the empirical data painted a better picture of how the weekend went. This data raised questions about the festival’s accounting and how much money the village actually made or lost during the festival.

Admission fell short of what was expected, drawing 1,367 of an estimated 2,000. Only 73 attendees paid for general admission tickets during pre-sale before the festival. The remaining ticket sales happened on Saturday, when organizers lowered ticket prices from $30 to $5.

“The price point was probably above market price for what people were willing to pay,” said Jackson, referring to the original $30 admission price. “For 27 years we’ve been training people that if you come to a musical event in Sister Bay, like Concerts in the Park, it’s free. So there was quite a bit of learning that needed to take place.”

“If we lost money in a business aspect, then I wouldn’t even do it,” said Pita Kotobalavu near the end of the meeting when the public was allowed to speak. Kotobalavu is a festival organizer and lead singer of Unity the Band, the headlining act for the Midwest Sunsplash.

The presentation by Jackson listed a profit of nearly $19,000 for the festival. But Denise Bhirdo, SBAA board member and former Sister Bay Village Board President, found inconsistencies in the accounting.

The report listed a local funding appropriation of $15,000 as revenue for the festival, but not as an expense. A 25 percent local funding match, amounting to $5,800, tied to the JEM grant that the village received from the Wisconsin Department of Tourism also fell under the revenues but not the expenses line.

Although the village did not spend its entire $5,800 local funding match for the grant, it did put in about $19,000 to bring the festival to Sister Bay. When taken from the $19,000 profit that Jackson originally listed, the festival broke even.

Following the clarification on accounting, Jackson stated, “If you’re going to get down to profitability, what I would tell you is that we had no profit to speak of.” He included that many of Sister Bay’s festivals and events do not break even, making this a financial success.

Many at the meeting believed breaking even to be a success.

“The original objective of Sunsplash wasn’t to make a profit,” said Clove. “The objective was to expose people to our waterfront and all the improvements Sister Bay has made. We didn’t lose money, we did expose people to it, now how can we make it better?”

Kay Halbrook is a festival organizer and has written several grants for the Door County Chamber of Commerce while working in marketing for the county. She assured those at the meeting that this was one of the most successful inaugural events she has ever seen.

“The goal was always to break even the third year,” said Halbrook. “It takes a few years to get this thing tweaked properly.”

Halbrook stated they hoped to expand the event over more days and potentially include other surrounding communities. While discussing possible changes to the event, committee members wanted to condense the event even further.

Village Board President Dave Lienau compiled all concerns and suggestions into a list. It included choosing a different weekend, shortening the duration of the music and problems with the camping provided by the festival.

While there were no complaints of noise or inappropriate behavior at the campground, Bhirdo did not think the village should be bending its own zoning laws, which prohibits camping on village property. The same principle applied to music lasting until midnight when a village ordinance calls for music to stop at 10 pm.

Lienau suggested forming a Waterfront Oversight Committee to examine the issues surrounding the Midwest Sunsplash festival to determine the best practice for the event next year or other events that may take its place.

Festival organizers, Jackson and SBAA Coordinator Paige Funkhouser felt confident in the ability to improve the festival and return a profit in the coming years. Although no action was taken at the meeting, communication lines will be open to consider any changes the groups plan to make next year.