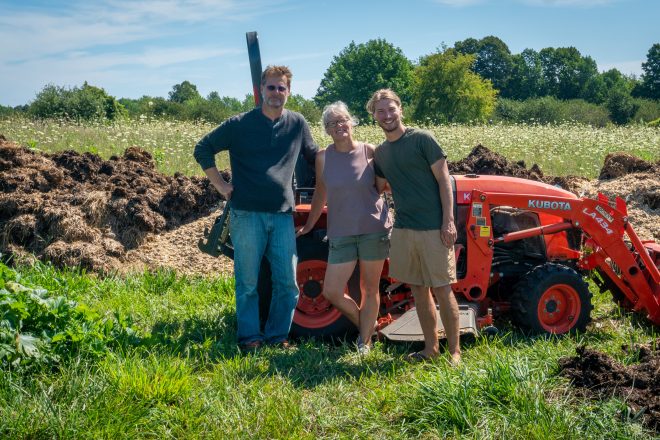 First generation farmers Dan and Char Fatke, along with son Tay, are the force behind Mighty Wind Farm. Their company grows community-fresh food from soil that’s built, in part, upon the scraps of community restaurants and individuals. Photo by Rachel Lukas.

Mighty Wind Farms, owned and operated by Dan and Char Fatke and son Tay, wants your wasted food. No, really –– they do. In fact, the beginning farm located in Sister Bay even has a place neighbors and community members can drop their unwanted kitchen scraps — vegetable peels, apple cores and other compostable items — at their farm on Waters End Road.

“As a farm, we can only be as productive as our soil is,” said Tay Fatke. “Good soil leads to good food.”

While farming may be relatively new to the Fatke family, the basics of good soil health were not. Tay went to school for agriculture, receiving an associates degree in sustainable agriculture from Northeast Wisconsin Technical College, in addition to working on various farms in Wisconsin and North Carolina. In 2020, he was a presenter at the MOSES Organic Farming Conference.

Char Fatke remembers her mother incorporating compost into her vegetable gardens by digging trenches around the garden plots, filling them with food scraps and covering them with earth.

“Just watching her and learning from her taught me early on that composting is important,” Char Fatke said.

When Char Fatke took a job at Piggly Wiggly in Sister Bay during the height of the COVID-19 pandemic in early 2020, an idea took root. What if unwanted produce and food scraps from area restaurants went into the soil instead of a landfill?

“At work I would talk to a lot of the restaurant people, and I just told them we would love to have their compost,” she said. “It’s silly for it to go into a landfill when we can use it.”

That launched a fledgling composting program between Mighty Wind Farms and area restaurants. Restaurants connect with the farm, which provides them with a bucket or a garbage can for their pre-consumer food scraps.

“Once it’s filled, they can either bring it here or we pick it up and add it to our compost piles,” she said.

The farm asks that the scraps not include any meat or bones, but veggie and fruit scraps are welcomed. In addition to the discarded produce, the Fatkes are also experimenting with chicken manure from their flock of 110 laying hens, as well as goat manure Tay collects from his daytime job milking goats for Door County Creamery.

Like so many aspects of farming, it’s been a learning experience.

Learning curves aside, the project has allowed them to build a stronger sense of community while building better soil on their farm.