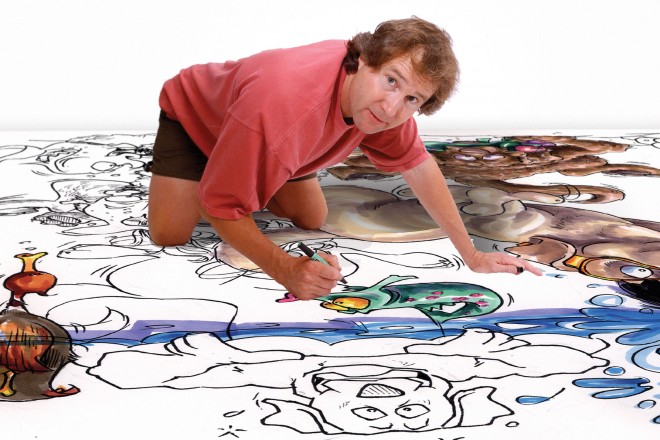 Just like most talented people who enjoy what they do for a living, Mike McCartney will tell you that his

job is easy. He is able to sit in a studio overlooking a beautiful, pristine setting in the middle of the county while he draws and creates caricature after caricature. His unmistakable style has become very well known beyond the borders of Door County and, as a result, he has become somewhat of a legend in the world of dog shows.

Mike did not begin his career by capturing dogs on paper; he began by sketching people at Mai Fest back in the late ’70s for a mere $4.00 per drawing. “Honestly, my sketches were a little crude; however, people were standing in line, waiting for me to draw them.” As he became more adept at portraying people’s characteristics, others took note. He landed a job at Wisconsin Tissue Mills designing humorous bar napkins. Even though interest in his art was growing, at this point it was more of a hobby. He worked at Bay Shipbuilding in Sturgeon Bay for a steadier income and eventually began working for Bill Goettelman at F.L.S. Banners, also in Sturgeon Bay. The skills he learned at F.L.S, such as silk screening, later proved useful when his hobby grew into something altogether larger.

McCartney’s parents, avid Great Dane enthusiasts, had Mike design a special mug for the Great Dane National Show in December of 1991. His mom suggested that along with selling the mug at the show, Mike should also bring his easel with him. That turned out to be a very good suggestion, although everyone at the time thought that Mike would be drawing people. When the lines of people appeared in front of Mike and his sketch pad, they were looking for their dogs to be drawn. Mike and his wife, Dede, claim Christmas of ’91 as a major turning point. Dede explained, “Our lives had simply changed. We knew that we had something good.” Mike gives Dede almost all of the credit for his success. “This is Dede’s vision, too. She comes up with different suggestions and then pushes me hard to finish them. Her ideas are brilliant.” Mike, modest about his natural gift for capturing personalities, be they of people or dogs, insisted again that his part is easy.

Apart from Dede’s tremendous influence and support, Mike also had the aid of his children after the first show. “We found out the next show was in Minnesota the following month, so I returned home and started drawing in a fury creating dog greeting cards.” Stevi, then 5, and Butch, then 10, helped fold the cards after they were printed to prepare for the show. McCartney’s designs continued to gain fans all over the country as they started traveling the show circuit with their ever-expanding range of merchandise.

While sitting in the studio of his Cartoon Factory, as the McCartney workspace and warehouse have come to be known, Mike described his ideal working environment. “I like drawing best first thing in the morning with a double cappuccino, a real cappuccino. I usually have an idea or a theme that I have been thinking about from the day before. It is a lot easier to draw when the ideas flow easily. It can’t be forced.” Sometimes while drawing one item, such as a page from the 2005 calendar that he is currently working on, he will have a sudden idea about another project and will have to sketch it out quickly before it fades away.

Though he has had no formal training as an artist, Mike does study the work of others. “I like the work of other cartoonists like Jack Davis, and Bill Watterson of Calvin and Hobbs. They are my biggest influences, but I also like Norman Rockwell, Dr. Suess and Chuck Jones.” Mike also confers with local artists. Emmett Johns, an artist with a gallery in Fish Creek, has offered advice to Mike. “Emmett suggested at one point that I was stuck in a rut and that I should experiment with new styles. That was how my Deco Dogs range came about.”

Mike has added insight from his two Australian shepherds, Amos and Cozmo. “Dogs are totally entertaining and they are completely therapeutic. Amos and Cozmo inspired the Rug Dog series which represented all dogs – every dog lies with his face down between their paws.” If you have a dog, you know the pose he means. It is the one that is complete with a sigh and large trusting eyes looking up at you.

People in the animal world might be waiting for McCartney to start drawing something apart from dogs, though it does not seem likely. When asked if he ever considered drawing cats, Mike replied, “I only draw cats when they are at the receiving end of dog humor.” Considering that there are 140 different breeds of dogs and Mike’s range covers 75 breeds, there is plenty to keep him busy for some time to come, especially since his enthusiasm for dogs seems only to grow with time.

One of Mike’s greatest rewards as an artist was when he was asked by the American Kennel Club to participate in Dog NY, a fundraiser for search and rescue dogs like those used after 9/11. Nestle Purina Petcare Company flew Mike and his daughter, Stevi, out to New York so that he could recreate one of his previous designs on one of the German shepherd statues. His patriotic dog, along with 300 other dog statues were sponsored and displayed all around New York City in August of 2002. As a further honor, Purina then purchased McCartney’s dog, titled “Paws for Peace,” and has it on permanent display at their headquarters in St. Louis.

Another highlight for Mike was being asked to illustrate the book Men are Dogs: A Woman’s Guide to Choosing Her Breed of Man. Jeannette Wright, the author, contacted Mike and said that his artwork would be a perfect accompaniment to her comical relationship book. Men’s characteristics are compared with those of dogs in such categories as activity level, playfulness, exercise required, protectiveness and ease of training. Given Mike’s sense of humor and ability to see the human side of dogs, it was an ideal collaboration.

Even with all of the success of McCartney’s Dogs, both at shows and on-line, Mike continues to be unassuming yet passionate about his work. Between drawing and filling orders, he and Dede are now able to see their children pursue their own artistic dreams. Butch graduated from the University of Wisconsin at Eau Claire and is now working at the Wausau Herald as a staff photographer. Anyone who has seen his work can recognize the McCartney genius shining through. Stevi began school at the Illinois Institute of Art this fall. Mike, while slightly apprehensive to have her leave home, cannot hide his excitement in her choice of schools, “What a candy store!” he says. “My art career started at age 35, but my kids have the advantage of starting so young. They are both so focused and have such high standards.” Stevi will go into visual communication with a possible goal of being a magazine editor. She will undoubtedly have her parents’ total encouragement.

With their website replacing the need to attend all the dog shows, they have scaled back and now only attend four major shows a year. This leaves more time for them to enjoy their home in Door County while still reaching their customers. They plan to hopefully do some more relaxed traveling. Although, no matter where they go they see their work walking around in tee-shirt form. Once while on top of Mount Baker in Washington, Mike saw someone wearing one of his designs. He went up to him and said, “Hey, nice shirt!” The man smiled and thanked him never knowing that he was talking to the artist himself. Dede thought Mike should have told the man his name, but Mike preferred to keep his identity unknown and simply enjoy the fact that his work had reached the top of the mountain. How fitting.

For a look at McCartney’s work, visit www.mccartneysdogs.com.

Mike: Our backyard – the view is like heaven. It’s what keeps us here.
Dede: Home