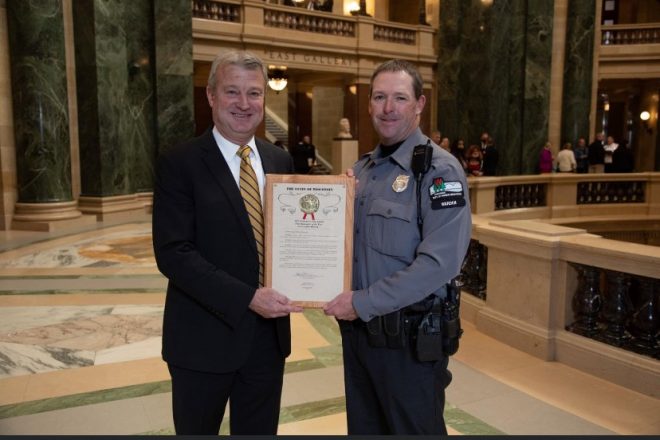 As a conservation warden for the Department of Natural Resources (DNR) for almost 30 years, Neal has served the northeast region of the state with selfless dedication and professionalism, Kitchens said.

DNR conservation wardens are credentialed law-enforcement officers who enforce all natural-resources and recreation safety laws, educate the public about conservation topics, and provide law-enforcement services at state parks, forests and trails. In addition to responding to natural disasters and public-safety emergencies, they also assist other law-enforcement agencies when requested.

The Wisconsin State Assembly established a program in 2019 through which a first responder in each of the state’s 99 Assembly districts is recognized with a First Responder of the Year award. Kitchens said he had received a number of worthy nominations from across the 1st Assembly District, but he selected Neal because of his longevity and all of the extraordinary things he has accomplished during his impressive career.

“So many times he has put his own life on the line to ensure the safety of our local residents and visitors,” Kitchens said. “We all owe a great deal of gratitude to Mike and all of Wisconsin’s first responders who make such a large impact in our communities.”

Neal, a Baileys Harbor resident, has saved numerous lives in the waters of the peninsula over the years. In December 2020, he helped rescue 43 people from unstable ice off Larson’s Reef. Earlier that year, he also saved four individuals who had had an incident in Nicolet Bay with their kayaks and paddleboards.

“This is just the tip of the iceberg of what Mike has done over the decades to make sure that all of us are safe, even in the most dangerous situations,” Kitchens said. “We can always count on Mike to step up to the challenges of our area and be the best public servant possible.”

Neal traveled to Madison to accept the award in person. He deflected the praise away from himself and onto all those who respond to emergencies.

“It’s a team,” he said. “Every single one of these calls, there’s a whole lot of people involved. It’s a team effort.”

Neal admitted he’s not an award guy and said it’s his job, not an achievement.

“It’s just what we’re supposed to do,” he said. “You put us into these positions, and this is what we need to do, and I look at it as I should try and do the best I can. It was just instilled in me: You do 100%.”