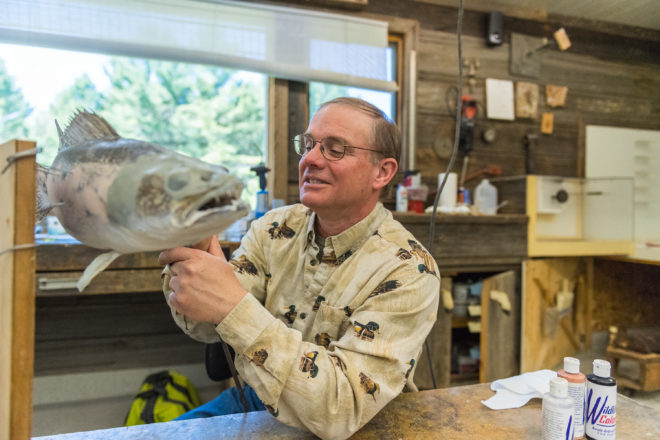 It’s 558 miles from Egg Harbor to Sioux Falls, South Dakota. An online travel guide says it can be driven in fewer than nine hours, but it’s taken Mike Orthober nearly 47 years to get there, and his route has zigzagged all over the U.S. and included many trips to Canada, England, France, Italy, Finland, Russia, Estonia, New Zealand and Namibia.

When Mike became interested in taxidermy at age 11, he borrowed a book and some tools from his uncle in Jacksonport, Roger Orthober, and worked on his family’s kitchen table, never dreaming that one day he’d be world-famous, giving workshops on multiple continents, judging international competitions and making friends everywhere he traveled.

On July 27 in Sioux Falls, Mike will be inducted into the National Taxidermy Hall of Fame. It’s an exclusive group. Since it was founded in 1974, just 44 people have been inducted, including several who were recognized posthumously, such as Charles Willson Peale, the famous 18th-century portrait painter who was also America’s first taxidermy artist; and Carl Akeley, the 19th-century American considered to be the father of modern taxidermy.

It’s a major feat just to be a candidate for the Hall of Fame. In even-numbered years, a 20-member committee culls the nominations. Eighty percent of the committee members must approve a name before it can advance for consideration as one of the two posthumous/historical nominees or four living nominees presented to the three-person final-selection committee. The rules permit no more than half of the six nominees to be inducted at the following year’s convention.

This year, Mike is one of two living nominees chosen for induction, and no posthumous/historical nominee will be honored. The fact that Mike was nominated by Larry Blomquist, chair of the World Taxidermy Championships and publisher of Breakthrough magazine, shows the respect he has earned in his profession.

By the time Mike was a sophomore at Sevastopol, he had a little basement workshop and a part-time business mounting birds. He joined the Wisconsin Taxidermy Association in 1981 and won an award at his first competition the next year – second place for a mounted squirrel. He’s missed only one WTA competition during the past 38 years, served on the board of directors for four years and chaired the competition committee for 17 years.

In 1989, Mike won his first blue ribbon in competition. Six years later he won his first Judge’s Best of Show in Wisconsin and went on to win nine more Best of Show awards at other competitions. By 2000, he had established himself as one of the most accomplished taxidermists in the world. His major winnings include 10 Best of Show awards; nine WASCO awards (for the most artistic entry, which is the most coveted in every competition – “like an Oscar”); two first-place World Master of Masters awards; and one third-place, two second-place and three Best in World awards.

One of his goals since he began entering international competitions was to win Best in World for a mounted bird, and he finally did it this year with an Australian magpie. In 2004, he was named the National Taxidermy Association’s Taxidermist of the Year.

Mike’s accomplishments and vast knowledge of all areas of taxidermy have led to judging assignments in competitions worldwide. Highly sought after as an instructor, he’s presented more than 100 seminars. Habitats, manikins and mounts for birds, fish and mammals that Mike has created are sold worldwide by the McKenzie Taxidermy Supply Company in North Carolina.

He’s earned honors enough for several lifetimes, but Mike hopes his legacy will be his teaching. Not so much the seminars he’s done for other professionals around the world, but for the taxidermy class he’s taught at Sevastopol and Southern Door High Schools for the last 10 years and the hunter-safety class, including wildlife identification and game care, that he’s co-taught for 16 years.

For three years, he did a taxidermy exhibit and lecture at the Door County Historical Museum in Sturgeon Bay when the museum participated in the Elderhostel program. The museum dropped out of the program some time ago, but Mike has continued to offer it about 10 times each summer as a community service.

In 1997, Mike was contracted to build a wildlife exhibit at the Door County Historical Museum. He designed the diorama and painted the background mural, which is approximately 30 feet by 14 feet, with a side wall that’s 14 feet by nine feet. He also built the habitat, which includes a beech tree, rock ledge, stone fence, water scene and ground cover. Throughout the years, he’s mounted and added about 140 birds, from hummingbirds to raptors; eight mammals; and assorted reptiles and amphibians. Most were mounted at the museum while people watched him work and asked questions. Mike still adds specimens every year. He also does many protected birds for nature centers and schools – his favorite facet of taxidermy.

Charles Willson Peale, who mounted the first large habitat groups with painted backgrounds in Independence Hall in Philadelphia and the Library of Congress; and Carl Akeley, who was responsible for many of the early exhibits at the Smithsonian and Chicago’s Field Museum of Natural History, would surely be proud of the newest member of the Hall of Fame.

Family members who will be on hand for Mike’s induction include Lorie, his wife of nearly 37 years; his parents, Marilyn and Gary; his brothers and their wives, Matt (Michelle) and Mark (Karen); and Mike and Lorie’s children, Joe (Charlotte) Orthober and Susie (Ed) Haen.