The seed pods of a wild, native perennial herb, collected in great quantity by us boys during World War II, led me to believe we were helping to save some sailors’ lives. The task was easy and important work especially when I had an older brother, Ivan, serving on a U.S. Navy patrol craft in the South Pacific.

Perhaps few people have heard of the Silk Tree and the Silkweed. Silk Tree is another name for the Kapok Tree. Its seeds are contained in six-inch-long football-shaped pods. The inner fibrous floss-attached to the seeds is composed of hollow strands that are impervious to water. Their outstanding qualities, buoyancy and resiliency, made this material perfectly suited for manufacturing life preservers. Most of this valuable substance was imported from Indonesia, and when the supply line to that country was cut off during the war a substitute had to be found. This is where we innocent young junior high kids entered the picture in the fall of 1942. 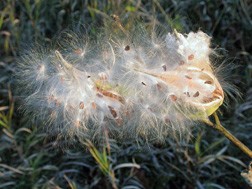 Silky strands of the Common Milkweed seeds gleam in the morning sunlight.

As often as we children blew the feathery seeds of milkweeds, also called silkweeds, into the autumn breezes, perhaps on one of our famous and adventurous “long-cuts” home from school, little did we know that in a few years we’d be gathering burlap sacks full of them to help in the war effort.

Experts in their search for a suitable material discovered that the long silky fibers attached to the seeds were hollow and also coated with wax. Here was a perfect life preserver material growing abundantly along roadsides, in abandoned fields and waste places, and in fact right in the backyards of many Americans. It was also found through tests that 3½ pounds of the silky hairs would keep a man afloat for three days.

By this time you are probably wondering how this very small amount could possibly support the weight of a full-grown person. Obviously it is related to the great amount of air inside the fibers, as well as that trapped between them, that does the trick.

Here is something that you may wish to do. I can assure you it will be an enjoyable as well as an unusually good learning experience. Get an unopened milkweed pod and bring it indoors. Spread a sheet of newspaper before you, carefully open the pod and begin taking out the seeds fastened to the hundreds of thin gossamer strands. I counted the seeds of the pod I examined and found that it contained 187.

The hairs will dry quickly and, if you’re careful, you will soon have a delightful mound of the softest, lightest, fluffiest material imaginable. Time after time, in the still air of our study, I lifted a seed that was attached to its magnificent little parachute, then released it allowing it to float back to the table. (Did that ever bring out the little kid in me!) That proved to be a delightful sight plus a perfect enactment of the words “light as a feather” and “slow motion.”

Suddenly I was reminded of an incident I had with my seventh and eighth grades during my first year of teaching at Shorewood Hills in Madison 60 years ago this fall. One of our activities that fall involved the study of seeds. A shopping bag full of milkweed pods was brought in by a student, far more than we needed. I was never one to throw things away, thinking that there might be a use for them some day. Consequently the surplus pods were put into one of the lower back cupboards and forgotten.

Imagine our surprise several weeks later, when cleaning out cupboards in preparation for parent visitation week, to be greeted with an outpouring of hundreds and hundreds of milkweed parachutes. The kids were overjoyed with the discovery and as temporarily angry as I was with the mess of the seeds, I really did think it was pretty cool! I was soon laughing along with them and marveling at the unexpected lesson provided by nature.

Another later discovery upon scrutinizing the little pile of “angel fluff,” led me to think about the birds and their feathers. I gently put the fingers of both hands into the mound of silken hairs and immediately realized the great warmth. What marvelous insulating qualities this plant down possesses, the very same principle that helps birds survive in freezing temperatures. The continuous heat given off by my hands as well as other parts of my body was now being trapped and held close to my skin, thereby warming it considerably. 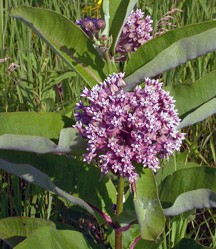 A Common Milkweed in flower shows its intricate blossoms.

The simple act of thoroughly observing a milkweed pod and its seeds not only proved to be the great beauty to be found therein, it also led me to more fully appreciate the fine qualities of this great plant. Early settlers in our country were known to use the feathery hairs as pillow stuffing. No doubt it brought about many sweet dreams!

I, too, can more easily dream of the light-winged Monarch Butterflies as they head for their winter roosts in the mountains of central Mexico, who as larvae ate nothing but the milkweed leaves in the backyard. Many Baltimore Orioles cradled their young in silvery gray nests made entirely of the long strong, silky strands of milkweed stem fibers.

Fall would not be fall without the thousands of shimmering skeins of silk dotting the back meadow under the lull of the Indian Summer sun, the plant so important to Monarch Butterflies and birds as well as certain children!

I glance outside at the butterfly flower bed containing especially the tall healthy native perennial Swamp Milkweed I bought from Jerry’s Flowers in Sister Bay a few years ago. Most of its pods are already open and releasing the parachuted seeds to the fall winds. Tomorrow I will give the remaining unopened pods a helping hand so as many of the seeds are released as possible. Here’s hoping every one of the seeds develops into a vigorous new plant!