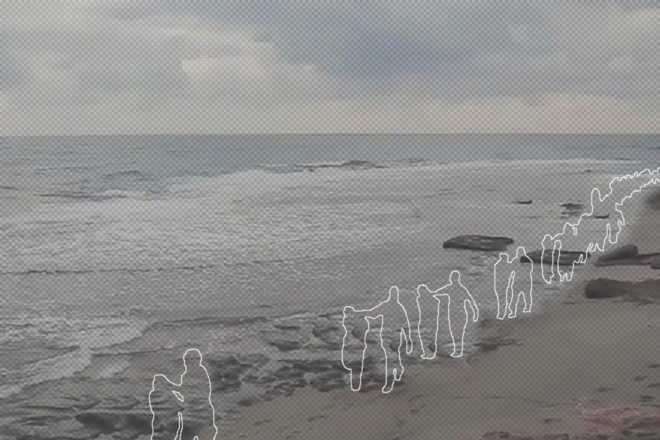 Humans are also absent from the pieces in its newest exhibit, Landscapes of Absence by Brandon Bauer, yet that absence makes the landscapes recognizable, formed as they are by the tragedies that occurred there.

“This is probably one of the hardest exhibits to show and for the community to talk about,” said Helen del Guidice, curator of exhibitions and collections at the museum. “It’s not typically what people here come to the Miller Art Museum to see.”

Landscapes of Absence examines terrorist propaganda, and specifically, the ISIS videos that were widely circulated during the mid- to late 2010s. Bauer, an associate professor of art at St. Norbert College in De Pere, removed the violence and the people from the infamous images and replaced them with outlines of their forms. He used this approach to respect and honor the victims without including the brutality, and to point out how curated the videos were for Western audiences.

“What ISIS was doing in particular really kind of anticipated many different ways of how propaganda is functioning now,” Bauer said. “These were all videos that were released that were highly edited, highly scripted, highly polished, titled.”

The videos aren’t the type filmed in a bunker with a banner behind a terrorist. Instead, these were shot in the open with a wide frame using English speakers from Western cultures – two of the speakers were a German rapper and a British model.

“They had other videos,” Bauer said, “like rock-band videos that were for internal, for the territories they control. They were trying to show, you know, ‘We’re good government’ to the internal citizens, but they were showing these to us.”

He said he remembers seeing the first video – of journalist James Wright Foley’s beheading – and being struck by both the horror of it and how vastly different it was from the typical terrorist propaganda videos he’d seen before. The videos consumed him, he said, and he started to dig into and analyze the visual connections the terrorists were trying to make.

“They had their own media-production companies, and they were created for Western audiences specifically,” Bauer said. “They were trying to frame what they were doing in this kind of, you know, apocalyptic language of the clash of civilizations.”

When he approached this work, as with many of his exhibits, he said research was critical to him. That care and attention to detail were additional reasons why, del Guidice said, the museum wanted to feature Bauer’s work at the Miller.

“First, it’s new,” she said. But more than that, “I support artists, and when I see an artist taking on such a serious topic, I find that very brave, and I want to support them.”

Del Guidice said she learned from the exhibit, and helping the community do the same is one of her jobs as curator. The subject of the exhibit is “a serious matter that the general population doesn’t hear about but that affects them,” she said. “It’s very complicated because it affects lots of people, including military families.”

A Digital Artist Is Grown

When Bauer was young, during the height of the Cold War, his grandfather used to tell him and his cousins stories about his time as a Marine during World War II. Bauer said he believes his grandfather – who was stationed where the first nuclear weapons were launched – was trying to make them understand how horrible war could be.

“When I was a kid, I would draw these drawings kind of based on the stories that he was telling me,” he said. “And my mom was, like, horrified. But I think that I was just – as a child – wrestling with the kinds of stories he was telling me and trying to really internalize and understand them. And I think it was really foundational.”

That need to understand has developed into professional work that explores not only terrorism, but also climate change and nuclear weapons, and it incorporates digital aspects as it does so. Throughout Bauer’s career, he’s felt a responsibility to address the world’s problems through his art.

“Whether it’s terrorism or the climate crisis,” he said, “whatever’s kind of in our present moment, we need to digest and process and find a new way to look at it.”

The exhibit examines terrorist propaganda, but any media consumption should be filtered through that same critical-thinking lens, Bauer said. Observing and critiquing are at the core of an artist’s practice – “whether that is observing a flower and painting it with fidelity and expression or whatever, or observing the media and being critical about it,” he said.