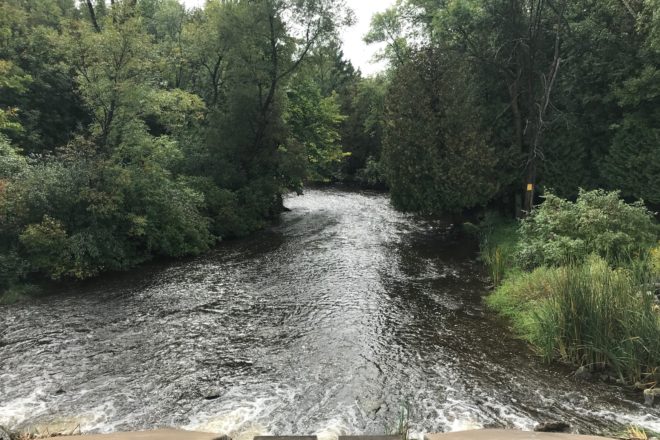 Opponents of Door County’s plan to draw down the Forestville Millpond for two years as a no-cost way to reduce the sediment in the pond believe spring meltdown and heavy rains will wash the sediment down the Ahnapee River (pictured here flowing south from the Forestville dam), with some of that ending up on Algoma’s Lake Michigan shore. They plan a citizen water-monitoring campaign during the drawdown. Photo by Jim Lundstrom.

The Friends of the Forestville Dam have again submitted a list of names to Door County Clerk Jill Lau to start the process for a recall of District 3 Supervisor Roy Englebert. An earlier recall attempt failed when some of the signatures were not verified.

“I think it’s going to go through for sure. I have 218 names,” said Village of Forestville President Terry McNulty, who is also one of the leaders of the movement to stop the county from the pond drawdown, which is scheduled to begin Nov. 1.

McNulty said he had no option other than a recall after attempting to connect with Englebert, who also serves as chair of the Town of Forestville board. The group decided not to seek a second recall against District 2 Supervisor John Neinas, who abstained from voting on the project because he owns property on the disputed body of water. Neinas has said he will not run again in the spring.

“After the other recall was rejected, I reached out to Roy with an email and said I’d rather work with him and do something good for Forestville, and I got no response,” McNulty said, adding that he also tried a telephone call and even had a mutual friend ask Englebert to talk with McNulty, to no avail.

“I think we will have a recall here in Forestville,” he said.

McNulty added that he and some of the residents who live on the millpond have been in touch with an attorney and are considering whether to seek an injunction to stop the planned drawdown.

“I actually got a commitment of over $10,000 from those residents to legally fight this,” McNulty said. “I think the next step is to let the attorney do her job. Nobody’s listening to us. It’s time for [the county] to talk to an attorney that has an objective, and our objective is to stop the drawdown.”

McNulty said if there is a recall, he will support Village of Forestville board member Lora Jorgensen, who, either way, said she will run again in the spring election.

“The county board made a lot of bad decisions and stirred up some stuff they didn’t need to,” McNulty said. “Every one of them is up for election next spring. It’s time for some fresh blood. The way Ken Fisher talked back to Lora Jorgensen [during a county meeting on the Forestville Millpond], I would love to have him have to work with her. I know she’ll stand up for our area.”

“There’s some changing of the guard that needs to happen on the county level with the supervisors,” Jorgensen said. “Years back, some of these guys have done some really great things for the county, but they’re not understanding that dynamics change over the years. You can’t stay in the same mindset you were in 20 years ago, dealing with problems from 20 years ago, because problems are totally and dramatically different now. It’s unfortunate that some of these people have been stuck in that time warp, where they’re not thinking proactively anymore for future generations. As far as the recall goes and the election in the spring, that’s where I stand. There needs to be a changing of the guard for several of these positions because the general public is just not happy with what they’re doing anymore.”

Specifically on the millpond project, Jorgensen said county board members did not consider the environmental impacts of the drawdown.

“My prediction: I think the next spring is going to be an absolute catastrophe in Algoma, on the beaches and at their marina,” she said. “I feel that next spring and early summer is where everybody is going to see what really happens here – just one of the repercussions. It’s going to have to be in everyone’s face before they understand it. It’s unfortunate we have to make decisions and go forth knowing there are going to be repercussions and not know how bad they are going to be. I think it’s going to be a disaster. It will take that for everyone to wise up.”