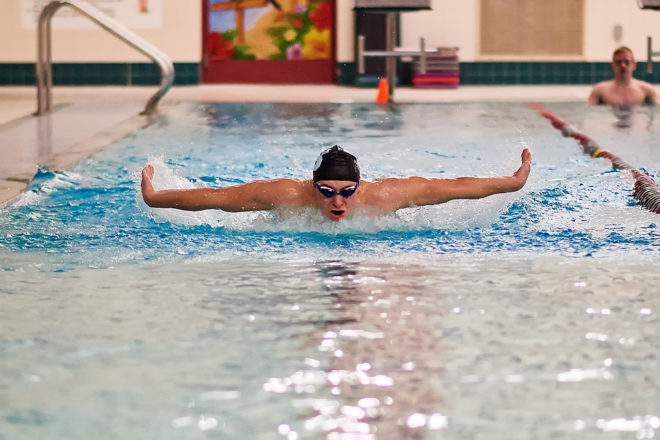 Southern Door senior Brock Aune has earned a scholarship at the University of Minnesota, but his first goal is a return to the podium at the state swim meet. Photo by Len Villano.

Pardon Southern Door’s Brock Aune if a swimming scholarship to the University of Minnesota isn’t on the top of his mind these days. The Sturgeon Bay Co-op swim team member has a high school swimming career he’d like to finish out strong first.

Aune, a senior at Southern Door, placed second in the 100-yard breaststroke and third in the 50-yard freestyle at the Division 2 state meet last season and said a return to the podium in Madison is priority No. 1 right now.

“I’m looking forward to some fast swimming to end my high school career,” said Aune, who also qualified for the state meet in 2018. “There are for sure some goals I haven’t previously met that I’d love to accomplish before leaving for college.”

Based on who returns from last year’s state meet, there’s no reason why Aune couldn’t repeat another strong performance. Edgewood’s Truman teDuits returns after edging out Aune by .67 seconds in the 100-yard breaststroke. Lakeland Union’s Liam Hogan and Aune have the top times of swimmers returning in the 50-yard freestyle.

“I’m really looking forward to [the possibility of] competing at state again this year,” Aune said. “But I’m equally excited to hopefully bring a strong team with [me,] too. I think everyone is in a great place right now, and I think it would be awesome to see us succeed as a team at the state level.”

The Clippers have 11 swimmers on the roster, including five swimmers who competed at the state meet last year. Joining Aune on this list are junior Luke Bousley and sophomores Drew Rass, Ethan Almstadt and Jacob Norton. Bousley placed 13th in the 100-yard freestyle, and he joined Aune, Rass and Almstadt for a 15th-place finish in the 200-yard medley relay. Norton, Almstadt, Bousley and Aune placed 10th in the 200-yard freestyle relay.

“Last year’s experience benefited me by providing me with a greater understanding of what I need to work and improve upon,” Bousley said. “The state meet helped me to set very high goals for myself and my team. It gave me a view of competing at a very high level and how to have the correct mindset of being humble and grateful when participating against others.”

The improved depth helped Sturgeon Bay Coach Jeff Norton win the first meet of his tenure. The Clippers won a triangular with Brillion-Chilton-Valders and Manitowoc-Two Rivers by winning nine of 11 events and placing second in the two events they didn’t win.

“With an 11-man team now, we can do a lot more damage at duals and invites than was previously possible,” Aune said. “In addition to these numbers, we have some depth that we haven’t seen before. This year we have enough fast swimmers to clinch a lot of first, second and third [places] in a lot of races and rack up a lot of points. Previously, we could have one fast swimmer in each event, but not enough kids to score those seconds and thirds.”

The decision to attend the University of Minnesota solidifies the pipeline between Door County and Minneapolis-St. Paul. Aune will be the third Sturgeon Bay athlete to swim for the Gophers, following Conner McHugh and Max McHugh. Conner had a distinguished career with the Gophers, and Max – a sophomore – earned two All-American honors during his freshman season.

“While at the U, I’ll be surrounded by world-class coaches and a great group of teammates,” Aune said. “Academics were also a large factor as well as being able to find a balance between athletics and academics. The U just has so many opportunities that I really couldn’t pass up.”

Bousley said he’s looking forward to the season as it progresses and added that he’s taken a different approach to training.

“My own confidence has changed because I have learned what to expect throughout the season and I have figured [things] out during different parts of the season,” Bousley said. “I should focus on different things. For example, I understand the beginning of the season, I focus on endurance training, and the end of the season focuses more on speed training.”

Aune said he has decided not to overthink as his career winds down and he works toward another run at a state title.

“Honestly, this year I want to just have a little more fun with it,” Aune said. “I’m still working insanely hard and have a lot of goals. I think in previous years I’ve gotten too focused and beat myself up, and that ended up working against me, so right now I just want to have fun with my races and learn from my mistakes. There for sure is a lot of pressure as I want to build on last year’s performances, but learning to incorporate a better attitude and kind of trusting the process has been more important to me this season.”