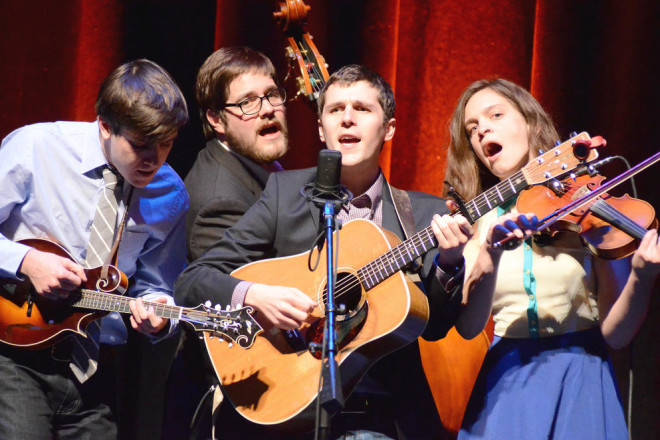 Hear renegade traditionalist band Mipso and their three-part harmonies of Appalachian influences when they perform March 9 at White Gull Inn.

Mipso, a North Carolina quartet known for combining a traditional string band format with close harmony and a variety of modern influences, will perform at the White Gull Inn in Fish Creek on Wednesday, March 9.

Mipso, who consider themselves “renegade traditionalists,” are doing their part to take three-part harmony and Appalachian influences into new territory. The band consists of Joseph Terrell on guitar, Wood Robinson on double bass, Jacob Sharp on mandolin, and Libby Rodenbough on fiddle.

Formed in Chapel Hill in 2010, the four North Carolinians have been touring the country since the release of their 2013 album, Dark Hollow Pop, which also featured members of Chatham County Line, Town Mountain, and Mandolin Orange. Dark Holler Pop was an exploration of bluegrass instrumentation and arrangements, with most songs featuring banjo and fiddle.

An optional pre-concert fixed price dinner will served at 6 pm. The menu consists of Stout Braised Short ribs over horseradish scented mash potatoes, salad and dessert, which will be Chocolate Orange Guinness Cake.

Tickets for the 8 pm concert are $17. Tickets, reservations for the pre-concert dinner and information can be obtained by calling the inn at 920.868.3517.