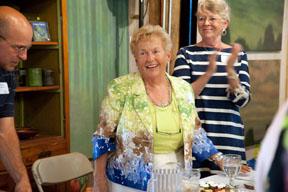 Miriam Erickson has served on many boards, including the Gibraltar School Board.

For Miriam Erickson of Egg Harbor, a difference made is far more important than a title earned. Ironically, that selflessness has earned her one more title – Door County Community Foundation Philanthropist of the Year.

“The award for Philanthropist of the Year is given to somebody who’s more than simply a donor,” says Bret Bicoy, President and CEO of the foundation. “Our board of directors looks for people whose actions are as inspirational as the dollars they give to charity.”

Miriam Erickson has served on many boards, including the Gibraltar School Board.

Bicoy says Erickson, a Gibraltar School Board Member, is the epitome of what the Community Foundation looks for in a philanthropist. Erickson moved to the peninsula in 1954 as a county extension agent through the UW-Extension program, and eventually got into the tourism industry.

“I met my husband and we were living in Door County and we decided that we were going to go into summer resort work,” Erickson says. They built The Shallows Resort in Egg Harbor, now run by their daughter and son-in-law, Liz and Bob Dickson. Eventually Erickson wanted to become more involved in the community.

“There was a teaching position open, and I applied because we decided that we were definitely going to stay in Door County,” Erickson says. She was hired at Gibraltar in 1960 as a Home Economics teacher, and held that position for eight years before becoming the high school librarian.

“Home Economics was being phased out,” she says. “It broke down into various other components. I had an interest in getting an advanced degree and thought that library science would be a great bridge. I thoroughly enjoyed it.”

“Everybody loved Miriam,” says Iva Grasse, Secondary IMC Clerk at Gibraltar. “You could go to Miriam for any problem you had, and if she couldn’t solve it she’d find out how she could solve it.” Erickson also played a big role in bringing technology to Gibraltar.

Before personal computers were available, Erickson got her hands on a terminal that linked into the University of Wisconsin – Green Bay’s mainframe.

“I could have students get on to use programs out of UWGB,” she says. When the university took the terminal back, Erickson didn’t give up.

“I vowed that when PC’s came that they would be such an integral part of my service to the school that there was no way they were ever going to take them away again,” she says.

Erickson helped create the first computer network in the area at Gibraltar in the early 1980s, and when a this obscure new thing called the World Wide Web came along, it was a white-haired librarian peeking over reading glasses that pulled students and the school into the new century, even as she neared retirement. She patrolled the computer lab, extolling the virtues of the Internet to teenagers who didn’t yet know the wonders of a chat room or a Netscape search.

“We were a small school and I tried to write for grants,” Erickson says. “I was told by superintendents that we wouldn’t get anything, and I decided that we’d put the whole county together.”

“She came with the facts and she presented them and she got everything she needed,” Grasse says. “If it wasn’t for her that school wouldn’t be what it is.”

Erickson retired as librarian in 1999, but when a vacancy opened on the school board, she jumped at the opportunity. Now in her third full term, she continues to advise the board on technology, but recognizes that education has much more depth.

“I went to China and I came back to the school board and I told them that one thing we still had going for us that the Chinese did not have is that we had creativity,” Erickson says. “If it can be produced or done on a computer, it’s probably going to be outsourced.”

Erickson is a strong advocate for the arts at Gibraltar as well.

“You have to have both,” she says. “In schools that are cutting out music and art, where do you develop a lot of creativity? I think we need it all, and at Gibraltar we have the four A’s, the academics, arts, activities and athletics. We need well-rounded people.”

Erickson walks the walk. Besides being heavily involved at Gibraltar, she serves on the executive board at Birch Creek Music Performance Center, the Door County Library Foundation Board, the Nicolet Library System Board, and the CESA 7 Board of Control. She is also a trustee at Hope Church, and is the president of the Council on Library and Network Development, a board appointed by Wisconsin’s governor to advise the state superintendent of schools.

“That keeps me fairly busy,” Erickson says. “You have to be there in the forefront; you have to be on your toes and keep people informed of what’s coming. You don’t do that just sitting behind a desk. You have to be active in your community.”

Grasse remains awed by what Erickson has accomplished.

“If I could do what she’s done in just her little finger I would have accomplished a lot,” Grasse says. “She’s the most giving person in the world.”