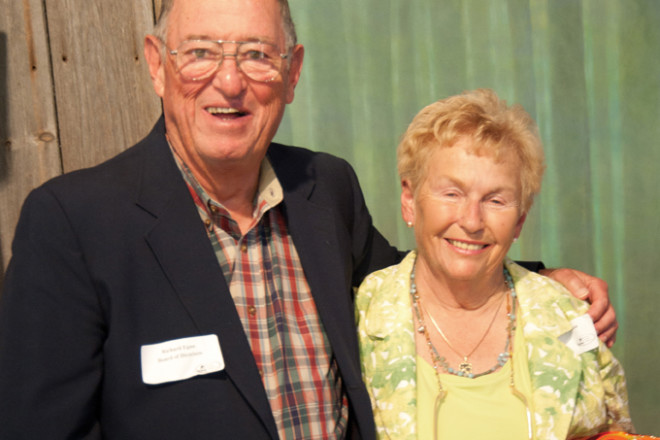 For Miriam Erickson of Egg Harbor, a difference made is far more important than a title earned. Ironically, that selflessness earned her one more title in 2010 – Philanthropist of the Year.

“The award for Philanthropist of the Year is given to somebody who’s more than simply a donor,” said Bret Bicoy, President and CEO of the Door County Community Foundation (DCCF), which bestows the honor. “Our board of directors looks for people whose actions are as inspirational as the dollars they give to charity.”

Bicoy said Erickson, a Gibraltar School Board Member, is the epitome of what DCCF looks for in a philanthropist. She moved to the peninsula in 1954 and decided to open the Shallows Resort in Egg Harbor with her husband. Eventually Erickson wanted to become more involved in the community.

“There was a teaching position open, and I applied because we decided that we were definitely going to stay in Door County,” Erickson said. She was hired at Gibraltar in 1960 as a Home Economics teacher, and held that position for eight years before becoming the high school librarian.

It was Erickson who pushed Gibraltar forward into the new age of technology and education. When other educators were dubious about computers and the role they could play in education, Erickson saw the possibilities, and the inevitability.

“We were a small school and I tried to write for grants,” Erickson said. “I was told by superintendents that we wouldn’t get anything, and I decided that we’d put the whole county together.”

“She came with the facts and she presented them and she got everything she needed,” said Iva Grasse, Secondary IMC Clerk at Gibraltar. “If it wasn’t for her that school wouldn’t be what it is.”

Her drive continues to pay dividends two decades later, as Gibraltar remains at the forefront of technology education. She retired as librarian in 1999, but didn’t leave the school. She soon won a seat on the school board, where she continues to advise the board on technology. Erickson is a strong advocate for the arts at Gibraltar as well.

“You have to have both,” she said. “In schools that are cutting out music and art, where do you develop a lot of creativity? I think we need it all, and at Gibraltar we have the four A’s, the academics, arts, activities and athletics. We need well-rounded people.”

Erickson walks the walk. Besides being heavily involved at Gibraltar, she serves on the executive board at Birch Creek Music Performance Center, the Door County Library Foundation Board, the Nicolet Library System Board, and the CESA 7 Board of Control. She is also a trustee at Hope Church and is the president of the Council on Library and Network Development, a board appointed by Wisconsin’s governor to advise the state superintendent of schools.

“That keeps me fairly busy,” Erickson says. “You have to be there in the forefront; you have to be on your toes and keep people informed of what’s coming. You don’t do that just sitting behind a desk. You have to be active in your community.”