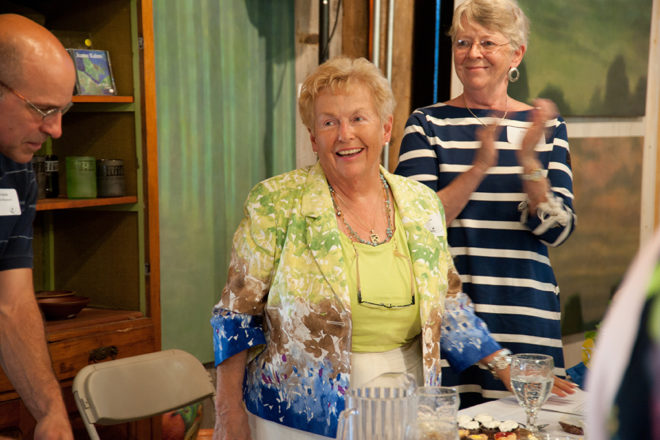 Miriam Erickson is pictured after being honored as the Philanthropist of the Year by the Door County Community Foundation in 2010. File photo.

Longtime Gibraltar School librarian Miriam Erickson will soon add another honor to the long list of accolades she’s earned in a lifetime leading innovation in education.

The Wisconsin Heritage Center has chosen Erickson as the 2022 inductee into the Wisconsin Library Hall of Fame – an honor bestowed upon those who have made exceptional contributions to statewide library service over a sustained period.

Erickson spent 30 years as a school-library media specialist at Gibraltar High School, where she was an unwavering force that drove Gibraltar forward in library and internet technology. When other teachers and staff feared technology, Erickson pushed forward with an effort that resulted in Door County schools becoming some of the best connected in the state in the early days of the internet in the 1990s.

“I knew this technology was the way things were going, and my philosophy was to work with the people who were positive and wanted to move ahead,” she told Door County Living in 2015. “I wanted to be on par with the school districts in Neenah, Appleton and the best schools in the region.”

In 1991, Gov. Tommy Thompson appointed Erickson to the Wisconsin Council on Library and Network Development, and five different governors after that appointed her to successive three-year terms.

On a national level, Erickson was a delegate to the White House Conference on Library and Information Services in 1991 and helped to create a political platform for national library advocacy for years. Through her work on the Wisconsin Department of Public Instruction’s PK-12 Technology Plan Committee, she promoted the use of educational technologies of all types. And, though Erickson retired as a librarian in 1999, she continues to be an advocate and remains active in library, educational and cultural activities in Door County and the state.

Erickson’s accolades include being named the 1984 Wisconsin Library Association’s (WLA) School Library Media Specialist of the Year and earning the 1986 Wisconsin Educational Media Association’s Special Service Recognition Award and the 2000 WLA Trustee of the Year Award. In 2010 she was named Philanthropist of the Year by the Door County Community Foundation.

The Hall of Fame induction will take place Nov. 3, 7 pm, during the Wisconsin Library Association’s annual conference at the Grand Geneva Resort & Spa in Lake Geneva.