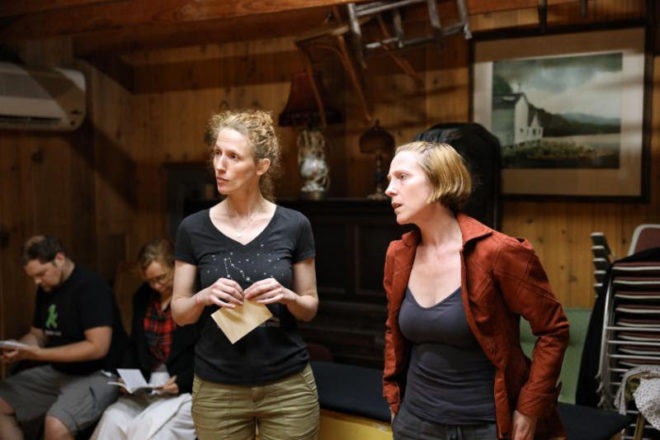 (Left to right) Actors Cassandra Bissell and Maggie Kettering in rehearsals for Miss Holmes. In the background, actors Dan Klarer and Barbara Robertson study their scripts while waiting for their cues. Photo by Brian Kelsey.

Arguably the most popular fictional character ever created, Sherlock Holmes is perhaps also the most written about imaginary person.  Holmes first appeared in print in 1887 in Sir Arthur Conan Doyle’s A Study in Scarlet. The book Universal Sherlock Holmes, compiled by Ronald B. De Waal, lists more than 25,000 Holmes-related productions and products. Among them are plays, radio and television programs, children’s books, cartoons, comics and more.

Conan Doyle’s work has been translated into 65 languages, including braille and shorthand. Holmes’ adventures, and those of his descendants or relatives, have been continued by numerous authors in Conan Doyle’s style. No other character in recent literature continues to grow in demand or popularity.

In recent years, the BBC has brought Sherlock into the 21st century and CBS’s Elementary introduced a female Dr. Watson. In April of this year, Japan’s Miss Sherlock debuted on HBO Asia, introducing a contemporary female crime fighting duo to Asian audiences.

Playwright Christopher M. Walsh was first introduced to the Sherlock Holmes character through the Sesame Street character Sherlock Hemlock. “I have vague memories of seeing episodes from some of the older British TV series on PBS,” he said. “I was in high school when I first started reading the original Doyle stories.”

Walsh is an actor and playwright based in Chicago, Ill. He grew up in Muskegon, Mich., and moved to Chicago to study acting at Columbia College. As an actor, he has performed with a number of Chicago theaters including Lifeline Theatre, the House Theatre of Chicago, the Factory Theater Company, Strawdog Theatre, A Red Orchid Theatre, Griffin Theatre, Right Brain Project and City Lit Theater Company. His television credits include Chicago Fire (NBC) and Betrayal (ABC).

Walsh and his wife, Mandy, are big fans of the BBC series Sherlock and were curious about the CBS TV series Elementary when it first came out in 2012.

“After watching the pilot, Mandy and I had a long talk on our couch about how the dynamic changed by casting a woman as Watson,” Walsh said. “We both liked the idea but thought the casting would be more significant had the stories been set during the original time period. It was a short leap from there to the idea of writing a play about a female Sherlock and Watson navigating Victorian England.”

Walsh’s first draft was a direct adaptation of Doyle’s A Study in Scarlet, when Watson and Sherlock first meet. Walsh’s adaptations of Alexandre Dumas’ The Count of Monte Cristo and Charles Dickens’ A Tale of Two Cities were produced by Lifeline Theatre. 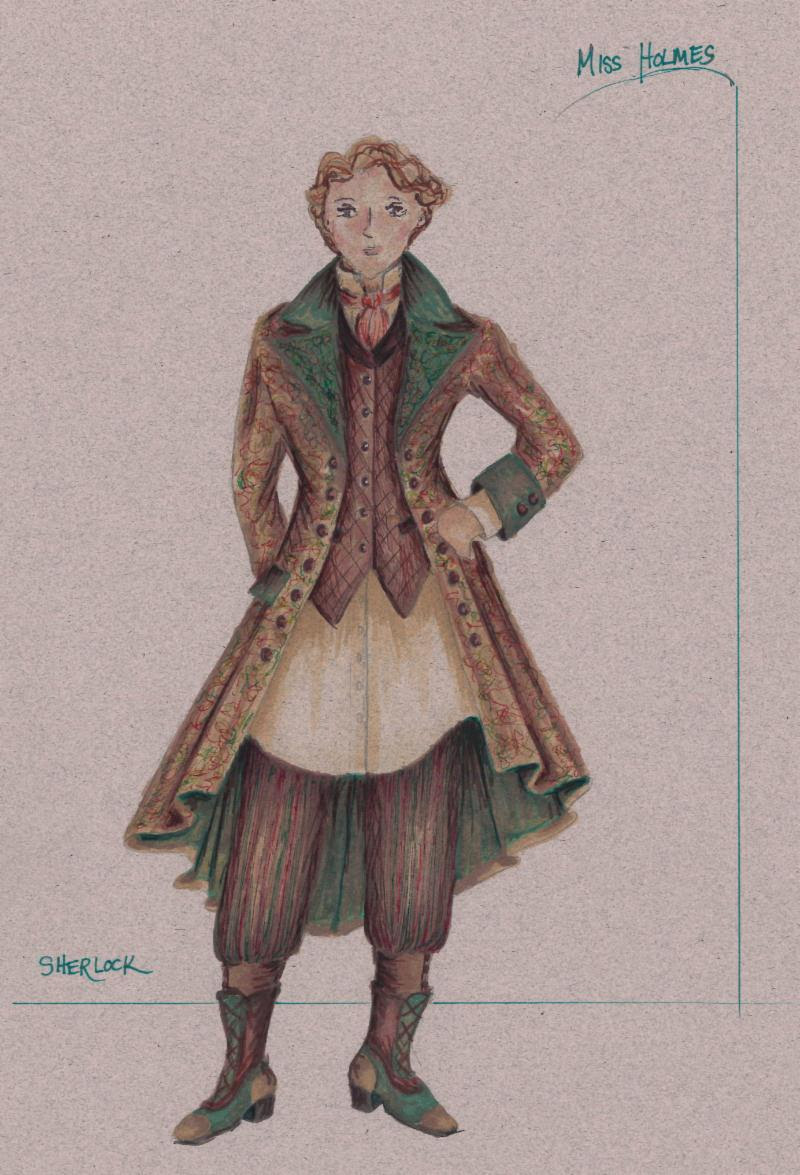 “While readers were enthusiastic about the idea of a female Sherlock and Watson, the general response to my (early) script was, ‘Meh,’” he said. “The plot didn’t do anything to enhance the themes I was trying to address.” Then came something called “Not in Our House.”

In 2016, an exposé on abusive treatment to the casts of Chicago’s Profiles Theatre spurned two women to organize a community meeting. They decided enough was enough, Walsh said. The efforts of Laura T. Fisher and Lori Meyers and this meeting became the impetus to create what is now called the Chicago Theatre Standards, a collection of guidelines and suggestions for creating safe spaces in which to create art. The movement was dubbed “Not in Our House.”

“‘Not in Our House’ provided a forum for people who had experienced abuse and harassment in the theater to share their stories,” Walsh said.  “Their bravery fueled my next attempt at a draft of Miss Holmes.”

Lifeline Theatre liked Walsh’s new draft and produced the mystery in 2016. The Chicago Tribune called the production “cunning and highly enjoyable” and wrote, “Walsh’s take suggests, with sympathy and wit, that being the world’s greatest detective is even harder when one is metaphorically doing it backward and in high heels.”

The production caught the eye of Peninsula Players Artistic Director Greg Vinkler and he added Miss Holmes to the theater’s 2017 winter play reading series, The Play’s the Thing. Audiences loved Cassandra Bissell as Sherlock and Maggie Kettering as Dr. Watson. Both actors reprise their roles for the full stage production at Peninsula Players this season.

Both actors and director Elizabeth Margolius are discovering the nuances of the characters and script through the rehearsal process.  Margolius directed last year’s production of The Bridges of Madison County for the Players.

Bissell and Kettering are Peninsula Players veteran performers who have portrayed other strong female characters. Kettering was last seen on stage in Outside Mullingar and Lend Me a Tenor. While Door County audiences will recall Bissell’s performances in Proof, A Man for All Seasons, Opus and Around the World in 80 Days.

“Christopher does a magnificent job of exploring the many layers of unconventional women during a time when most were not taken seriously,” Margolius said. “While at the same time weaving a classic Sherlock Holmes mystery with all the twists and turns one might expect.  It has been fun to explore how where one stands or is perceived to stand on the social ladder affects their behavior and interactions. In addition to having a few characters who are actual historical figures from the time period, the play deals with the treatment of intelligent, headstrong, independent women during an era where they were not often accepted as such.”

Walsh’s historical characters include Gottlieb Burckhardt and Elizabeth Garrett Anderson. Burckhardt, a Swiss psychiatrist with little experience of surgery, is commonly regarded as having performed the first modern psychosurgical operation in 1888.

“Anderson (who is portrayed by Barbara Robertson) was an incredible person – she was the first woman to openly qualify in Britain as a physician and a surgeon,” Margolius said. “She was the co-founder of the first hospital to be staffed by women among many other accomplishments. She was also a mayor!”

Door County audiences can travel the cobblestone streets, hospitals and parlors of Victorian England with Miss Holmes at Peninsula Players from July 4 through July 22.  For more information on the Peninsula Players production of Miss Holmes call 920.868.3287 or visit peninsulaplayers.com.

Audra Baakari Boyle is the Peninsula Players Business Manager and believes when you have eliminated the impossible, whatever remains, however improbable, must be the truth.